Review: An LGBTQ Take on How “Rent: Live” Almost Realized Its Potential 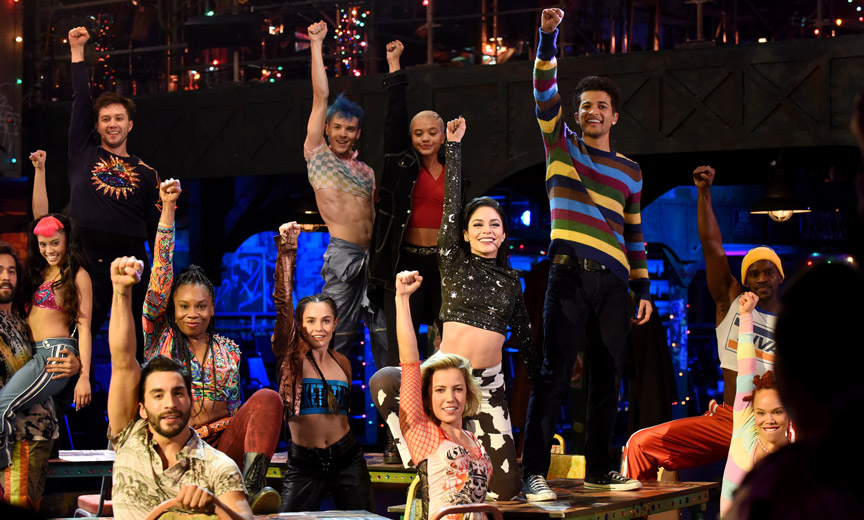 We offer an LGBTQ review of how Fox’s television production of the musical Rent was pretty lively despite being not-quite-live.

Rent: Live – A Change in Plans

If you watched Fox’s production of Rent: Live, then you know that it was not exactly live. Early in the broadcast, the cast showed up to inform viewers that – because the show’s Roger (Brennin Hunt) had broken his foot in rehearsal, they would primarily air footage from a recorded dress rehearsal. However, they noted, the show’s finale had been restaged so that Hunt could perform it with them – not to mention a special appearance by the original Broadway cast, featuring stars including Indina Menzel and Anthony Rapp.

So we’ll never know what we would have seen live. Would some rougher vocal moments have been overcome by the rush of adrenaline that comes from live performance? Would some of the show’s dizzying camerawork been adjusted to be easier on the eyes? That said, Rent: Live proved that Jonathan Larson’s contemporary adaptation of La Boheme – though now firmly a period piece – still possesses the power to thrill audiences with great songs, diverse romances, fabulous costumes and youthful energy.

What Rent: Live Got Mostly Right – The Cast

One of the chief complaints of the cinematic adaptation of Rent was that its characters are meant to be young, hungry artists and activists; however, because that production reunited most of the original cast of a show that had premiered more than a decade earlier, they had aged well past young and hungry. Yes, the decision gave the project extra star power but sapped it of the authenticity that drew young audience to stand online for hours in hopes of winning tickets via lottery. The vibrant cast of Rent: Live corrects this problem.

Though one could be forgiven for wondering why the production did not have an understudy for Brennin Hunt, he made for a very attractive would-be rock star Roger – appropriately gravel-voiced and moody and sporting a delightfully tight pair of plaid pants. Opposite him, Tinashe was a spectacular Mimi: vocally strong and displaying a perfect mix of sexiness and vulnerability for the drug-addicted exotic dancer.

The choice to cast Jordan Fisher as Mark lent added diversity to an already-meant-to-be-diverse cast and added smoothness to the character’s traditional whine. Brandon Victor Dixon was appropriately soulful as Tom Collins – tearing up his reprise of “I’ll Cover You” as any Tom should. And he had good chemistry with James Levya (better known to “RuPaul’s Drag Race” fans as Valentina). Their falling-in-love while climbing-on-playground equipment duet was lovely, and Levya brought plenty of his trademark sparkle to the role (though the character’s solo “Today 4 U” was probably the most underserved by the fact that the actor did not get another chance to do it live).


While we’re offering criticism, the show’s trope, which featuring various characters’ parents leaving voicemails for their children, was consistently poorly executed. For some reason, though performed a capella, they often managed to sound off-key. Perhaps they would have benefited from a second chance at doing it live, as well.

But back to the good stuff. As the cast’s biggest star (performing in the role that catapulted Idina Menzel toward superstardom), we had big expectations for Vanessa Hudgens as performance artist Maureen. Still, we were blown away by Hudgens’ huge voice and how she mined the performance for new layers of comedy. Her “Over the Moon” solo and big duet with girlfriend Joanne “Take Me or Leave Me” were high-energy highlights. Opposite her as Joanne, Kiersey Clemons was also in terrific voice; plus, she displayed a chemistry with Fisher’s Mark on their duet “Tango: Maureen” that felt like a nice nod toward the sexual fluidity that has flourished in the years since Rent played the Great White Way. To the largely thankless role of yuppie villain Benjamin Coffin III, actor Mario brought silky vocals and sex appeal (as did Taye Diggs when he played the role on stage).

What We Can Learn from Rent: Live

The number one lesson to take from Rent: Live is that future productions should have understudies prepared to go on. Part of the magic of theater is that – even if you attend it to see a star – there is someone waiting in the wings on any given night ready to give a performance that may make them a star. There is a singular magic to a live event that is simply not there when most of it is pre-recorded.

That said, I firmly believe this was on its way to being a fabulous production. The piece felt right for the format – honoring the original while allowing a show that would have always benefitted from a few close-ups during emotional moments to have them. It corrected the too-old-for-the-roles casting of the movie version, and felt suffused with energy that made the room in which I watched it want to sing along. Perhaps most importantly, Rent offers a worldview that celebrates a rainbow of sexual orientations and the value of a chosen family composed of people from diverse ethnic and socioeconomic backgrounds that feels more right today than ever. Its salute to creator Jonathan Larson, who did not live to see much of the show’s success, was an appropriately heart-tugging final flourish.

In a world where we have seen TV musicals that didn’t work at all (Peter Pan) and ones that mostly worked (Jesus Christ Superstar), this felt like one that really deserved to be revived live. Its cast and creators should be proud of their work, even though audiences may never know how much better it could have been if performed as originally intended.

For those who saw its broadway-shaking theatrical run, it’s hard to believe this year marks the 20th Anniversary of the debut of Rent, Jonathan Larson’s re-imagining of... 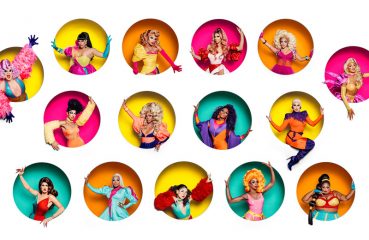 Even as the cast of “All Stars” is still vying for a place in the Hall of Fame, RuPaul set the world on fire by announcing the cast who will be in the running for the...