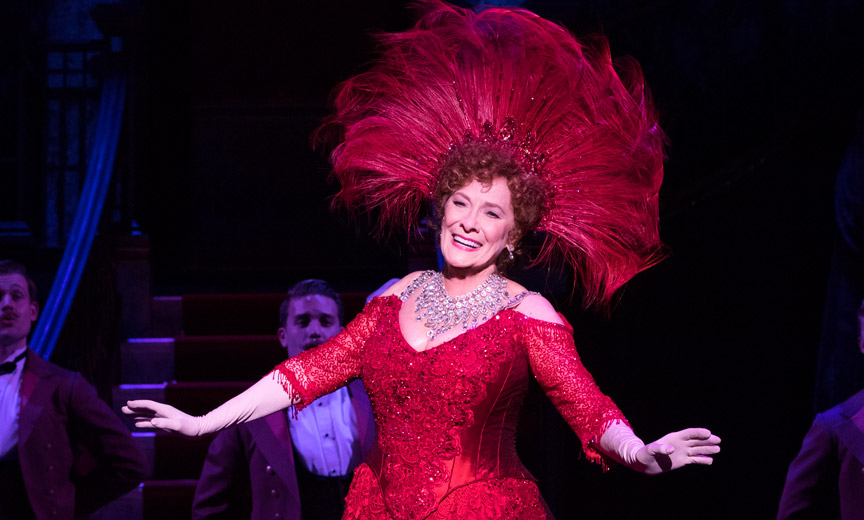 Betty Buckley is the latest Broadway diva to pick up the baton as irrepressible matchmaker Dolly Levi in the touring production of “Hello, Dolly!”

It’s the production that’s been the toast of Broadway since Bette Midler’s triumphant return to the Great White Way in 2017. And Buckley certainly has the Broadway credits to follow in Midler’s footsteps. As Hesione in Triumph of Love, Buckley was nominated for a Tony. For her portrayal of Grizabella in Cats in 1983, Buckley won a Tony.
And she later donned the turban of silent screen star Norma Desmond in Andrew Lloyd Webber’s Sunset Boulevard – which had won Glenn Close a Tony.

Buckley received a warm reception from a supportive and enthusiastic opening night audience at the Pantages Theater. She had been sidelined by a brief illness during its run at Segerstrom Hall the previous week. I was rooting for Buckley along with the rest of the audience and I’m happy to report that she did a commendable job.

Some might call the show’s plot dated, but it is redeemed by a fetching score which has stood the test of time. I was not able to see Bette Midler’s Tony-winning Dolly (for which some bought $1000 seats). Nor did I see Midler pass the baton to Bernadette Peters. So I can’t really compare Buckley’s performance to theirs. And maybe that’s a good thing. Perhaps it’s best to judge each Dolly as a separate and distinct take on an iconic role?

Her sheer vocal power is not what it once was, but Buckley brings a seasoned approach to the role and pulls it off with aplomb. The performance brought to mind hints of Angela Lansbury (who I think would have nailed Dolly). To Buckley’s credit, she wears the mantle of the iconic matchmaker well. She shines during the most important parts of the show. One such example is her triumphant return to the Harmonia Gardens, where she’s worshipped to the show’s title tune. Buckley’s comedic timing was also spot-on during the classic scene where she savors a meal, oblivious to the shenanigans around her.


Behind Every Great Buckley

Beyond Buckley’s performance, the supporting cast turns in commendable work that seemed to please the audience. However, for this reviewer, they seemed to miss the mark.

Lewis J. Stadlen as Horace Vandergelder is suitably gruff, miserly and misanthropic. However his character leans more toward caricature when depth would have served better.

Nic Rouleau as Cornelius Hackle impresses with goosebump-inducing vocals. This is especially true on his “Put On Your Sunday Clothes.” But his performance seemed a bit over-the-top, eager to remind us that we’re watching a MUSICAL.

Jess LeProtto turns in a winning performance as Cornelius’ sidekick/co-worker Barnaby. Unfortunately, his repeated “Holy Cabooses” refrains seemed more cloying than charming. I suppose one could argue that he’s just playing the part as scripted and fully committing to it. LeProtto’s performance evened out (and improved) over the course of the show, particularly when he had a chance to show off his rather impressive dancing.

As for Cornelius and Barnaby’s love interests, Irene Molloy and Minnie, played respectively by Analisa Leaming and Kristen Hahn, I can’t really fault their performances, but everything felt a little paint-by-the-numbers. “Ribbons Down My Back” is a lovely song, and while there’s nothing wrong with Leaming’s rendition, it sounded like something you might hear at a beauty pageant. She also missed opportunities to find more nuance and enrich her character.

The real heroes of this production are the chorus. Their energy, their collective vocal power and their energetic dancing rescue this revival. They even manage to provide the “oomph” that seemed to be lacking from the supporting cast.

Their indispensable contribution was particularly evident in the lead-up to Dolly’s highly anticipated return to the Harmonia Gardens. The Waiters’ Gallop dance sequence is almost as iconic as the Bottle Dance from Fiddler on the Roof. This crew brought it!

Then, when Buckley arrives, resplendent in her shimmery red gown and feathered headdress, the wait staff leave no doubt that Dolly is indeed back where she belongs. Was there much chemistry between Dolly and Horace – enough to make their eventual union plausible? I can’t really answer with a resounding yes. But the chemistry between the chorus and their star will likely mean this show may never go away again.

See what Steve thought of the touring production of Dear Evan Hansen. Or see what its songwriter Benj Pasek thought of Rent: Live. 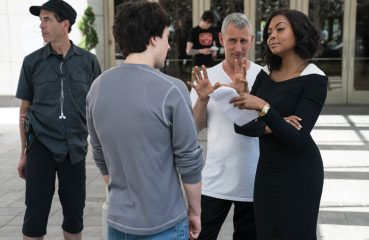 “Let us Guess: you probably best recognize the multi-talented entertainment mogul Adam Shankman from his judging stints on So You Think You Can Dance. But when we caught up... 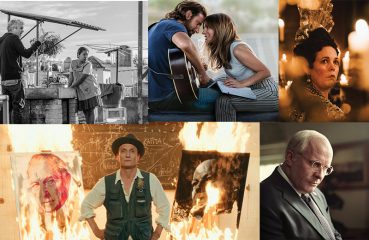 2019 Oscar Predictions from an LGBTQ Perspective

LGBTQ film critic Jonathan Roche predicts that, while there are many ‘prestige’ films in the running, this may be a year for popular films. Best picture COULD WIN: It’s a La...