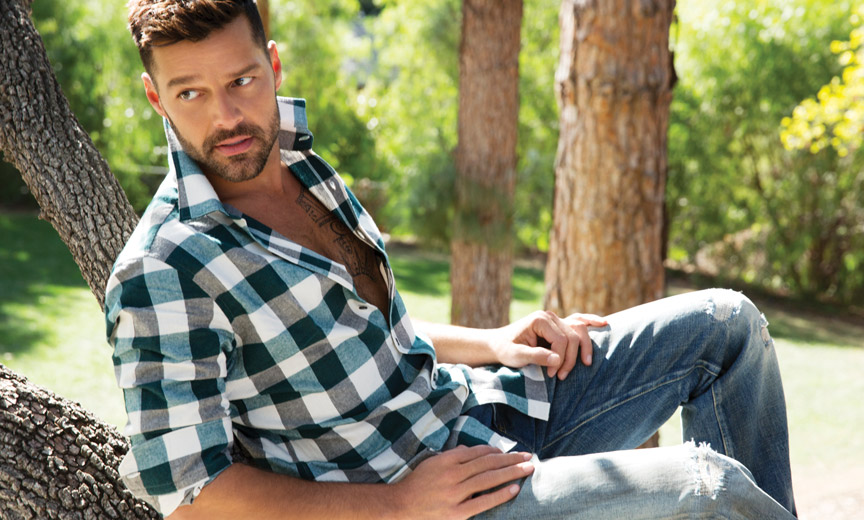 Ricky Martin offers us an exclusive interview on what to expect when he returns to the U.S. this fall with his exciting new concert tour — and how he’ll celebrate the holidays when he finally gets to take a break.

If American fans of the pop superstar have felt like they’ve been going through Ricky Martin withdrawal in recent years, that may be because it’s been since 2005 since he released a full album of new, primarily English-language material here in the United States.

But that doesn’t mean the superstar has been taking it easy. He’s created multiple popular Spanish-language releases, including his live MTV Unplugged and the massive studio album, Música + Alma + Sexo. In 2008, he became the father of twin boys (Matteo and Valentino), and then in 2010 he released the New York Times best-selling autobiography Me, which traced his extraordinary life — from starting out to superstardom to fatherhood. In 2012, theater fans had a chance to see Martin light up Broadway as Che in a revival of Evita, and it was also around this time that he became involved with the global television phenomenon The Voice. He would ultimately go on to sit in those famous spinning red chairs on both The Voice Mexico and The Voice Australia.

In fact, it is from the set of The Voice Australia that we caught up with Martin. His fans Down Under have already gotten a taste of his One World Tour, which played Oz in April and May, and their excited reviews of the extravaganza have already gotten fans here dancing with anticipation as the date of its arrival draws near.

In terms of the tour’s set list, Martin says the concerts will “of course” include tracks from A Quien Quiera Escuchar (To Those Who Want to Listen), a Spanish-language release that dropped in February of this year. But there will also be plenty of his mega-hits such as “Livin’ la Vida Loca” and “She Bangs.” The sound, Martin tells me, is a mix between “up-tempo and ballads — mixed with Caribbean Carnival.” On the Australian leg of the tour Martin even busted out his memorable duet, “Nobody Wants to Be Lonely,” with guest artists facing the unenviable task of stepping in for his partner on the original track, Christina Aguilera.

But music is far from the only thing that’s had One World Tour attendees buzzing. Apparently, for this latest spectacle, Martin has embraced costume-changes with Cher-like zeal. Among the most talked-about pieces are a sexy leather kilt and an extravagantly fashion-forward white coat. I asked Martin if it is tricky incorporating that many costume changes into one evening. He admits there have been shows when “wardrobe malfunctions were pretty close.” As for the possibility of a hastily-donned piece of clothing leading to an accidental revealing moment (à la Lenny Kravitz), Martin says, “It definitely adds a little extra adrenaline on my end.”

Apparently that adrenaline is spreading to audiences, as well. When Martin and I discuss what he sees when he looks out from the stage each night, he tells me that the image he takes with him is how “the Latin Carnival gets everyone on their feet.” However, when I ask if he does anything special to stay in shape to dance, Martin tells me he doesn’t have, necessarily, any fitness secret beyond showing up and shaking his bon-bon. “The best workout is two hours of performing,” he explains.

It’s worth noting that — despite the fact that majority of his recent releases have been in Spanish — Martin has also released English-language versions of certain tracks. Notable among them is “Adiós”; its excellent video is set in a sexy nightclub and features Martin playing multiple roles, from a martini-shaking bartender to a not-to-be-messed-with doorman. I can’t resist gushing to him about its sexy 1920s speakeasy vibe. “I’m glad you like the video,” Martin says. “It was great playing five different Rickys.”

As for further new material, Martin does not deny rumors that he has been working on an English-language album — possibly one that could be released before the end of 2015. “My team and I are constantly working on new ideas, and if the schedule allows, I will jump in the studio,” he says. He’s quick to point out that he’s already given us a taste of something new and exciting that will almost certainly appear on his next release. “I have released ‘Mr. Put It Down’ featuring Pitbull,” he says — referencing a track released earlier this year that’s a cool mix of Ricky Martin dance energy and Pitbull’s hip-hop flair. But will it be ready for the tour? Martin assures me, “It’s already part of the set list.”

As we go to press, Ricky Martin is set to take his One World Tour across the U.S. and Canada starting September 15, when he plays The Axis at Planet Hollywood in Las Vegas. Major stops along the way will include The Forum in Los Angeles on September 19 and Madison Square Garden in New York City on October 8. As of this writing, the 25-stop tour is set to wrap October 25 at the Amway Center in Orlando.

Since this should get Martin finished up just in time to enjoy the holidays — and this is our “Holiday Entertaining Issue” — I ask him what a happy holiday looks like for him. “Spending time with family is important,” Martin insists. His other essential ingredient: “Percussion instruments!” he tells me — and I can’t help but smile as I picture joyous family gatherings at which Martin teaches his twins the finer points of keeping the beat.

Since music-making is clearly part of Martin’s holiday celebrations, I wonder if he’d ever consider doing a holiday album. “I’ve done holiday songs in the past,” he says. Perhaps the most notable among them is “Ay, Ay, Ay, It’s Christmas!” — a song about forgetting to buy a Christmas gift for one’s sweetheart, which featured a memorably bizarre cameo by none other than Rosie O’Donnell. Nevertheless, Martin insists, “Currently I don’t have any concrete plans for a holiday album.”

Things are getting busy on the set of The Voice Australia, but before Martin gets back to work, I can’t resist asking about a hilarious YouTube video in which his fellow judges on that program (including former Metrosource cover girl Kylie Minogue) offer hilarious impressions of the seductive way he lures contestants to his team. I ask whether making that personal connection is part of his strategy for success on the show. “I’m very passionate,” he explains. “I fight for what I believe in.” It would also seem to be part of his strategy for success in life. “Passion is so important in this industry,” he adds.

Before we wrap things up, I ask Martin if he has any last messages for his fans. He does and — much like so many of his most memorable songs — it contains a call to get everyone up on their feet. “To my fans: Thank you for all your continued support,” he says. “I can’t wait to see you dancing on my tour.”

To learn more about his recent projects and see the full schedule of dates for the One World Tour, visit rickymartin.com

Following the success of his #1 single “Jealous,” Nick Jonas has just dropped his latest single, “Levels.” It’s the debut single off his upcoming...

You Should Watch Cinemax’s “The Knick”

In its first season, Cinemax’s The Knick made a huge cultural splash, and it’s fairly easy to see why. One of the things that is so exciting about Cinemax’s medical drama...