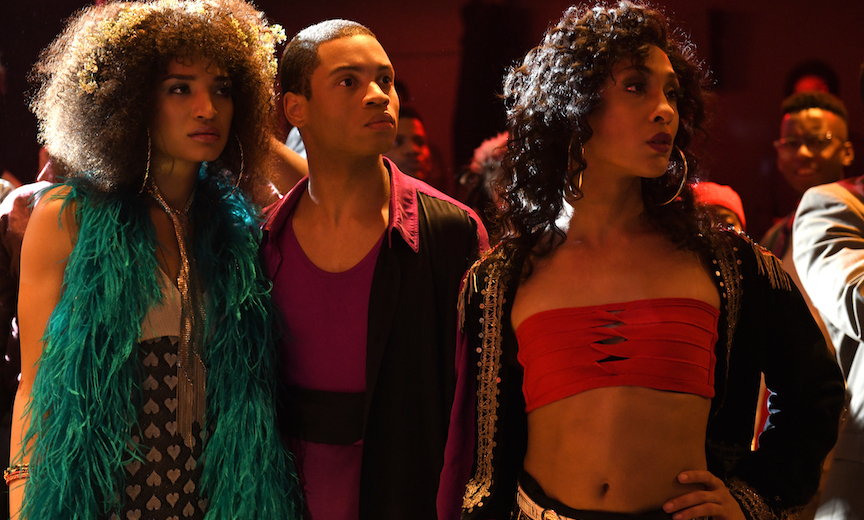 Murphy has so far been tight-lipped about happens next his behind-the-ballroom drama. All anyone’s been permitted to say (“because Ryan has said it”) is that on June 11, the first episode of the second season opens with the release of Madonna’s “Vogue” in 1990.

Now, sitting on the set between takes, Murphy is ready to open up. Not about Pose plot points, of course. But about the nature and the impact of a series that takes its trans leads seriously and treats them with the respect they’re due.

Behind him are just a few of the stunning costumes that have already walked the ballroom runway before his cameras. Yes, they’re eye-popping, jaw-dropping and gobsmackingly gorgeous. But those are just the visuals. His characters are what drive the action; and Murphy’s trans leads are still living their fame fantasies one minute, then confronting poverty, discrimination and AIDS the next.

Everywhere You Turn Is Heartache

Murphy knows instinctively that it’s time to turn up the heat. “This show, more than any other show I’ve ever done, has a beginning, a middle and an end,” he’ll admit. “And I always wanted to show the end right around 1995 to 1996, because that’s the year that the HIV medications came out and worked to stop the plague. I wanted to do a story about a community under siege, and how do you survive and how do you find joy and hope and family when everyone around you is dying?” 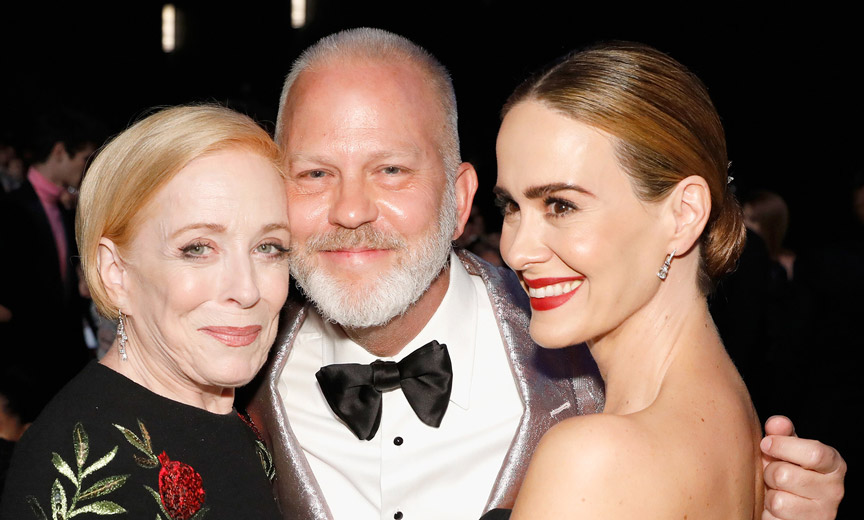 “Vogue” may have been the crowning achievement of Madonna’s first golden era, but for the people living their best lives through ballroom culture? It was considered hope: the possibility of emerging from the shadows; the prospect of real understanding, acceptance and a place at the table of respectability.

“I wanted to sort of move them away from the margins and more towards the center,” he says of his trans cast and crew, “which I’m very interested in doing I guess now in all my work. Because I always feel like I was a marginalized person and now suddenly I feel like I’m in the center. So I was like, ‘How did I get there?’ And how I got there was the stuff that I did worked; it made money. That’s it. So I was interested. I look at Steven (Pose co-creator Steven Canals), who was so excited and desperate to be at the table. And I said, ‘I can do that, and I can do that for this whole group and make them be seen and also treated well and with equality.'”


While the code of silence hasn’t yielded much about what happens in the various houses of the ballroom competitors, Murphy’s recollections of his own youth do provide a telling roadmap. That his show tilts back and forth between ballroom glory and a community ravaged by AIDS often makes Pose feel like every moment is a cliffhanger. How do people grow an artistic community while the people they love are dropping dead all around them?

The Pain of Life That You Know

“At that point in 1988, ’89, 90, I was really just coming of age. And I remember each time I would go to get an HIV test, I would just say, ‘God, if I can just live — I’ll do whatever it takes.’ I would make this bargain that every time I would go that was negative I would do another year of service at an HIV anonymous call center where people would call in. So I did that for a long time. And I would take the calls of people who were going to commit suicide, or they were being shunned, or they were afraid of telling their parents. It was very dark and it was very upsetting. I guess I’ve been reliving that experience.”

I remember the idea and the culture of that time. The late ‘80s, people were just shocked. And in the early ‘90s, I was involved in some protest groups, and I remember people getting really really mad and that’s when ACT UP started to happen. And I remember that feeling of, ‘If we can just hold on, something is gonna happen.’ When it took six years until those anti-viral drugs happened and I remember all the devastation and all of that sadness and all of that loss.

“It happens in every generation,” Murphy says, “and we talk about that in the show. Like in the ‘70s I remember when disco became mainstream. African-American music and gay culture and gay fashion are suddenly on the cover of TIME and Newsweek. And you think, ‘Oh, I’m being seen and I’ve made it and I’m with people. And it lasted for two and a half years. Then all of the disco records got burned at baseball games with the white angry straight boys mad that a spotlight had been shown on people other than them. And it went away. I remember going to ball games with my father and the disco records being burned and feeling, like Oooh. I was never in the closet.”

What Are You Lookin’ At?

He saw that history repeating itself when “Vogue” took the planet by storm. “It’s the same thing in 1990 where Madonna, the most famous woman in the world does that song. And suddenly they think, ‘this is our moment. We’re gonna be seen and loved, and we’re gonna be invited in, and they do. But just as quickly the song fades from the charts. New Kids on the Block are the new thing, and they’re like, ‘what happened?’ And that is a very topical thing to talk about today. I remember that in the Obama presidency when we thought everything is changed. We’re in, and it’s great and we’re seen … and suddenly you’re like. ‘What happened? Where did our access and our respect go?’ And I liked writing about that. It is a remarkable thing to talk about in a hopeful, joyful way — because it is entertainment at the end of the day.”

While Pose is not meant to be a history lesson, Murphy is intent that his drama accurately portray the times and document what actually happened. He’s telling the stories of people who aren’t here to tell it themselves. He’s telling it to a generation who grew up not knowing their gay forbearers. And he’s filling the void left by a mainstream media either oblivious or indifferent to the suffering he witnessed firsthand.

“When I was making The Normal Heart, which was a passion project for me, I was watching the Twitter feed the night that it aired. There were all these young people saying, ‘I had no idea this happened.’ And I was amazed. I was literally amazed. Because young people now are in a much different situation than it was for my generation. There’s PReP drugs, and it’s not a death sentence, in other words. So for me, I was interested in really documenting that time and in that community, because it, with every passing year, faces the possibility of being forgotten. And I want to keep the memory of that alive, because it’s really important to me.”

Not exactly the stuff of feel-good TV. But it’s vital. The tragedy of AIDS juxtaposed against the glitz and glitter of ballroom is the electricity that powers Pose. “I remember the idea and the culture of that time,” Murphy reflects. “The late ‘80s, people were just in shock. And in the early ‘90s, I was involved in some protest groups, and I remember people getting really really mad, and that’s when ACT UP started to happen. And I remember that feeling of, ‘If we can just hold on, something is gonna happen.’ When it took six years until those anti-viral drugs happened and I remember all the devastation and all of that sadness and all of that loss.”

Murphy considers himself “a person of privilege, make no mistake. I was living in Washington D..C. and Miami and then I moved to LA. But I was in it,” he says. “I was involved in that world. So I’m putting a lot of those feelings in. And all the people in my writer’s rooms are too young to have gone through that. I lost a lot of friends, so I’m writing about that and that feeling for me. So it was dark, and it was bleak and it was upsetting, but it was also oddly hopeful. We went out. I didn’t go to the balls, but we had fun; we celebrated and we memorialized and that’s a lot of what this season is dealing with.”

The not-so-secret formula Murphy has taken to the bank through shows like Glee and American Horror Story is to find interesting stories and create memorable characters that everyday Americans somehow find relatable.

“I was always really interested in this topic,” he says of ballroom culture. “I was always obsessed with Paris is Burning. This is the period of time when I was young and in New York in my early 20s. It was the time when I was involved in the AIDS protests in the early 1990s. So I guess I just loved it and I wanted to do it. Not only did I want to do it, but I wanted it to be in a mainstream way. And I feel so often with LGBTQ content, people who make it are just content to be given crumbs, you know? Just feel lucky enough to be at the party or at the table. And I was adamant that if we were gonna do it, it’d have the exact same budget and marketing money as OJ or Feud or Glee. So I guess that was important to me, too.”

Something Better Than You Are Today

No matter what happens now, says Murphy, Pose has made stars of cast members Mj Rodriquez, Indya Moore, Dominique Jackson and Billy Porter. It’s also changed the culture in Hollywood. And he believes that change is permanent.

“What I think this show has done right away, from the casting of it and through Janet Mock and through Our Lady J, is to let them tell their stories. I sort of feel that I’m The Godfather of it. In no way am I the main person. That’s changed, because I don’t think people will go back for that. I don’t think the community would let people do that. I think what’s important is to empower people to tell their own stories, and hopefully get somebody who can help you have the juice to push those through the system, which is what I felt I did. So that seems new to me. It’s exciting to see someone like Janet be suddenly get to be everything she was meant to be and be her own advocate.”