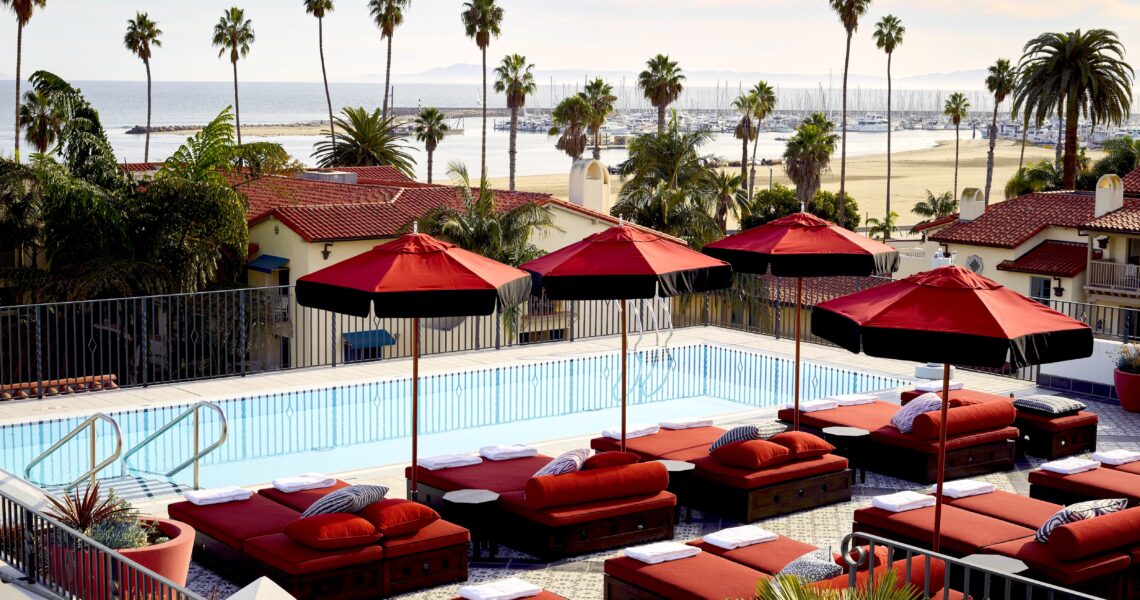 Before Hollywood became Hollywood, there was Santa Barbara. Home to the world’s largest film studio during the silent film era, the Pacific Coast city became known as “the American Riviera” for its temperate Mediterranean climate—and its appeal to film stars and directors.

Nestled between the Santa Ynez foothills and the Pacific Ocean, and less than 100 miles from LA, Santa Barbara looks the part; you can’t ignore its dramatic coastal beauty as you fly in from wherever. It’s a town ready for its close-up, the sort of place that begs for gimlet-eyed commentary by Eve Babitz while sipping a full-bodied California blend from one of the county’s 200 wineries. Wine is to Santa Barbara what tequila was to Babitz.

Fortunately, I was reading Babitz’s Slow Days, Fast Company as we hit the tarmac and disembarked into one of those picture-perfect California days that momentarily stuns those of us from the East. In a complement to Santa Barbara’s weather, often touted as the nation’s best, the entire city initially appears to be a film set on the backlot of Paramount Studios: an amalgam of Spanish Colonial Revival, with a smattering of Mediterranean Revival and Mission Revival. Seated in the back of a black Cadillac Escalade, it’s easy to feel as if the cameras are ready to roll as you pull up in front of Hotel Californian, one of those block-long exemplars of Spanish Colonial Revival architecture.

Originally built in 1925, Hotel Californian had the misfortune of opening one week before the historic earthquake of 1925 (6.8 on the Richter scale) which destroyed much of the city center. But unlike its equally majestic neighbor the Arlington Hotel (now home to the Arlington Theatre), Hotel Californian rose from the rubble like a phoenix to become an icon of downtown Santa Barbara. A sort of stepsister to LA’s Chateau Marmont, the hotel was home to Rocky Galenti’s, a live music dive beloved by locals for its Whisky a Go Go vibe.

Following a multi-million dollar transformation in 2018, Hotel Californian reopened as a five-star luxury property situated at the entrance to the city’s bougie-bohemian Funk Zone. The waterfront neighborhood is notable for its restaurants, art galleries, cafés, surf shops—and a large segment of Santa Barbara’s renowned Urban Wine Trail. Comprised of five neighborhoods, the Urban Wine Trail is a self-guided tour of more than 30 tasting rooms, many of which are adjacent to the beach, and more than a few of which are focused on female wine producers. Bear in mind, the Santa Ynez Valley is where the protagonists of the film Sideways went off in search of the perfect pinot noir. 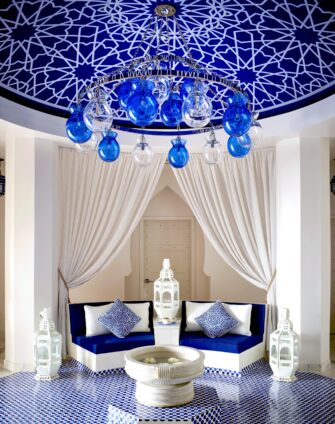 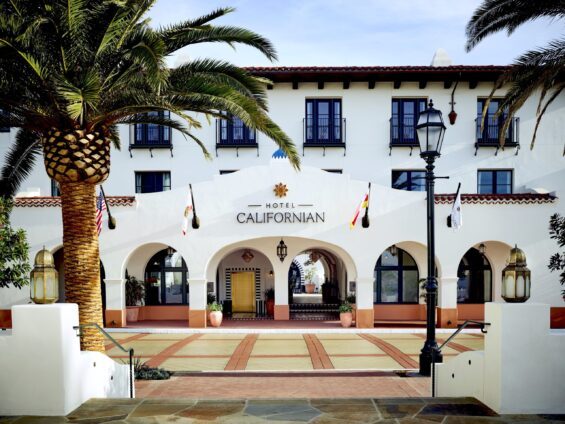 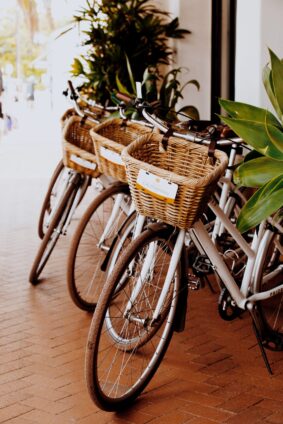 For those seeking to follow in the footsteps of Miles and Jack, consider a day trip into the Santa Rita Hills for a visit to Foley Estates followed by a tasting at Firestone Vineyard. Established in 1972 as the first estate vineyard in Santa Barbara County, Firestone has become a 325-acre sustainable winery, as notable for their Bordeaux and Rhone Valley blends as for its barrel room cameo in Sideways. After an afternoon of tasting flights, it’s easy to understand why Wine Enthusiast designated Santa Barbara as 2021’s Wine Region of the Year. Caveat emptor, in vino veritas.

Fortunately, Hotel Californian has its own grand cru tasting room on property known as The Society: State & Mason. Oenophiles and connoisseurs converge on the corner of State Street and Mason Avenue for tasting experiences paired with culinary treats from Executive Chef Travis Watson who helms the kitchen at Blackbird.

In a nod to Santa Barbara’s cinematic history, Blackbird pays homage to Alfred Hitchcock with an avian-themed black-and-red dining room dotted with blackbird imagery. Unlike the cast in Hitchcock’s The Birds, however, patrons are gently seduced, especially by the room’s supper club vibe and Watson’s coastal California cuisine. The Michelin-listed restaurant is one of thirteen Michelin Guide restaurants in Santa Barbara, as is the Spanish-influenced Loquita. Located a few blocks from Hotel Californian, Loquita honors its Spanish provenance with an El Bulli liquid olive served alongside toothsome paella, all beautifully plated on a patio bursting with bougainvillea. The lively restaurant and youthful crowd perfectly captures the laidback vibe that defines Santa Barbara’s Funk Zone.

A nightcap at Djinn and its adjacent Library Bar offers an opportunity to curl up with a signature cocktail while the Funk Zone catwalk parades along the hotel’s lushly landscaped paseo. During a full moon, the Moroccan-themed Djinn hosts its monthly Howl party, complete with lunar cocktails, board games, and a Tarot card reader.

Visitors to Santa Barbara bring in more than $1 billion in revenue at annual events such as Pacific Pride Festival in August where free same-sex weddings are officiated along the waterfront. Equally cinematic is the Santa Barbara International Film Festival in January which attracts more than 50,000 cinephiles to the neighboring Arlington Theatre, while theatre aficionados head to the Ensemble Theatre Company at the New Vic on the corner of State and Chapala.

As for holidays in the Funk Zone, few venues are more flamboyantly fabulous than the local speakeasy on Anacapa Street known as Pearl Social, which completely transforms into a six-week pop-up known as Miracle at the Funk Zone. Following in the footsteps of New York’s renowned cocktail bar Mace, the Christmas-themed pop-up serves Yuletide cocktails amidst a holiday hurricane of kitschy-clever décor—and the result is the most madcap office party of the holiday season. 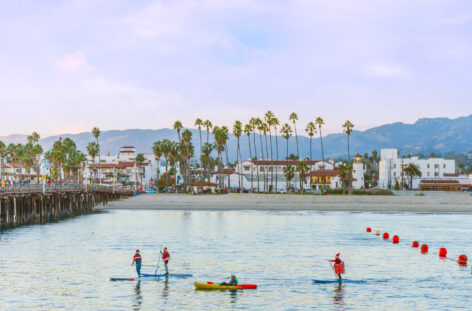 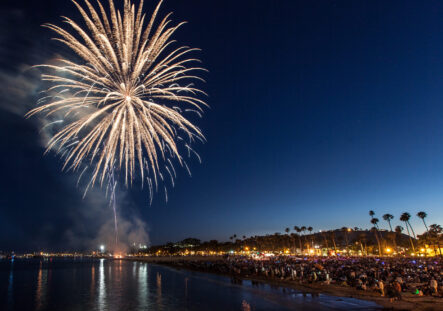 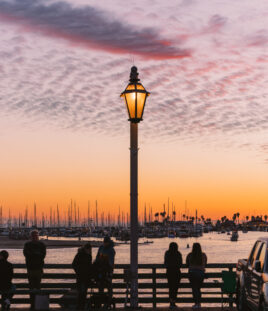 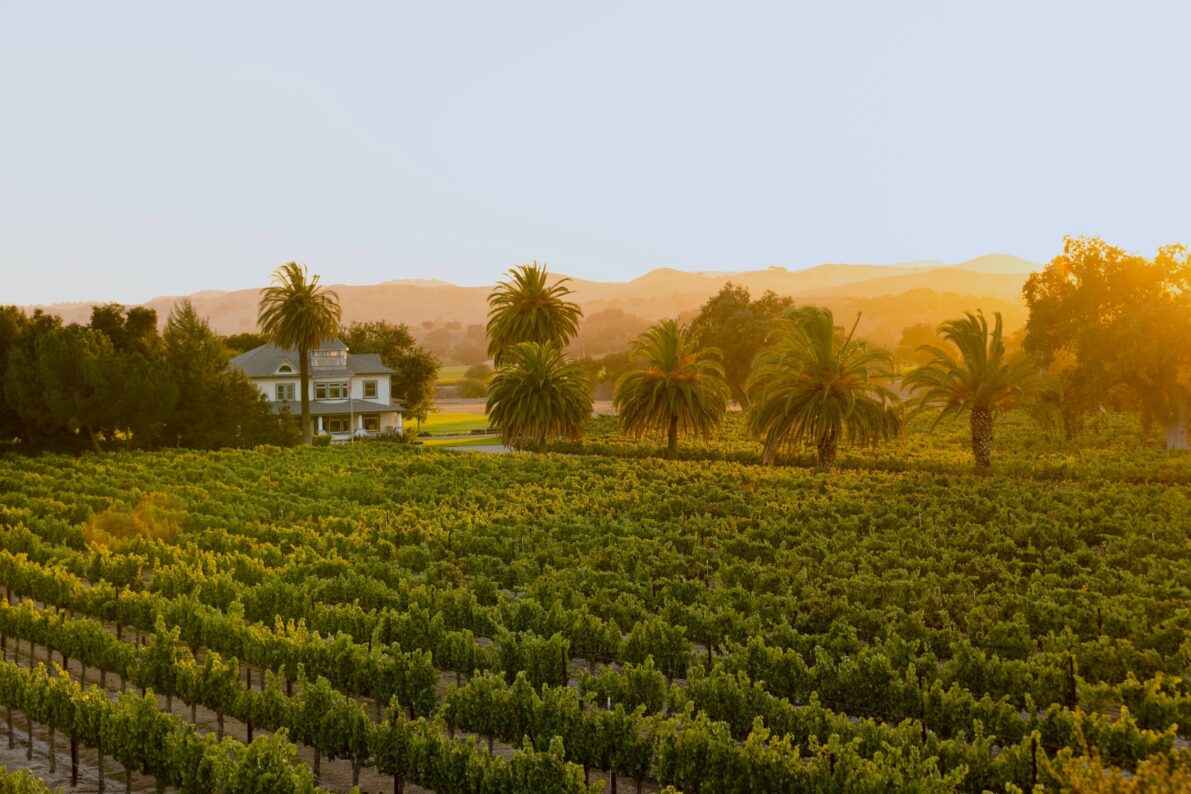 Equally manic and magical are Santa Barbara’s holiday parades, a December tradition that climaxes with an annual maritime Parade of Lights along the Santa Barbara waterfront and a New Year’s Eve Pops Concert at the Granada Theatre.

For years, surfing has been an integral part of Santa Barbara’s outdoor culture, thanks in part to local documentarian Bruce Brown whose Endless Summer films fueled interest in the sport. Founded in 1969 in a factory along the beach, Channel Island Surfboards has worked with numerous local surfing legends including Kelly Slater and Tom Curren, and today, the Funk Zone remains the nexus of surf culture with various surfing outposts.

For those seeking a more mellow form of well-being, Hotel Californian offers custom bicycles, as well as a rooftop pool with panoramic vistas of the Pacific and the surrounding mountains. The hotel’s Majorelle Saturday Sessions group fitness class, led by instructor Victoria Popoff, provides a perfect excuse for a post-workout spa treatment at the hotel’s Majorelle spa. Named for the artist behind Majorelle Garden in Marrakech, the spa is a soothing cerulean oasis of serenity staffed by therapists with thumbs of steel. At which point, you might begin to entertain fantasies of a Santa Barbara life—and which family jewels you need to hock to make it happen.

Early one morning, I stood on the balcony of my room at Hotel Californian. Just to be clear, the hotel’s rooms and suites are designed in full-stop mid-century glam by Martyn Lawrence Bullard (think Cher and Château Gütsch and Million Dollar Decorators), complete with custom cocktail bars stocked with full-size bottles of top-shelf spirits, as well as cocktail shakers and rocks glasses. Hardly anyone was about as the sun began to rise and I called home to the East Coast. Just then, the whistle of the train cut through the morning light and my husband heard it across the wires. “Is that the train?” he asked.

Located just a few blocks from Hotel Californian, the Santa Barbara train station was built in 1902 in the Spanish Mission Revival style. Some days when walking State Street, it’s necessary to stop at the crossing as the train pulls into the station, either the Pacific Surfliner from San Diego to San Luis Obispo or the Coast Starlight which runs between Seattle and LA. Hopefuls still arriving to this day, ready for their close-up.

“Yes, dear, the train,” I responded, ice tinkling in my glass. “Just another day in paradise on the American Riviera.” 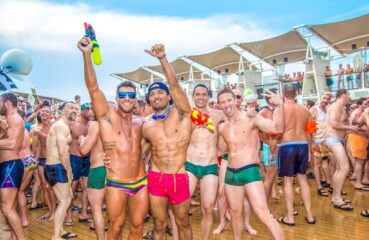 Happy new queer! Now that 2023 has dawned, let’s make the most of it. Leave your inhibitions on dry land and whet your gay appetite with an alluring array of LGBTQ+ cruising...