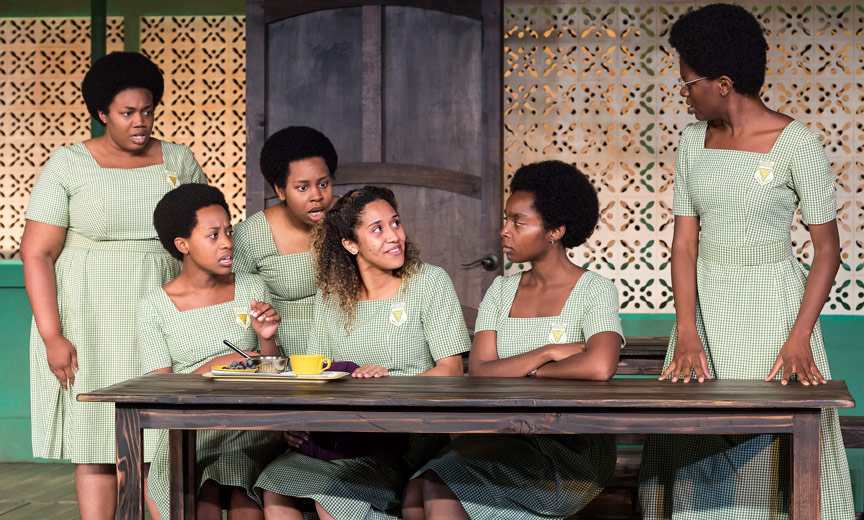 The Center Theater Group (at Los Angeles’ Kirk Douglas Theater) presents this play set in 1986 at a boarding school in Ghana. School Girls, or the African Mean Girls Play (its full title) tells the story of five classmates whose social order is tested by the arrival of a transfer student from America on the eve of a beauty pageant. Paulina Sarpong (masterfully played by Maameyaa Boafo) has the “mean girl” attitude down pat: the judgmental glares, the cutting quips, the haughty arrogance masking her inner turmoil. She is clearly the Queen Bee of her clique – among them her mistreated “best friend” Ama (Latoya Edwards), the eager-to-please Mercy (Mirirai Sithole) and Gifty (Paige Gilbert), and Nana (Abena Mensah-Bonsu) who endures Paulina’s ridicule – desperate to be accepted even if it means being openly chastised and ridiculed for not being “fit and thin” like the others. The rapport among the all-female cast makes it clear why they won the Drama Desk Award for Best Ensemble when the play made its off-Broadway debut last year. Headmistress Francis (Myra Lucretia Taylor) lends gravitas to the levity in her midst as she presides over her charges with a stern but maternal discipline.

Paulina is anxiously anticipating the Miss Ghana Pageant, which she’s been preparing for and naturally assumes she is a shoo-in to win. But Paulina’s plans are threatened by the arrival of a transfer student from America, a light-skinned rich girl of African descent named Ericka Boafo (Joanna A. Jones). Ericka is everything Paulina is not: well-mannered, polite, friendly, accepting. Paulina is irked to see that her clique is taken with Ericka, and grows increasingly so when she learns that Ericka will also be vying for the Miss Ghana crown.

But Paulina isn’t taking any chances and enlists Nana’s help to steal Ericka’s personal file from the Headmistress’s office. Nana is reluctant to jeopardize her academic future, but she ultimately goes along with Paulina’s scheme, in the hopes of earning acceptance. Paulina is taken off guard when the pageant recruiter, Eloise Amponsah (Zenzi Williams) arrives a day ahead of schedule. It turns out that Headmistress Francis and Eloise were once classmates, who -much like Paulina and her friends – were on opposite ends of the popularity spectrum. Eloise was crowned Miss Ghana 1966 and though it’s been 20 years, she relishes the chance to remind everyone of that fact and still retains an imperious air about her. Eloise acknowledges upfront that she has a vested financial interest in choosing a girl who can go the distance and secure a place as a finalist in the Miss Global Universe pageant. 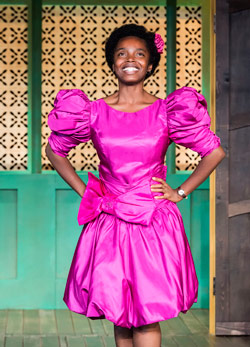 Paulina has a chance encounter with Eloise before the official competition and does her utmost to win over Eloise. It’s almost comical (were it not so pathetic) to watch Paulina’s hard-edged confidence melt into obsequious goo, but the audience is acutely aware that it’s all an act. Eloise already has her sights set on Ericka whose natural charms radiate from within. The absurdity of the competition is brought into greater relief as the girls take turns singing that overworked anthem, Whitney Houston’s “The Greatest Love of All” – a fun send-up of pageants overall. And, despite Paulina’s bravado and preening, it’s Ericka’s impressive vocals that stand out.

Paulina explodes in a rage when Ericka is chosen over her to represent Ghana. Mining what she discovered in Ericka’s confidential file, Paulina exposes the truth about Ericka’s heritage – that she is not from Ghana – which should technically disqualify her from the competition. But in a surprising turn, Headmistress Francis cedes her moral high ground and goes along with Eloise’s decision to conceal the truth from the pageant committee and crown Ericka Miss Ghana.

To her credit, playwright Jocelyn Bioh doesn’t tie this parable up with a neat bow. Decisions are made, corners are cut, and rules are broken for the promise of glory. Paulina gets her comeuppance as each girl gets a chance to confront her, but the verdict is mixed on whether the experience will have a lasting effect on her. Bioh sets up an effective morality play, while still leaving the audience with unanswered questions about human nature and why people behave the way they do. School Girls provides a great showcase for this talented ensemble as well as a thought-provoking parable for our times: when our political narrative places greed and status above honor and integrity and when alliances all-too-quickly devolve to treachery and vitriol.

School Girls is playing now through September 30th at the Kirk Douglas Theater in Culver City before its return to the New York in October. Find more great theater in our robust events calendar. 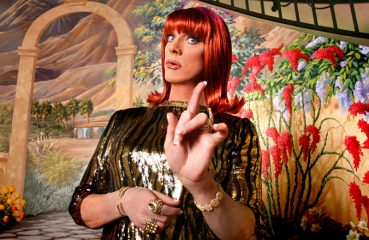 Drag entertainer and monologist extraordinaire Coco Peru talks about her writing process, Lady Bunny, and whether the torch she carries for Trick still burns. Before there was... 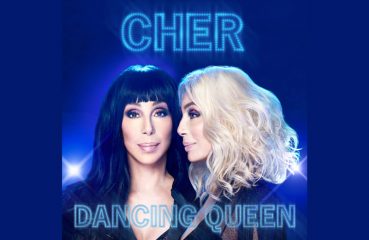 Thanks for Entering to Win Cher’s “Dancing Queen”

Thanks to all the dancing queens! We gave away all the copies to Cher’s latest album, DANCING QUEEN!  Thanks for entering! DANCING QUEEN features Cher singing your favorite...