The Fine Art of the Automobile

How do you make a car a piece of art? Start by putting it in a museum.

When New York’s Museum of Modern Art hosted its 8 Automobiles exhibition in 1951, the idea of a museum showing a car (in the way it would show a piece of art) was so radical that MoMA put out a three-page release to explain why they were doing it. These cars had been, the curators insisted, “selected for their excellence as works of art and for their relevance to contemporary problems of passenger car design.”

Thinking of cars as art is not such a radical idea anymore.Five decades later, MoMA followed up 8 Automobiles with AUTObodies: Speed, Sport, Transport. And even more recently, Atlanta’s High Museum has been a leader in the movement to acknowledge cars for their artistic value with 2010’s Allure of the Automobile and last year’s Dream Cars.

“Design is everywhere, but a car is personal — an ever-expanding notion of what design is,” says Sara Schleuning, Curator at the High Museum of Art. “These are cars that changed the world.” Schleuning’s favorite is an egg-shaped vehicle, appropriately called L’Oeuf. “It has an incredible story — designed by artist Paul Arzens during the Nazi occupation of Paris and was a precursor to the French mini-car movement.” Indeed, L’Oeuf helped inspire the now-ubiquitous smart cars.

Meanwhile, the Indianapolis Museum of Art is hosting its own Dream Cars exhibit May 3 to August 23, 2015. Automotive historian Ken Gross helped advise the exhibition organizers. “They’re helping people to see cars differently: as kinetic art. … Every one represents somebody’s imagination of what the future would be.”

Read Next | The Gayest Oscars Ever? Winners, Presenters Mark an LGBTQ Milestone

Like more-traditional art forms, beautifully designed automobiles can evoke emotions. I’ve seen the 1951 GM Le Sabre that’s part of Dream Cars in several different venues, and it always gets me misty. There’s just something about the curve of the hood, the gently-sweeping tail fins, the mint green metallic paint and the wraparound windshield. Another beauty is the 1947 Norman Timbs Special (pictured) with its flowing, wheel-hugging form and elegant chrome bumpers.

Appreciating auto design as art also highlights how incorporating new materials has resulted in innovation. For example, the 1935 Bugatti Type 57S was fabricated from a magnesium/aluminum alloy in order for it to be extremely lightweight, but the material proved difficult to weld. So designers improvised a solution — giving it a distinctive, riveted spine that would become its trademark.

But you don’t necessarily have to wait for a special exhibition to see cars as art. Many art museums include autos in their permanent collections. MoMA alone boasts a Jaguar E-Type, a Pinin Farina Cisitalia, a VW Beetle, and a smart car. 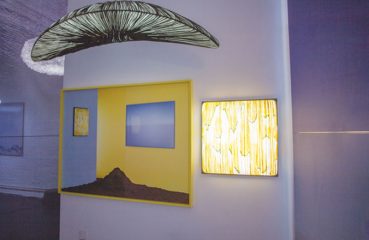