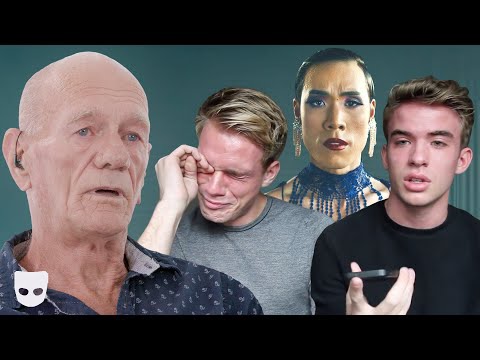 In years gone by, coming out of the closet was akin to crash-landing on an alien planet and being told to “just fit in.” Sure, you might vaguely resemble the organisms around you, but you just feel different.

Nowadays, declaring your LBGTQ’ness is more widely accepted. Heck, we even have a National Coming Out Day to celebrate all the fabulosity of our community. In honor of this year’s NCOD, Grindr released a video to bridge the generational divide and remind us that love is love and empowerment is ageless.

In the piece, a quartet of “Old Gays” react as they watch coming out videos featuring young men, the first of which is Teen Wolf and Arrow star Colton Haynes.

1st getaway since March…damn I needed this

The banter is a mix of playful and pensive. One of the mature men refers to YouTube as “Tubey” while another praises Haynes for “feeling his freedom.” The African American member of the group, Jessay, identifies the added difficulties of being both queer and black. “You’d think that minorities would understand and be more caring, but it’s just the opposite.”

The foursome perks up when Jason Collins appears on the screen. One man blurts, “Oh, I know him” as his buddy coos, “I’d like to!”

What ensues is a dissection of how differently the older generation regards coming out than their youthful counterparts. The golden guys don’t feel compelled to announce their sexual orientation from the rafters on a daily basis, but they are fiercely proud of the paths they blazed to facilitate this brave new reality.

“Each of us, in our own small way, helped make this possible.”

The image on the screen fades up the visage of Nikita Dragun, who tearfully defines her identity as transgender. Without missing a beat, one of our titular Old Gays responds, “And pretty, too.”

The moment is as sweet as it is surprising. We are conditioned to assume that elder individuals may dismiss or deride the transgender movement, but these men immediately embrace Ms. Dragun. The cadre of Old Gays praise Nikita’s self expression with a hearty “You go, gurl!”

As the narrative evolves, we witness Aaron and Austin Rhodes revealing their orientation to their father. The touching moment is especially poignant for one of our Old Gays, Robert, who regrets never having “the talk” with his dad.

just posted a video sharing our #ShouldersOfGreatness story – @rhodesaustin and i have had a lot of weight on our shoulders the past couple months and it feels good to finally overcome some of the struggles of working together as The Rhodes Bros and exploring ourselves as individuals. thank you @HeadShoulders and @GusKenworthy for inspiring us to share our story. link in bio! #PyeongChang18 #HeadShouldersPartner

Robert receives some advice from Jessay, who reminisces about coming out to his deceased father at the funeral. Jessay then admits, “I knew that if I said it when he was alive, I would probably be dead.”

The other Old Gays chuckle nervously at Jessay’s confession, but the emotion is palpable. As the video wraps up, the cuddly/curmudgeonly crew characterize coming out as a “form of liberation” and a way to ensure that future rights can’t be denied, no matter how traumatic the past may be.

“This is who I am,” asserts Jessay. “If you have a problem with it, it’s your problem, not mine.” You go, guy! 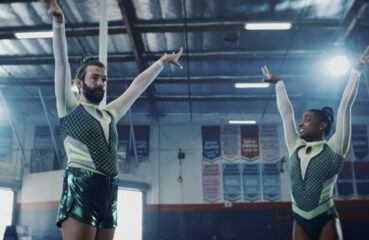 Let’s all join in a hearty chorus of WTF, Karen?!? One Million Monsters – oops, we mean “Moms” are at it again, protesting Uber Eats because they have the nerve to be... 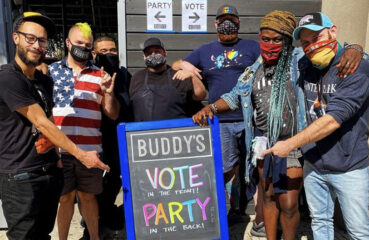 Gay Bars Serve Up Democracy with a Side of Naughty

Let’s not mince words: the year 2020 can cram it with hot sauce. We are SO over the pandemic and the bitter politics that have divided us during these past several months....