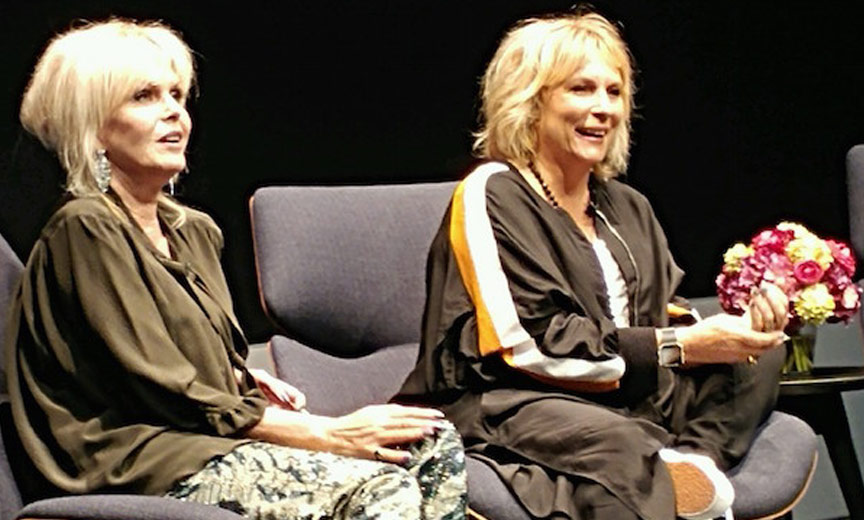 Last night in Manhattan, we had an audience with queens of comedy Jennifer Saunders and Joanna Lumley. It was lovely, sweetie darling.

On Wednesday July 20, as part of their whirlwind tour promoting the U.S. launch of Absolutely Fabulous: The Movie, Jennifer Saunders and Joanna Lumley stopped in to speak to OUT@Time Inc., an organization for the LGBT employees of Time, Inc. and their partners, families and friends. The comedy icons were dressed very much in the spirit of their characters, with Lumley looking particularly glam in a sparkling pant by Jean-Paul Gaultier, and they answered questions for over an hour — also showing a few clips from the movie, which debuts Friday July 22.

Lumley revealed that they had actually been plotting the idea of doing an AbFab movie since 1995 while they were filming the AbFab television series’ famous episode set in Morocco. According to Lumley, the pair settled in with a bottle of whiskey to create the script for an AbFab cinematic masterpiece, which seemed quite brilliant to them at the time. In the morning light, sadly, they discovered it was rather a mess.

Two decades later Absolutely Fabulous: The Movie is a reality, and at the event both Saunders and Lumley had high praise for their co-stars. Saunders mentioned that she’d wanted June Whitfield to play Edina’s mother from the very beginning, and she appreciated how Whitfield’s own television legacy helped reinforce the show’s exploration of the differences between women from generation to generation. Lumley gave kudos to Kate Moss for agreeing to be in a film in which she is killed (Saunders had written the script without knowing if Moss would be on board) and for gamely allowing herself to be dunked in cold, muddy water without a hint of diva attitude. Meanwhile, both Saunders and Lumley had high praise for Julia Sawalha, who plays Saffy — both for how the actress could remain straight-faced throughout even the most hilarious of scenes and her commitment to keeping the character’s look as unglamorous as possible.

Naturally, the subject of fashion was broached, as well. Saunders spoke of their decision to highlight mainly British designers like Stella McCartney in the film and recalled instructing the house of Vivienne Westwood to adjust Edina’s clothes until they didn’t fit properly (insisting they be sized to produce the usually-dreaded “camel toe”). Lumley noted that the characters of Patsy and Edina seem to always be lurking just beneath their skin, mentioning that she’d often find herself paging through a fashion magazine or see a woman dressed just so on the street and think, “That’d be perfect for Edina!” only to remember that the show was not currently in production.

In an evening full of light-hearted moments and laughter — which even saw Saunders and Lumley gleefully remember the over-the-top old-lady-drag that they wore in one of the series’ flashes forward to the far future, there were also some serious moments. Asked about their thoughts on the recent vitriolic social media response the all-female ghostbusters, Lumley revealed that she had chosen not to carry a mobile phone altogether with Saunders chiming in that she never checks her Twitter notifications because it seemed to her to be the equivalent of walking up to strangers on the street and asking, “Hey! What do you think of me?!” And even as Lumley bemoaned the idea of humanity becoming a mass of zombie creatures addicted to their phones (as if on cue) a cell phone ringer blared from the audience. The pair leapt into action — Saunders pointing an accusing finger toward the offender while Lumley offered an imperious glare — before they both fell back into amused giggles: absolutely hilarious (and fabulous) to the end. 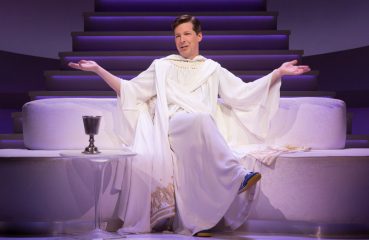 Sean Hayes Puts Jack in the Box Once and For All

Our conversation with Sean Hayes continues. Read part 1. If you missed part one of the interview, you can read it here. Playing God on Broadway is just the latest chapter in Sean...