The Hills Are Alive with the Sounds of Salzburg 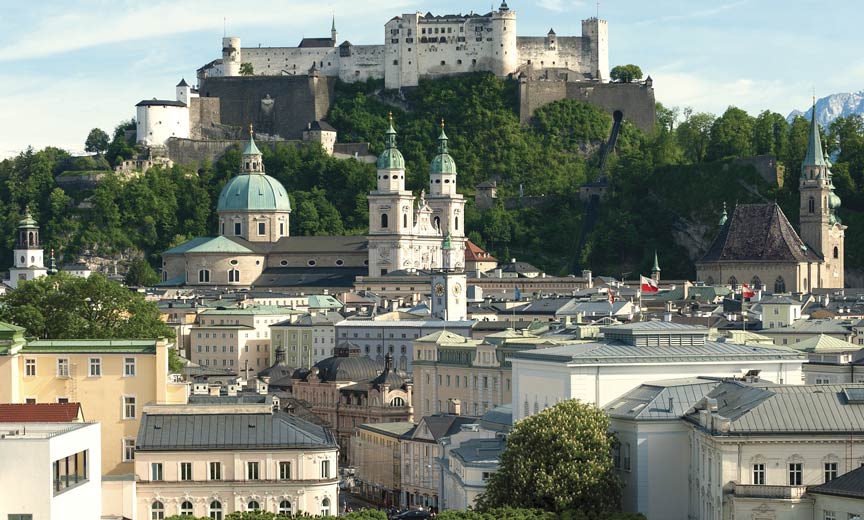 From the story of Maria von Trapp to the work of Wolfgang Amadeus Mozart, the many-faceted charms of this Austrian jewel are crafted with music lovers in mind.

Growing up, I must have watched Julie Andrews go from shoddy nun to SuperNanny in The Sound of Music hundreds of times. The musical life story of Maria von Trapp fed my early love of things theatrical with its music, its dancing and its drama. Setting aside the question of whether I might have been a little young to understand what was going on with the Nazis, it was one of the most magical parts of my childhood.

So when my fiancé proposed a trip that would allow us to relive many of that classic film’s most memorable moments, he definitely had my attention. When I found out the same journey would also allow us to walk in the footsteps of one of history’s greatest composers and dine in a one-of-a-kind restaurant founded by an eccentric billionaire, I was pretty sure Salzburg was about to become one of My Favorite Things.

THE HILLS ARE ALIVE

For starters, when it comes to seeing the Salzburg of Sound of Music, avoid anything involving a bus and book an individual or small group tour (bobstours.com), so you can spend extra time taking Instagram-worthy pictures at the places you love and skip the spots that don’t grab you by the lederhosen. As we got into the van with our guide, she said, “Look — three Marias!” and pointed out a trio of young nuns passing under an arch. It seemed an omen of good things to come. 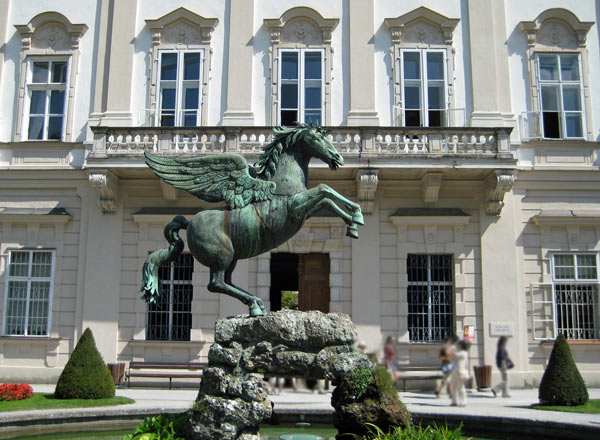 Our first stop was Mirabell Palace (pictured, top of page), where we headed directly for its ornate Baroque Garden. While it’s undoubtedly a horticultural wonder, for us it was all about “Do Re Mi” — the song filmed there when Maria first busts the children out of the mansion to play. Don’t miss the chance to march around the Pegasus Fountain (pictured, above) like a Von Trapp trouper learning to sing or to climb the stairs they ascend along with the music at the end. I recommend snagging a picture holding the top of your head and pointing to the sky just like Julie does when she hits her high note. 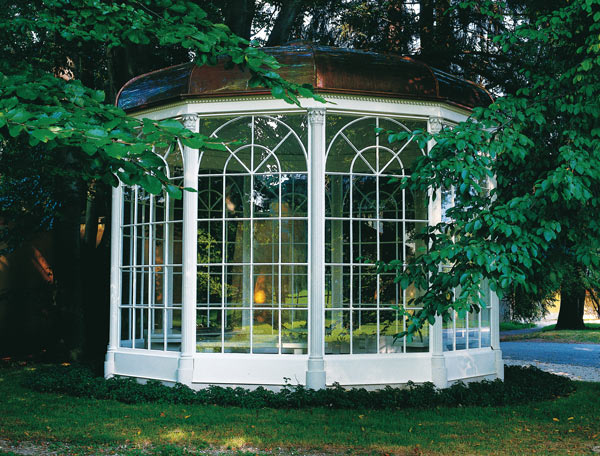 Then it was off to the Von Trapp Mansion — or, more specifically, the multiple locations that came together to give the illusion of one fabulous home. Leopoldskron Palace is instantly recognizeable as the Von Trapp’s back patio, where the Baronness plots while sipping lemonade. The film’s famous gazebo (pictured) was once located here, as well, but to accomodate visitors, it was moved to Hellbrunn Palace. Not only can you do your best impression of “Sixteen Going on Seventeen” there, but you’ll also recognize its yellow walls from early in the film where Maria skips down the road singing “I Have Confidence in Sunshine.”

Closer to the center of the town, we stopped at the Felsenreitschule, (salzburgerfestspiele.at). It’s a truly spectacular concert venue that still hosts huge music festivals. Sound of Music fans will get chills looking up at the famous arch-surrounded stage, where the Von Trapp Family Singers perform their final concert before escaping the Nazis. 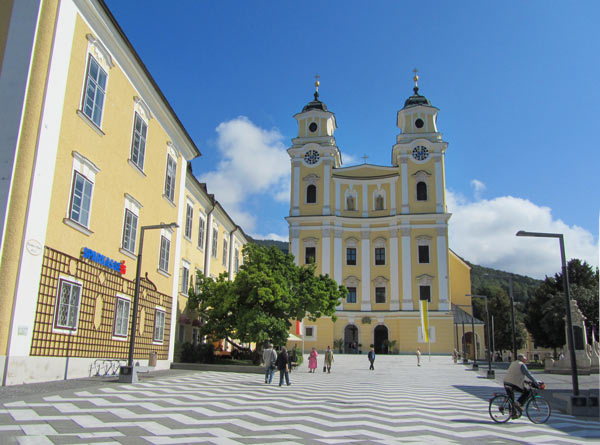 Next, we headed farther out past the towers of Maria’s convent, Nonnberg Abbey, around the mountains of the film’s majestic opening and over the rolling hills where Julie did her famous spinning. Our ultimate destination was the Basilica St. Michael (pictured, above) in Mondsee — site of the wedding of Maria and Captain von Trapp. Its grandeur is instantly recognizable, but if it seems slightly different from the movie, there’s a reason. Through filmmaking magic, they made the cathedral appear twice as long — giving Julie double the time to work that massive train.

Across the church square, we noticed a shop with a sign bearing a single word: “Edelweiss.” Its proprietor was eager to tell us about the history of the starburst-shaped white flower. Long before it became a Sound of Music song lyric, it was the ultimate love token. Because the flower only grows above a certain altitude, would-be-grooms would climb every mountain until they found a sprig to offer as a marriage proposal. Tourists can conveniently buy the flowers here, already pressed and dried. I went home with a music box with an actual edelweiss flower embedded in its top that also plays the “Edelweiss” melody — and snagged one for my Sound of Music loving mom, as well.

From a memorable musical of the 20th century, we leapt back further in time to the greatest music of the 18th century. Though Wolfgang Amadeus Mozart would ultimately move on to Vienna, he began his life and career in Salzburg, and there may be no more exciting a place to experience both his music and the story of his tragically short life.

As Mozart is Salzburg’s favorite son, you’ll have your choice of venues where you can experience works by the Maestro. We started our journey with one of his most beloved operas, The Magic Flute, at the beautiful Salzburg State Theatre. Construction on this jewel box of a venue began shortly before Mozart’s death, and it has hosted some of his most revered work over the years. The space — with its intricately made chandeliers and spectacular painted ceiling — feels filled with history. 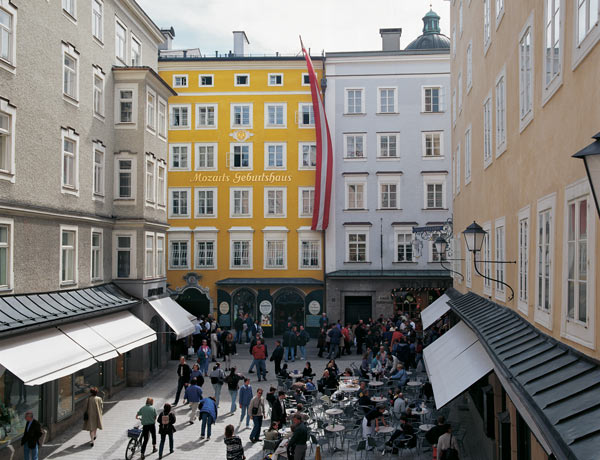 Speaking of history, it’s hard to put into words the sensation of visiting Mozart’s Birthplace (pictured), where he spent the earliest years of his life) and the Mozart Residence, where the family moved when the composer was about 17. They are shrines to all things Mozart — equipped with delightful modern touches like codes you can scan with your smartphone to hear details of Mozart’s story along with samples of his music. They drive home how young he was when he began to compose — five; the immense speed at which he wrote — over 600 pieces in three decades; and the regrettably young age at which he passed — just 35. Though both the Birthplace and Residence possess a wealth of treasures — from sheet music to models for opera sets — for me, it was the instruments that imparted the greatest sense of wonder. Knowing Mozart’s fingers pressed the strings of this very violin (pictured, below) or first figured out famous overtures on the clavichord in front of you is like seeing the beginning of music that ended up echoing for centuries. 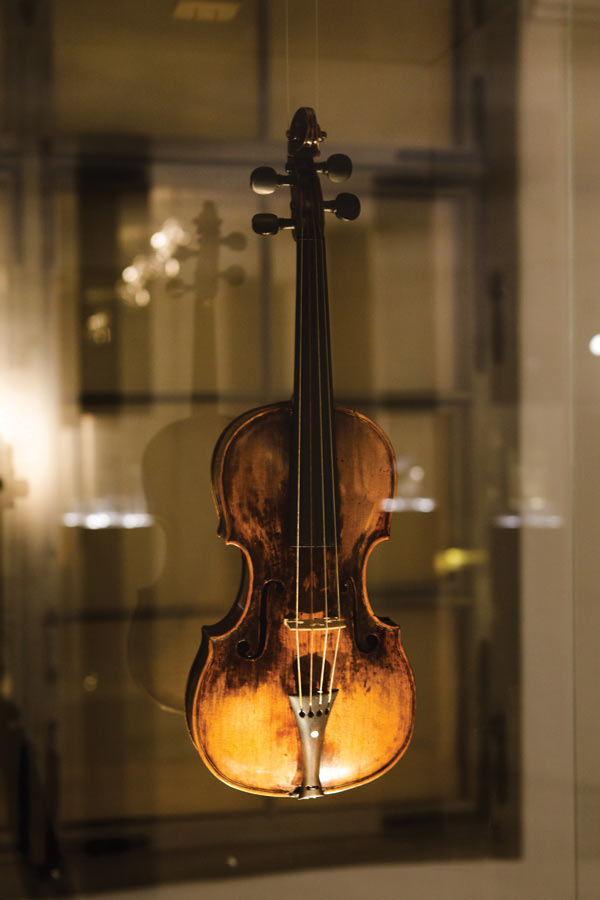 Our final Mozart-specific event was a splendid visit to St. Peter’s Stiftskeller (stpeter-stiftskeller.at/en). It bills itself as the oldest restaurant in Europe — dating back to 800 A.D. — and records suggest that its patrons have included both Christopher Columbus and the Holy Roman Emperor Charlemagne. (Don’t worry, though — they’ve kept up with improvements over the centuries.) Nevertheless we were transported back in time by their Mozart Dinner, at which we were entertained as we dined in a stately baroque hall by an ensemble of six musicians and two singers. The music was sublime — particularly the performance of a beautiful and expressive soprano, and being seranaded between courses felt like a whole new kind of glamorous living. 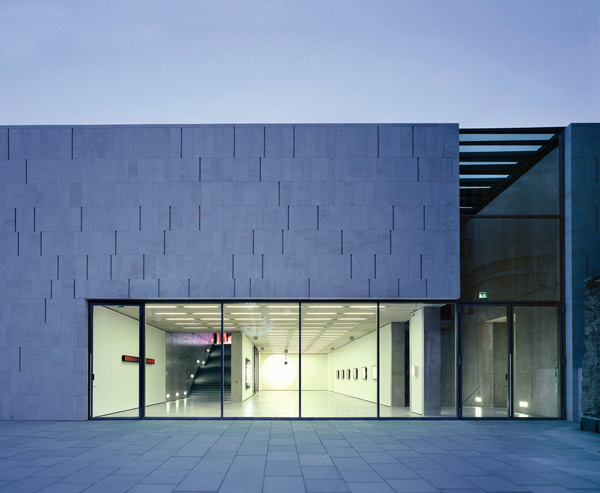 ON TOP OF THE WORLD

From almost anywhere in Salzburg, you can see the Festungsberg — an elevated plateau that hosts both the old — the very explorable Hohensalzburg Castle — and the new — the Salzburg Museum of Modern Art (pictured, above, museumdermoderne.at/en). Of the former, I’ll warn you that people were much shorter in the 1400s, and you need to be very careful walking through certain doorways lest you end up smacking yourself hard on the noggin like I did. And of the latter, I’ll suggest you be careful on the stairs.

But if you’re looking for the ultimate luxury in Salzburg, head back toward the airport to enjoy the passion project of one of the world’s wealthiest men. Dietrich Mateschitz is the Austrian entrepreneur who launched Red Bull, and when you have that kind of money, you can amass some pretty cool toys. In Mateschitz’ case, that means things that go vroom: race cars, airplanes, even jetpacks. Once he collected enough, he needed a place to put them. So Mateschitz bought an entire airport hangar, Hangar 7 (pictured, below hangar-7.com). 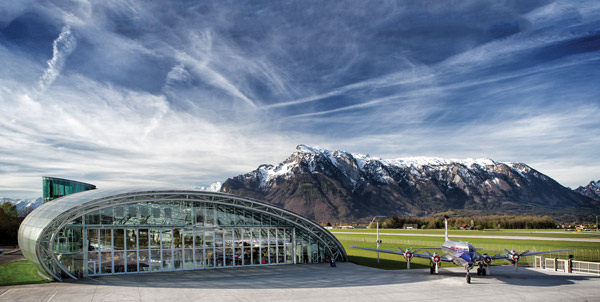 Floating above it all, like its namesake, is a Michelin-starred experiment in fine dining: Ikarus. The restaurant turns over its kitchen to a new chef each month, allowing them to create as they see fit, and we’re talking about the kind of culinary minds showcased on Netflix’s Chef’s Table. (Superstar Daniel Boulud is slated to take a turn in July of 2017.) They can serve anything from classic cuisine to the wild molecular gastronomy — as long as the dishes are extraordinary. When we visited, the guru of the moment was Virgilio Martínez Véliz — a Peruvian who revolutionized Lima’s dining scene. We were wowed by the flavors and textures, from violet corn puree to flash frozen blood orange.

The service shined with equal luster: with each course delivered by a phalanx of servers and plates revealed in tandem with a dramatic flourish. Between courses, our charming sommelier conspiritorially confided which flavor notes in each dish led him to his inspired choices. I almost couldn’t believe when — after ten decadent courses — they also presented us with a box of perfect petit fours for the road. 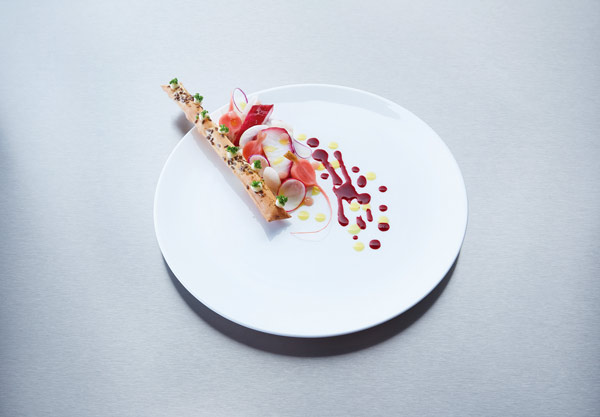 In some ways, Salzburg feels like many lovely European cities — cobblestones, fountains, motorists driving down streets that seem too small to accommodate them. But there’s also a special magic to trekking down the very streets where Maria Von Trapp and Mozart once walked. It gives the place a certain hum — as though at any moment everyone passing by you might break out into song. And ultimately it may be that which truly is the sound of Salzburg.