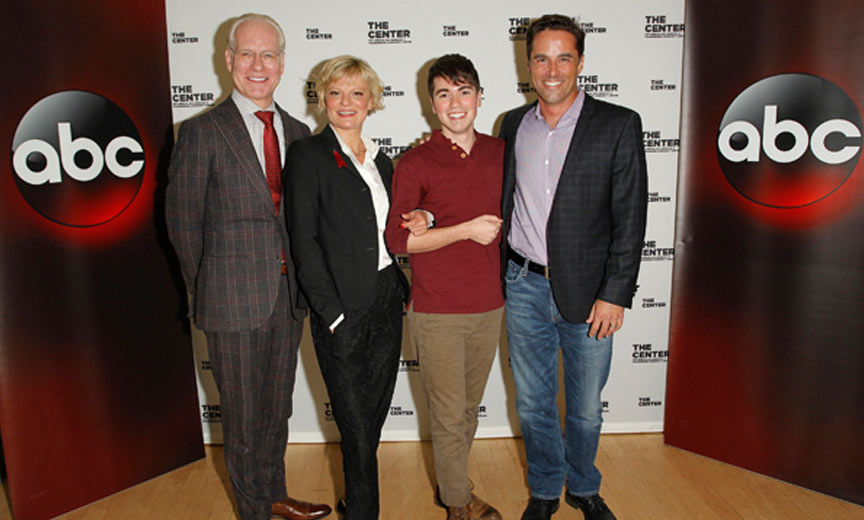 ABC recently sent cast and creators from its buzzy new comedy The Real O’Neals to chat with Tim Gunn before a lively audience at NYC’s LGBT Center.

If you’ve seen advertisements for ABC’s charming new comedy The Real O’Neals, you might not expect it to be overtly controversial. The show follows an Irish Catholic family whose matriarch, Eileen (Martha Plimpton), aims to be a pillar of their church community — a goal undermined by her impending separation from her husband, her oldest son’s eating disorder, her youngest daughter’s criminal leanings, and the fact that her middle son Kenny (Noah Galvin) has recently come out as the first openly gay kid at their Catholic school.

However, even in today’s era of more-progressive LGBT representation on television, the show’s heady cocktail of religion and homosexuality has evoked typically shrill response from far-right-wing organizations such as the Catholic League. This was one of the subjects addressed when NYC’s LGBT Center hosted a screening and panel featuring show co-creator David Windsor and stars Plimpton and Galvin, moderated by Tim Gunn. The episodes screened included the show’s pilot, during which all the family secrets spill out in a spectacularly public setting, and an episode called “The Real F Word,” which takes on that most-famous of gay slurs in a surprisingly enlightened way.

After the audience had giggled, chuckled and guffawed its way through the screening Plimpton, Galvin, Windsor and Gunn took the stage, with Plimpton looking particularly New York chic in a well-tailored black and white ensemble that was a far cry from the mumsy cardigans she sports on the show. Gunn revealed that the reason he was asked to play host is that he appears in an upcoming episode (playing himself) but also that he is also “indefatigably loyal and a fan” of the show.

Talk turned quickly to the so-called “outcry” from religious groups. Gunn mentioned that the fact that the Catholic League had come out against the show should be seen as “a mark of pride.” Windsor agreed, mentioning that he intended to hold on to a copy of the full-page New York Times ad that the League had taken out to protest the show and “have it framed.” Plimpton pointed out the disingenuousness of certain conservative groups, which are named to sound important but truly just have small memberships represented by very vocal spokespeople. “It’s like a mouse in the kitchen,” she said. “It makes a lot of noise and shits all over everything, but in the end: it’s a just a tiny little thing.”

The panel discussed aspects of The Real O’Neals that drew them to work on it — agreeing that it was their shared goal to help families better handle the coming out process. They also remarked on how close the cast had become — generally staying together to chat and bond between takes when another project might see its actors run for their dressing rooms. This seemed supported by the fact that each time Galvin spoke, Plimpton gazed at him with unabashedly maternal pride. She also suggested that part of their instant bond may have been due to the fact that they had all been child actors. Indeed, “Mom” Plimpton began her acting career at age eight and famously starred in beloved films such as The Goonies as a teen. “Dad” Jay Ferguson (late of Mad Men) starred in the TV series adaptation of The Outsiders at the age of fifteen. “Big Brother” Matt Shivley spent his teen years working on shows including Nickelodeon’s True Jackson, VP, while “Middle Child” Galvin spent much of his youth working on the stage. And even “Little Sister” Shannon is played by Bebe Wood, who — in her (even) younger years — played the precocious tyke Shania on another groundbreaking gay-themed TV series, Ryan Murphy’s The New Normal.

The Q&A portion revealed the crowd to be excited and engaged by what they’d seen of The Real O’Neals thus far. One audience member asked how to help make sure sponsors did not buckle to pressure from hate groups to abandon the show. Plimpton wisely pointed out that the best way is to make sure The Real O’Neals is winning the numbers game — by watching and encouraging others to watch, by discussing the show on social media using hashtags like #LetsGetReal, and reminding those who DVR the program to watch it within three days of its airing so that it counts more significantly toward its ratings.

One audience member asked if Kenny would get a romantic life on the show, recalling how often we’ve seen metaphorically neutered gay characters on TV — even in gay-centric shows such as Will & Grace. David Windsor replied with pride that we would get to see the character date, kiss boys and go to prom. Plimpton promised that the show offered all the experiences of a coming-of-age adolescent — just one that happens to be gay, and declared that she’s “very proud to be associated with writers who feel: Why the heck not?” Another audience member praised the panel for the unusual choice to make the mother character (rather than the father) the one for whom their child’s homosexuality proves the biggest challenge, and Plimpton revealed that this aspect of the story was borrowed from the experiences of writer Dan Savage, on whose upbringing the show is very loosely based.


Several audience members — among them a self-declared gay Catholic priest — received warm rounds of applause from both the panel and the crowd when they shared their own experiences combatting bigotry and small-mindedness and thanked The Real O’Neals for their efforts to do the same. Others in the audience used their Q&A time to encourage the show to take advantage of certain cast members’ special talents, in particular Wood’s spot-on impression of Little Edie from Grey Gardens (previously featured on The New Normal) and Plimpton’s singing voice (as evidenced by her turn in the 2008 Broadway revival of Pal Joey).

Without a doubt, the funniest moment of the Q&A came when Tim Gunn called on an audience member “in the striped shirt” to ask a question. The gentleman raising his hand looked down at his apparel — which was checked not striped — momentarily confused. “I’m sorry, “ Tim Gunn followed up, realizing his mistake. “Is that gingham? My eyes!”

“How DARE you, Tim Gunn?” Noah Galvin retorted with mock incredulity, showing off the comic instincts that make him such a winning star on the show. And as the audience erupted with laughter, they seemed joined by a collective hope that they’d get many more opportunities to laugh with the brave and funny artists who have come together to create this exciting new show.

The Real O’Neals airs Tuesdays at 8:30 pm Eastern on ABC, and you can catch up with it online at abc.go.com. On Twitter, follow The Real O’Neals @TheRealONeals, Noah Gavin @Noahegalvin, Martha Plimpton @marthaplimpton, and David Windsor @dwindsor789.

Marti Gould Cummings dishes about how his “really messy and androgynous” style of drag has evolved, and teases his upcoming gigs....

Darlene Love Finally Gets Her Due

Nearly uncredited, Darlene Love helped create some of the biggest hits of the 1960s, but now that she’s the headliner, everybody is feeling the Love....