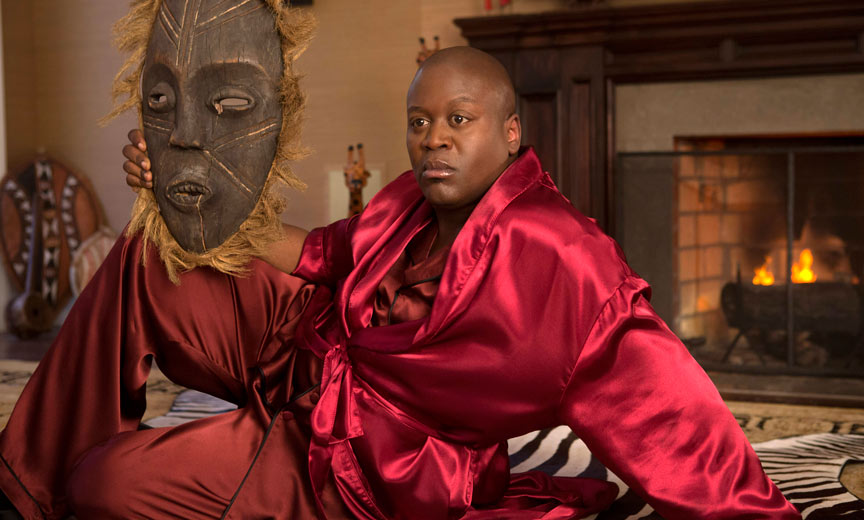 Tituss Burgess is not in character today.

He’s on hiatus from playing loud-and-proud Titus Andromedon, roommate and pal of the title character on the hit Netflix comedy Unbreakable Kimmy Schmidt. At his home in Harlem, the suprisingly soft-spoken actor is opening up to Metrosource about his path to this career-redefining role — which includes memorable turns on 30 Rock, coveted roles on Broadway and leaving home in search of his true potential.

Burgess was born and raised in Athens, GA — a place with a musical pedigree that includes being the birthplace of The B-52’s. “I caught The B-52’s once [at a club] called Boneshakers,” Burgess remembers. “It was the only gay bar in town.”

Though he didn’t do much in terms of coming out, Burgess remembers having “the conversation” with his mom. “She handled it as best she could, and now she’s totally fine with it,” he explains.

Nevertheless, like The B-52’s, Burgess was destined to roam around the world. “I was always going to leave Athens,” he recalls. “Athens never felt like home. It did not feel as open-minded as I felt. I needed somewhere that I could stretch out.”

What Burgess also needed was to go somewhere where they’d be holding auditions. “I certainly knew the type of work I wanted to do, and I would not be able to do in Athens at the level I wanted to do it,” he says. “I was always gonna move to New York.”

Though many arrive in NYC with similar dreams, Burgess’ combination of talent and tenacity led him to roles on Broadway, in productions of Good Vibrations, Jersey Boys, The Little Mermaid and Guys and Dolls. He also explored opportunities beyond, including significant productions of Into the Woods in Miami and The Wiz at California’s La Jolla Playhouse.

Burgess soon found himself fully enmeshed in the community. He even performed the Dreamgirls showstopper “And I Am Telling You I’m Not Going” at the LGBT fund-raiser “Broadway Backwards,” where performers traditionally perform songs written for actors of the opposite gender. But when asked if he’d do the song again, he declined. “It’s too hard. It’s terribly taxing,” he says. “It was certainly an amazing experience, but I don’t need to do it again.” But he hasn’t ruled out returning to the event with different material. “The creators are good friends of mine,” he says. “It is for an amazing cause. My services are always available to them.”

That wasn’t the only time Burgess tackled an iconic musical theater role traditionally played by a woman. Stephen Sondheim himself approved the actor to take on the role of the Witch in his Into the Woods (played by Bernadette Peters on Broadway and Meryl Streep on the big screen). “Stephen Sondheim has more than shaped my musical upbringing and has informed how I approach singing a song,” he says. Burgess even performed one of the Witch’s songs for Sondheim at the icon’s 85th birthday celebration. “It was surreal, and I still can’t believe it happened.”

Burgess still has big theatrical goals — including writing the score for a stage adaptation of a film that starred the late Whitney Houston. “It is in the works, the very early stages,” he teases. “That’s all I can tell you.” But Burgess’ future on the Great White Way will have to make room for his burgeoning career on the small screen.

From Tituss to Titus

Despite having achieved his dream of being a working stage actor, Burgess found himself restless for a new challenge. After finishing work on Guys and Dolls, he spent a period mostly teaching. “I told my then-agent to not send me out on anything unless it was a television job,” he says.

Then came an audition for 30 Rock, where Burgess was cast as hairdresser D’Fwan. “I was very excited,” he remembers. “I was also very scared because I did not have any network TV experience, and 30 Rock was [one of the] hottest shows on TV at the time.”

But when 30 Rock creators Tina Fey and Robert Carlock were conceiving the project that would become Unbreakable Kimmy Schmidt, they had Burgess in mind for a much bigger role — that of perpetually out-of-work and over-the-top actor who would even share Burgess’ first name (with a slightly different spelling): Titus Andromedon.“It’s not every day that you have a comedic legend offer you a role that’s based on some part of your life,” says Burgess. “That’s an honor, and I don’t take it lightly.”

“Working with [Tina Fey] is a wonderful, collaborative experience,” says Burgess. “She is very open, very supportive and creates a space that makes you feel safe to screw up and encouraged to succeed.”

The show is generally considered a media darling, and Burgess dismisses the minor criticism over its boldness in addressing the issue of race. “A lot of people look for something to be upset about,” he says. “Tina Fey and Robert Carlock are some of the smartest writers I’ve ever met, and they are so informed. They have so much to say that they don’t have to rely on stereotypes.”

While fans anxiously await the show’s second season, Tituss Burgess has found at least one additional way to distance himself from his character, who famously shares a basement apartment with Kimmy Schmidt.“I lived in the basement of a duplex,” he says. “I have since kicked everyone out, and I have the whole duplex. It felt amazing.”

He won our hearts in Mean Girls and made TV history playing Eddie Bear on Looking. That show may have seen its last season, but Daniel Franzese’s awareness-raising mission goes...

ABT performs Swan Lake this week, and this is an especially good time to see it....