A List of Gay Bars in New York by Neighborhood

What to Do for WorldPride 2019

For its sixth year, WorldPride comes to the birthplace of the modern LGBT movement: New York City. In 1969, tension between gay men and police erupted in violence at the Stonewall Inn in NYC’s West Village. The “Gay Power” rally and other events that followed culminated in what we now know as the fight for LGBT rights—not only in the United States, but also around the world. An estimated 3 million people are expected to come to New York in June 2019 for WorldPride, or Stonewall50, in honor of the 50th anniversary of the Stonewall Riots. Although many events will celebrate Pride throughout the month of June, WorldPride will begin in earnest with the Garden Party celebration on Monday, June 24. Gay Pride Week will culminate with the biggest Pride March in the world on Sunday, June 30. Read on for Pride events both prior to and during the official WorldPride Week in New York.

At the core of all Pride celebrations is a call to human rights. Engage with the top thinkers leading the charge for equality at the WorldPride Human Rights Conference during Pride Week. Activists, artists, educators, writers, political figures, and many others will speak in seminars, panels, and talks you won’t want to miss. Educate yourself and have fun along the way this June for WorldPride! June 24-25, 2019. Learn more about the Human Rights Conference. 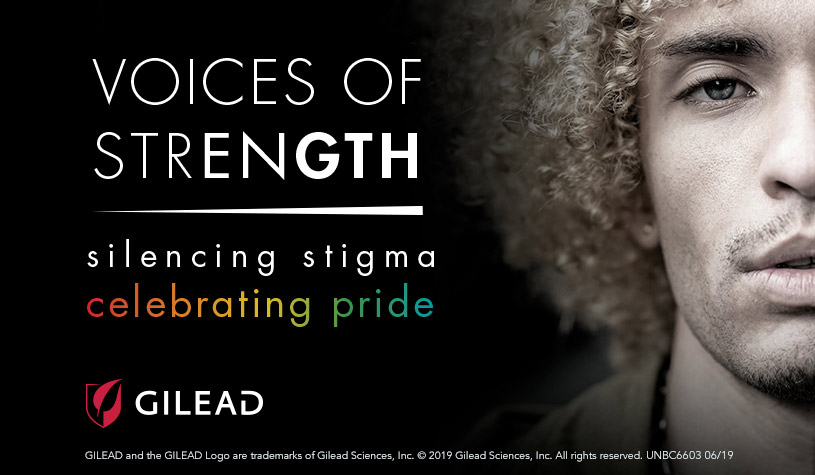 We are strong. But we are stronger when our voices are heard. As we celebrate WorldPride, it’s time we speak up as one and silence the stigma surrounding HIV. Get inspired at: Date: June 25 to July 1, Time: 10AM – 6PM, Location: 34 Little West 12th Street New York, NY Lend Your Voice, Help Silence Stigma

Pride Island is the music festival portion of New York Pride Week, and WorldPride’s version will be better than ever. Located on the banks of the Hudson River near Hell’s Kitchen, this three-day event will be filled with outdoor concerts brimming with pride. Performers have yet to be announced, but previous years have seen stars like Cher, Ariana Grande, Jennifer Lopez, Tegan & Sara, and Whitney Houston. Ticket sales will benefit local NYC nonprofits, which will receive grant money from NYC Pride for their work. Your fun will go to a great cause! Ticket sales begin in January 2019. June 28-30, 2019. Pier 97 at Hudson River Park, Learn more about Pride Island

5PM: gates open for the premiere of our new outdoor spectacular. The 18,000 square foot outdoor festival complex boasts state-of-the-art projections, lighting and a festival-level revolutionary sound system plus spectacular views of the city from the 360º catwalks and VIP areas.

See cooking demonstrations, learn recipes, and—most importantly—eat yummy food at Savor Pride. Now in its second year, this event will be held on a sunlit terrace in SoHo. These are the NYC headquarters of God’s Love We Deliver. God’s Love feeds the hungry around the world, comforting the sick and malnourished with wholesome, quality meals. This special fundraiser will benefit both God’s Love and NYC Pride, the organization throwing WorldPride in 2019. LGBT chefs will be on hand to teach you how to flambe, souffle, and saute at this tasty fundraiser. Friday, June 28, 2019. 166 6th Ave., Learn more about Savor Pride. 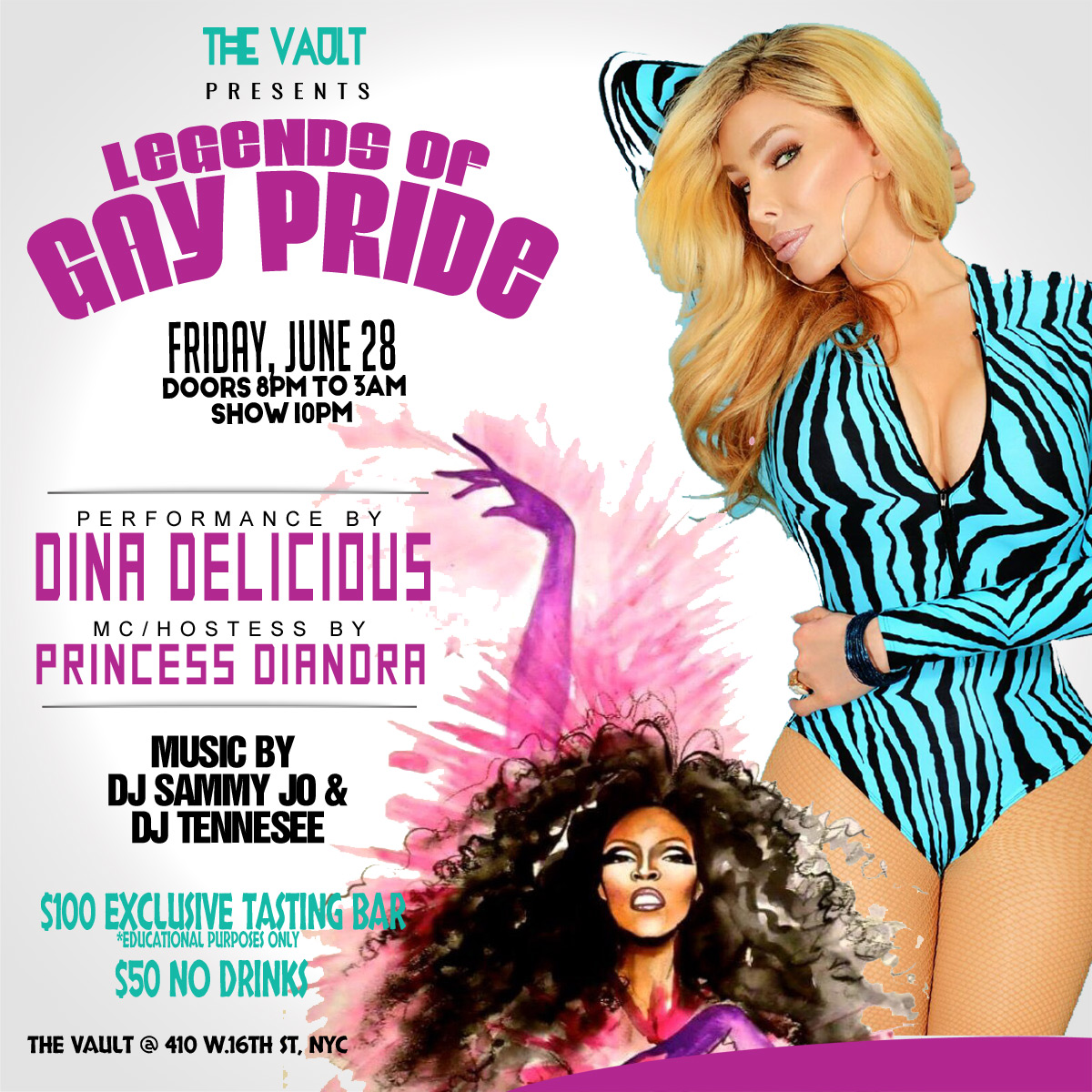 The Vault Presents the Legends of Gay Pride: Dina Delicious

In the spirit of the Gay Power rally after Stonewall in 1969, this show of solid350arity will commemorate that historic uprising of the LGBT community. At that rally, 500 people joined in one voice in Washington Square Park then held a candlelight vigil in Sheridan Square across from the Stonewall Inn. For WorldPride, join demonstrators and speakers in the call for human rights and civil rights. The event is free for all. Friday, June 28, 2019. Learn more about the Commemoration

LGBT teens and allies alike are invited to Youth Pride, an outdoor event during WorldPride week. This youth celebration will feature live performance, interactive experiences, and games. While location and other specifics have yet to be announced, we do know that last year saw a selfie-worthy photo backdrop, live music, and a MAC Cosmetics station where visitors received makeovers and face-painting. Youth Pride is free for all. Saturday, June 29, 2019. Learn more about Youth Pride.

A civil rights demonstration, a celebration, and an invitation for change, the Pride March on June 30, 2019 is set to be the biggest in history. The year after the Stonewall Riots, the first Gay Pride March in 1970 demonstrated the solidarity of the LGBT community in New York, soon to be echoed in other communities throughout the country and the world. Organizers are still accepting applications for community organizations, bands, corporations, activists, and political candidates who will march next year. Get ready for over 100 floats, great music, and a constant party from noon till who knows when! The day of the Pride March, stop by the Learn more about PrideFest street fair for food, performances, and vendors celebrating all things rainbow. Sunday, June 30, 2019. Step off at noon. Learn more about The March.

Shut down the Pride March with a rooftop party for WorldPride! Femme Fatale celebrates all things female, inviting women from around the world to a rooftop (location to-be-announced) where they’ll meet, dance, and keep the party going strong. Stay tuned for more details. Sunday, June 30, 2019. Learn more about Femme Fatale

Europe’s biggest party brand, Matinee, joins forces with Masterbeat for an incredible WorldPride Closing Party with their down and dirty production of Matinee: Pervert at Manhattan’s last remaining mega-club, Terminal 5. Join over 3000 guys from around the world as we get a little perverted at one of the world’s most infamous dance parties, taking over all the levels of Terminal 5 for a raucous night of dancing and debauchery. Learn more about Matinee Pervert: Oneworld Closing

NYC Pride is thrilled to bring back our Cosplay event, in partnership with the creators of FlameCon, the LGBTQIA+ nonprofit Geeks OUT. New York City’s premiere glamorous singing drag queen, Petra Fried will host this year’s CosPlay & Pride on 6/22 at Pier 40! Learn more about Cosplay & Pride 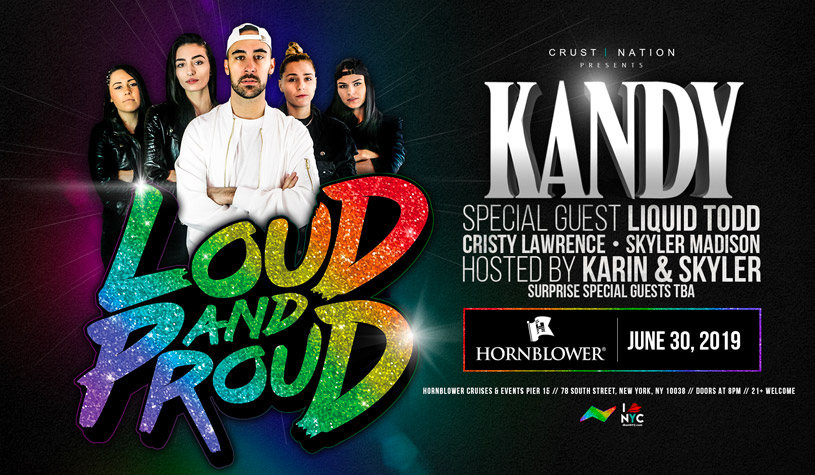