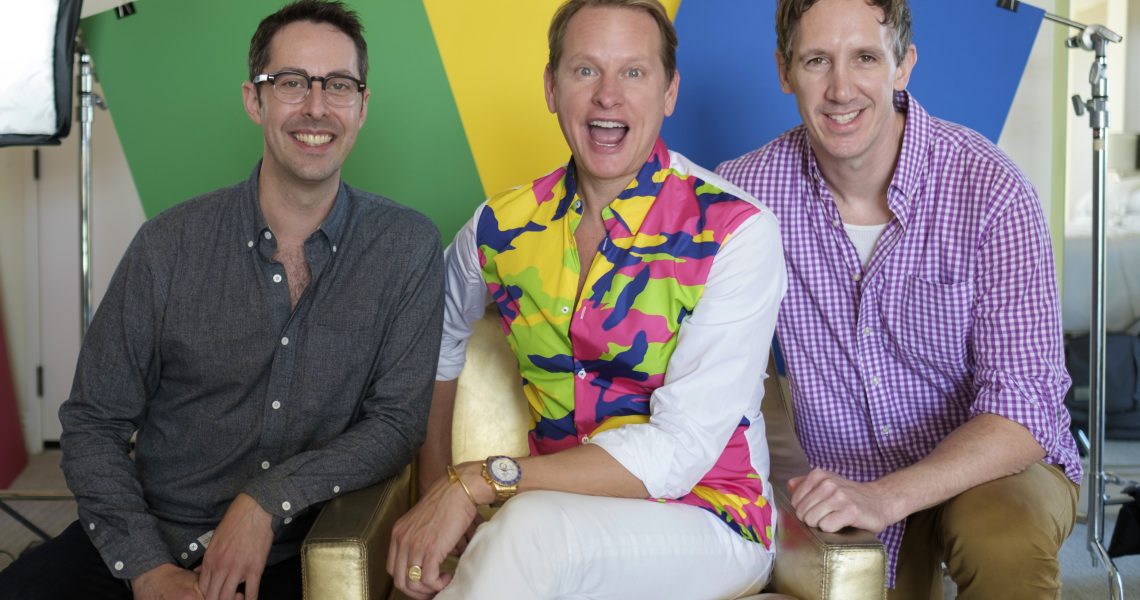 In an era where men perceived as gay were often depicted as either pathetic or pariahs, International Male asked its audience to reconsider its deeply rooted homophobia.

Now a new documentary called All Man: The International Male Story is depicting the rise and fall of the edgy menswear catalog, which ceased its mail order operation more than a dozen years ago.

Fun Facts: The word “gay” never appeared in the catalog as a reference to either the fanciful fashions or the men who modeled them. Most of the IM models were actually straight — which some say helped lend appeal to even the most off-the-charts outfits.

But make no mistake: just as Elvis made it cool to bump and grind in the ’50s and the Beatles helped long hair become masculine again, International Male helped move the needle on gender expression. The creators of the catalog, comprised of men and women whose sexuality ran the gamut, were a fashion-forward vanguard whose ideas pushed boundaries in the decades between David Bowie’s Ziggy Stardust and red-carpet Billy Porter. 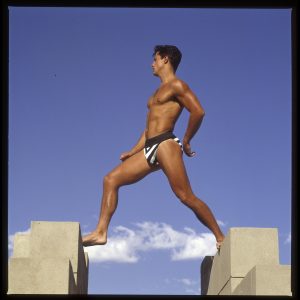 According to All Man co-director Bryan Darling, “If you had a mailbox, International Male gave you access to the resources to dress in new expressive ways. Remember that this is predominantly a time before the internet: you only knew of what you were directly exposed to, and in many ways, things were really limited.”

While roomy draped suits were all the rage (Arsenio, anyone?) and most everyday American men were confined to their Banana Republic uniforms, International Male dared to propose alternatives. Some of their suggestions were outrageous, says Darling, because IM definitely “wasn’t the catalog for khakis and a blue blazer. It was for something different; garments intentionally cut tighter to the body in a range of colors and styles atypical of mainstream men’s fashion. There were belts, zippers, pleats, puffy shirts, silks, underwear, and … well, you get the drift.”

Over time, the catalog only pushed the envelope more. “As much as people like to tease and parody International Male, it really was new fashion to a lot of people,” says the filmmaker. “The staff recounts stories of how, while on photoshoots, dads with their families would come up and say how much they loved the clothes. The staff would always be shocked, but this catalog was having an effect in many different people’s lives.”

The documentary delves deep into the International Male archives to explore how, even at the outset, the catalog set itself apart from the mainstream.

Darling’s directing partner, Jesse Finley Reed, calls IM the brainchild of Gene Burkard that started out “in a small beach cottage in San Diego. Gene got to see the world while selling supplies to military bases throughout Europe and Africa. And it was during these travels that he noticed European men, and how they seemed more expressive in their fashion. He thought to himself, “Why can’t American men do the same?”

According to the company lore, “One night in London while walking by a medical supply store, he saw a pair of underwear in the window … they were probably for incontinence or something less than sexy, but this became his “Ah-Ha” moment. When he returned to the States, he created ‘The “Sock,’ a jockstrap-like piece of underwear, using fabric, staples and tape to make a prototype to show the seamstress. A little later he borrowed $5,000 to run an ad in Playboy… yes, Playboy. And it went gangbusters.”

That company was originally called Brawn of California, and by 1976 had expanded into International Male. By the end of the decade, the brand was as ubiquitous as the soundtrack to Saturday Night Fever. 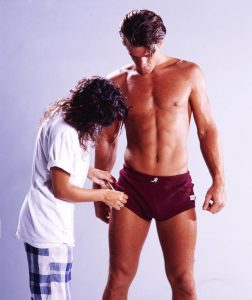 By the early ’80s, many of the recurring models featured in IM catalogs were developing followings of their own. And, because of the skimpy swimsuits and in-your-face fashions — as well as the handsome men modeling them — many boys coming of age developed their first crushes on the stars of their glossy wish books.

Those elements were at the nexus of what made International Male required reading, says Reed. “We actually believe it’s the trifecta of three things: the fashions, the models, and the freedom — or self-expression, we sometimes like to say. To make it successful and unique it needed all three of those elements. Sure, for different people, different aspects win out. I mean, some gay men we’ve spoken to practically had relationships with their favorite model.”

After a pause, he reconsiders. “I am joking,” says Reed. “In fact, almost all the models were straight. And for gay men, it’s always a shock to learn that the catalog had a large, straight male and female audience as well. But think back to Miami Vice and Don Johnson in his pink suit… Where would you find something like that in your mall? Sears? Macys? International Male created choice, as well as access to everyday people throughout the US — and even better, you could get it sent to your mailbox. So, no one had to know.”

For more than a decade, International Male cruised along as a secret of the gay underground, with a few straights who viewed the catalog as their occasional walk on the wild side. Eventually the owners launched a spinoff called Undergear. Now also serving retail customers out of  a small outlet at the edge of West Hollywood, IM sat atop its own little niche in the fashion world by creating a space where men could dress to please themselves, their gay counterparts or … like something off the cover of a ladies’ romance novel set in the 1800s.

To this day, no one can confirm that the Puffy Shirt episode of Seinfeld was the moment when Middle America first took notice of International Male. Sure, Prince and Jimi Hendrix had rocked the pirate shirt look on stages years earlier, but few dared to don such garments on any day not called Halloween.

“We haven’t had a chance to talk with Jerry Seinfeld or Larry David in person,” Reed admits, “but we have had many people tell us that the Puffy Shirt was, in fact, inspired by the IM shirt. Rumor has it that Seinfeld’s costume designers shopped at the West Hollywood store, where they bought the Ultimate Poet’s Shirt (aka the Puffy Shirt) and it and subsequently inspired the show. We cannot yet confirm that it’s true. But we’re working on it.” 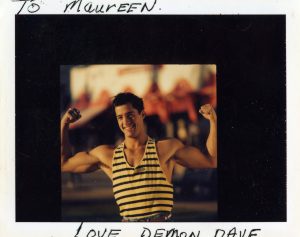 So… what happened? How did this fashion pioneer disappear just as LGBTQ people were becoming more accepted?

“There are a few answers,” muses Darling, “but I think one that rises to the top is actually in your question: the world changed and became more accepting, and because of that, International Male was no longer unique. They had built their brand as an outlier, as a one of a kind place for boundary-pushing men’s clothing, which allowed them to present a new kind of man — a new masculinity, you could argue. And although they were an early adopter to the internet and had an online store, they quickly became one of many.”

Reed nods. “Our working assumption at the moment is that the parent company, Hanover Direct (who bought Brawn in the mid-’80s), didn’t really know how to keep the brand relevant as competition grew. Towards the end, the catalog seemed to be pulling out all the stops without a clear, definitive vision … and perhaps became the parody it was always fighting against.”

Thirty years after their splashy debut, International Male was no more, and Underwear mailed its last catalog in 2015. But, for an entire pre-internet generation, IM will be fondly remembered for the fantasies its readers lived out through its pages.

“As gay men ourselves,” Darling adds, “we had only read it as something exclusively for gay men when we started. But, as we mentioned before, International Male was for any guy who wanted boundary-pushing fashion. The catalog had lots of different audiences: urban and rural; black and white; gay and straight, the list goes on. There were many celebrities who shopped there, too — everyone from (the boy band) 98 Degrees to Burt Reynolds. In our interview with Carson Kressley, he talked a lot about how it provided the groundwork for the metrosexual movement, and that men could wear clothes just for fun. So, the magazine-catalog, or magalog, was very much a how-to lifestyle guide, too. There are many tales of women taking their men into the stores in Southern California to dress them more like Don Johnson or Fabio.

“Obviously,” says Reed, “there are a lot of ways to tell this story, and certainly a lot of yummy visual candy to bring viewers in. But in all honesty, the documentary is about a lot more than lilac-colored Aviator Jumpsuits. The reason we’re making the film is because we became fascinated with how a little clothing catalog helped transform ideas about masculinity and self-expression in men in America. The catalog being labeled ‘gay’ is probably at the heart of our motivation. Although it never printed the word, it was chronically associated as such. Why? Because it depicted men in a new way. And because of that, it was seen as a threat to masculinity.”

Darling wants to amplify that. “Labeling something as ‘gay’ is heteronormative masculinity’s way of defending itself,” he says.

“As documentarians, we are attracted to this story because it can be used to explore broader cultural shifts that were taking place: the rise of the objectified male body, a growing LGBTQ presence, and greater self-expression. A lot of people associate IM with a greater freedom, which it did provide. At the same time, it set up a model of self-expression tied to increasingly hyper-masculine physiques. Additionally, aside from Shemar Moore and a few other models of color, the publication was predominantly populated with images of whiteness. We’re aiming to unpack all of that in the documentary.”

(Look for All Man: The International Male Story later this year at film festivals across the country.)

All images are courtesy of ALL MAN: The International Male Story ­© Brawn, LLC 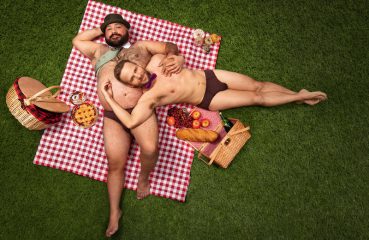 Tom Goss is learning to like The Happy Accident. As we speak, Goss is getting the first shows of a new tour under his belt. And these concerts — like the new Territories album... 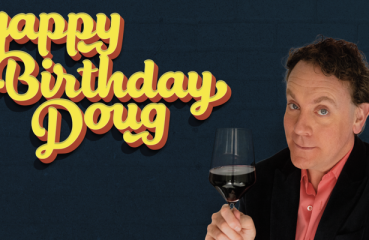