Miami — Where Wellness Meets Waves, Warmth and the White and Winter Parties 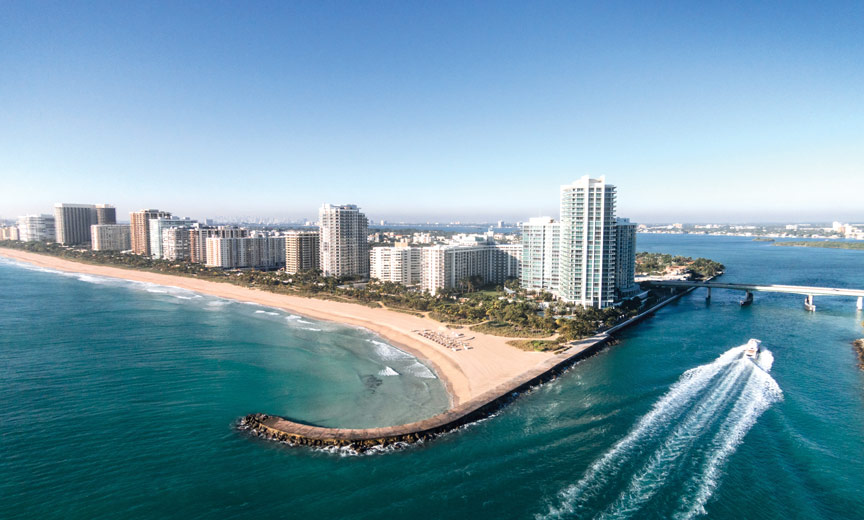 How do you live your best life in Magic City? We’ve got food to taste, sights to see and culture you’ll want to catch.

Everyone who lives a chapter in Miami tends to believe those were the years when the Magic City hit its peak: Everyone was there! Supermodels! Scarface! Madonna! Versace! Miami Vice! The Rat Pack! By the time my husband and I landed in South Beach, Versace was gone and Madonna had moved on. Instead there was Art Basel Miami Beach and Michelin-starred chefs opening restaurants in restored Art Deco hotels while starchitects like Herzog & de Meuron designed parking garages on Lincoln Road.

Miami has been reinventing itself ever since its inception as a winter resort in the 1920s, and every renaissance reveals new attributes. The city’s nickname derives from its seemingly magical growth from a barrier island of less than 1,000 residents to a metropolitan area of nearly 5.5 million in little more than 100 years. Since the establishment of Miami’s first hotel in 1884 (appropriately named the Peacock Inn) and on through Dionysian days of drag queens and supermodels, Miami and the Beaches have remained inviting — particularly for the LGBTQ community. Dade County passed a human rights ordinance in 1977 that banned discrimination on the basis of sexual orientation in employment, housing and public services (at least until Antia Bryant arrived on the scene). Today, Miami is one of the world’s most LGBTQ-friendly destinations, hosting guests from around the world for White Party and Winter Party, and Miami Beach Gay Pride.

For many, it’s all about the miles of sugar-sand beaches, but there are plenty of ways to seek wellness in Miami — sand optional.

In recent years, Miami Beach has become a nexus of health and well-being. Soul Tavern (soultavern.com) in Sunset Harbor exemplifies that trend in a neighborhood rich with yoga studios, juice shops, Flywheel classes and Botox beauty bars. Surrounded by a lush garden patio trellised in vibrant bougainvillaea, the plant-based gastropub is an oasis of healthy living with award-winning design by Pravda Architecture. Owner Jason Gordon, who has a doctorate in Chinese medicine, has created a convivial tavern where Korean barbeque tempeh sliders and vegan mac-and-cheese complement nearly forty hand-crafted elixirs designed to combat ailments from anxiety to hangover – perhaps negating any ill effects from the sangria and bottomless mimosas of weekend brunch.

Nearly 200 boutique and resort hotels line the shores of Miami Beach, notably along Ocean Drive – a mile-long stretch of restored Art Deco hotels designed by a veritable Who’s Who of 20th-century American architects. At the northern end stands a stately neo-Colonial structure with a four-column portico once known as The Betsy Ross Hotel. What looked like a Southern plantation home was actually built in 1941 amidst the nation’s nostalgic craze for Colonial style.

After an ingenious two-year transformation that incorporated the neighboring Carlton Hotel, a 1930s Art Deco gem on Collins Avenue, The Betsy (thebetsyhotel.com) was reborn as a single property in December 2016. The 130-key hotel now boasts an Art Deco wing and a Colonial wing connected by a suspended pedestrian bridge enclosed in what looks like a gigantic dinosaur egg but is really a passageway that leads to a sumptuous Library. This bibliophile’s refuge complements Writer’s Room, the hotel’s artists’ residency program, inaugurated in honor of owner Jonathan Plutzik’s father, a three-time Pulitzer Prize finalist. Since 2012, Writer’s Room has hosted over 400 artists, including Amy Tan, Jane Smiley, and John Guare. 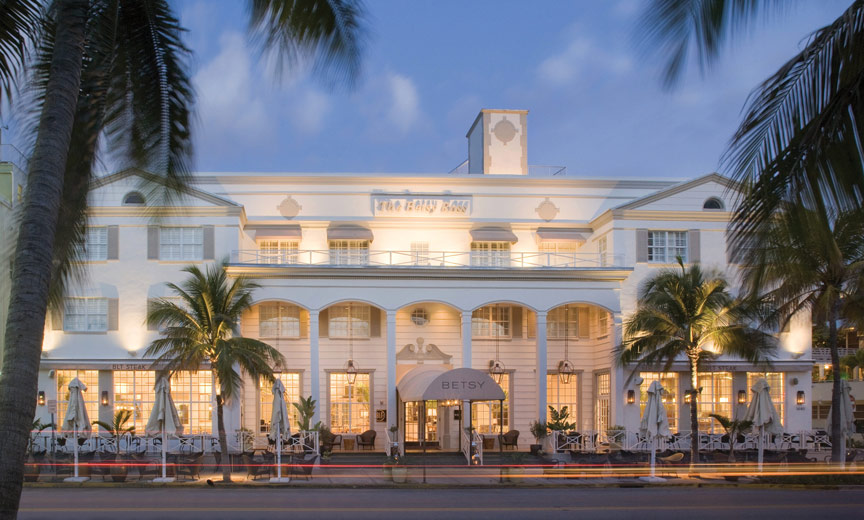 The Betsy’s spacious oceanfront Royal Suites are furnished in tropical plantation style with ceiling fans and walnut floors. Spa bathrooms of Carrera marble feature walk-in showers and bath mirrors with built-in LCD televisions. Classic barware complements curated guest libraries, so you can sip a Cuba Libre while reading Hemingway. On the Skyline Deck, a suspended lap pool hovers high above a courtyard atrium, so it’s like swimming laps in the air. Sunrise yoga on the rooftop segues nicely into a massage at the tranquil outdoor spa, where treatments utilize natural ingredients such as mandarins, blueberries, and sugar plums. As Hyam Plutzik wrote, “Expect no more. This is happiness.”

Dine with a Unicorn:

If you’re dining at the feet of a 12-foot-tall golden unicorn created by Damien Hirst and valued at more than $6 million, you are seated at Pao at Faena (faena.com), where Top Chef champ Paul Qui is determined to wrestle your gaze from the resplendent dining room and fix it on the boldly inventive Asian-influenced food. This fiercely fabulous funhouse is within the phantasmagoric labyrinth known as Faena Miami Beach. What was once mid-century Hollywood hang-out the Saxony has been transformed into a surrealist rococo playground where red velvet and gold leaf frame a fanciful fantasy created by a team that included architects Foster + Partners, Rem Koolhaas’s OMA, and theatrical visionaries Baz Luhrmann and Catherine Martin

Why have Qui’s culinary chops earned him a James Beard Foundation Award? The answer becomes apparent with a cobia kinilaw (as crudo is known in the Philippines) soaked in coconut milk and red onion with heart of palm and cilantro. Qui’s cuisine incorporates elements from his native Philippines, as well as Japan, France, and Spain — perhaps most strikingly exemplified in the dish called Unicorn. An Instagram star, the uni corn pudding arrives in its own sea urchin shell atop a bed of dried spice: exactly what you want to eat at the feet of a golden unicorn.

What was initially a beloved Greek restaurant in Montreal has become a gastronomic juggernaut for owner and executive chef Costas Spiliadis — with global outposts in New York, Athens, Vegas, London and Miami. Located in the SoFi neighborhood at the southern tip of South Beach, Milos Miami (milos.ca) is probably closest in spirit to Spiliadis’s original vision. Each day, their fish market offers more than 20 species of fish caught by Milos fishermen along the Mediterranean and prepared with the lightest touch. Housed in a cavernous white marble cube that neatly nods to ‘90s Miami nightlife, the restaurant buzzes with animated energy from sunset through closing. An attentive staff ably supports a stellar kitchen whose finesse is manifest on each plate of pristine seafood. From the arrival of a small potted plant of oregano (complete with cutting shears) to a tower of lightly-fried zucchini and eggplant, and on through to a dessert of baklava ice cream with Greek yogurt and seasonal fruit, Milos Miami transports you to a Greek isle without ever leaving the Beach. 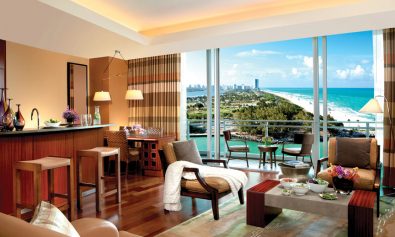 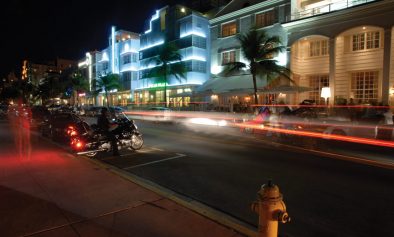 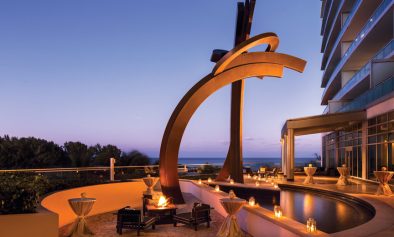 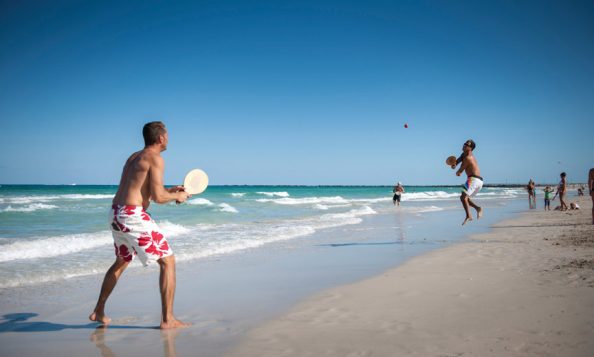 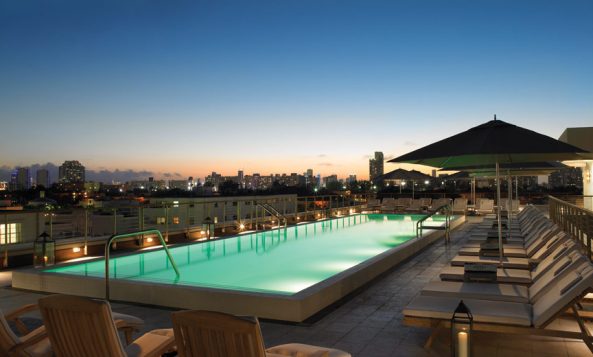 What says Miami like a soaking in a tub overlooking the ocean with a bucket of Champagne on ice? How about adding a snack from the full-service gourmet kitchen in your floor-through suite atop The Ritz-Carlton Bal Harbour (ritzcarlton.com). With private terraces that overlook the ocean and the 99-acre nude beach at Haulover Park, the suites at The Ritz-Carlton Bal Harbour deliver you into a lush life marked by mahogany, leather, and crystal. Asprey toiletries fragrance the air with hints of citrus and jacaranda. Have an in-room massage or head to Exhale Spa, the 10,000-foot wellness sanctuary overlooking the water. And should you feel overwhelmed by the 100-plus luxury boutiques located in the lushly-landscaped retail oasis, The Ritz-Carlton Bal Harbour offers a couture concierge who remains on call for wardrobe consultation, so you’ll be dressed just right for a visit to Sunset Lounge at Artisan Beach House, a beach-bright restaurant with views onto Haulover Cut.

Back at the Betsy Hotel, there’s no shortage of good reasons to dine at LT Steak & Seafood. Chef Laurent Tourondel’s homage to classic cuisine is housed in a room redolent of post-war Miami glam. For many, it’s all about the fact that no sooner are you seated than a server presents a basket of hot popovers and a side of butter. Flavored with gruyere cheese and cracked black pepper, each popover is the size of a prize-winning Périgord truffle — and equally delicious with butter oozing through its airy center: they’re like wellbeing in a basket.

Also check out, 5 Reasons to Escape to Palm Beach for a Long, LGBTQ-friendly Weekend 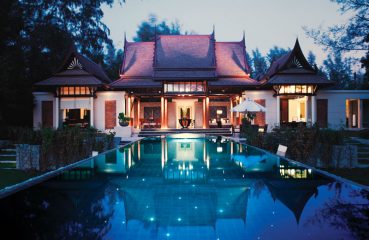 Why choose between two destinations for your ultimate honeymoon when you can enjoy an expedition to Thailand and Vietnam steeped in culture, leisure and luxury? Picture gorgeous... 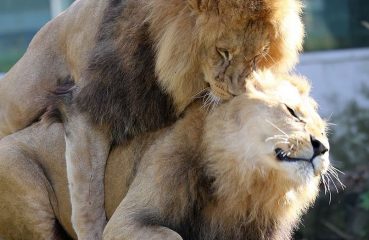 “Homosexuality in Animals” is Now a Zoo Tour During Amsterdam Pride

Homosexuality in animals is as old as nature itself, and same-sex attraction has never been the sole province of homo spaiens — as the Netherlands’ Artis Zoo is all to...