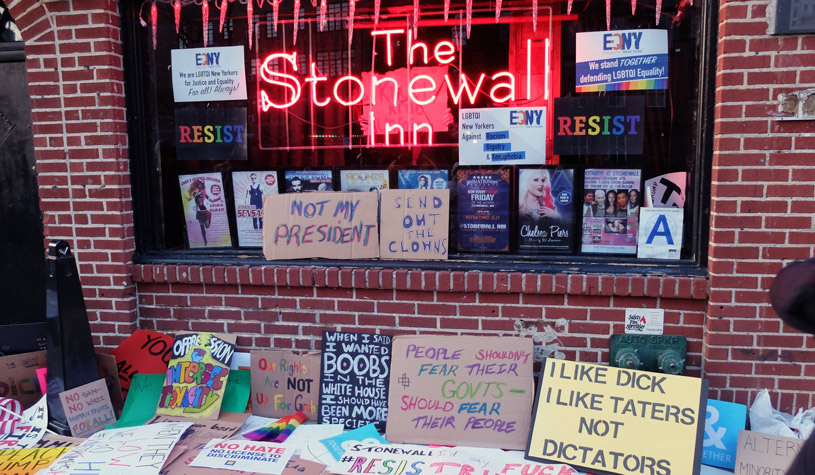 Monday evening the Stonewall Inn was dedicated as a national monument, 47 years after gays turned a police raid of the bar into a gay riot.

Now in the wake of marriage equality, the end of Don’t-Ask-Don’t-Tell, Gay Pride month and the Pulse nightclub massacre in Orlando, the entire LGBT community is taking stock of itself. Having the President of the United States declare that your once-marginalized community deserves a monument may be only a symbolic gesture, but as such, it resonates powerfully throughout the culture.

Read Next | How Much Do You “Really” Know about Stonewall History?

In a statement released by the White House, President Obama said, ” Stonewall will be our first national monument to tell the story of the struggle for LGBT rights. I believe our national parks should reflect the full story of our country, the richness and diversity and uniquely American spirit that has always defined us. That we are stronger together. That out of many, we are one.”

In 1969, the year of the Stonewall uprising, homosexuality was still classified as a mental illness by the American Psychiatric Association. A 1967 TV news special two years earlier, “The Homosexuals” (posted below) featured CBS correspondent Mike Wallace describing gays as “not interested in, nor capable of a lasting relationship.” The network also conducted a poll at the time which found that Americans considered homosexuality “more harmful to society than adultery, abortion or prostitution.” Want to see how far we’ve come in the past half-century? Click below and prepare to be startled. After decades on the drawing board and numerous intermediary flying machines, Paul Moller has a working prototype that you can actually fly. Of course, it is a bit spendy....

Love (and Marriage) Make the World Go 'Round

News from Norway and Puerto Rico, while struggles continue in Mississippi and Ireland...