Want to Know the Real You? Look on the Dance Floor

I learned things about myself I could never have known otherwise on the dance floor.

I’ve been an avid clubgoer since the glory days of disco, before I understood that being gay wasn’t an intermittent impulse I could keep at bay. From the moment I stepped into the swirl, an instinct took over that let the crowd, the lights and the music work their way into my psyche until my body had no choice but to respond. I danced at straight clubs, watching guys watch the girls in a way I did not – all of us caught in rhythm’s thrall. I danced until my partner would pant for a break; then I wanted to dive back into the throng as soon as she’d caught her breath.

I took “You Should Be Dancing” as an imperative. I’d never felt more free — until I made a clandestine trip to the Old Plantation in Dallas one fateful spring break — secretly visiting a club that was unabashedly and unapologetically gay. The place was cavernous, with little alcoves off to the sides where gay boys retreated to drink and smoke — cattily sizing up the competition or lusting aloud after their dream dudes.  And, as the lights swirled and the polyester shirts got clingy, I allowed myself for the first time to soak up the sights, sounds and scents of men in tribal communion united by music. When the DJ put on Donna Summer’s “I Feel Love,” I felt like I’d been transported to another dimension.

Disco died an ugly death of course — falling victim to what “Le Freak” composer Nile Rogers later called a toxic combination of racism and homophobia. But it didn’t stay dead for long, and was soon reincarnated as something the MTV generation simply called “dance music.”

The first time I danced with a guy was in Manhattan. I was on a visit from Austin with my then-girlfriend, and her NYU-student brother Tony begged us to join him at an underground college dance. We watched the crowd bounce up and down spastically to the B-52’s and Devo for a bit. Suddenly, as thunder and storm sounds rumbled from the speakers , Tony grabbed my hand. “Come on,” he said, we gotta dance to this!” He dragged me to the middle of the floor for my first exposure to “It’s Raining Men.” As far as I know, Tony was straight, but halfway through the chorus, I understood with certainty for the first time that I wasn’t.

Not long after, I broke it off with Tony’s sister and began venturing out to dance clubs alone. One was a straight nightspot called Club Foot (“the coolest place ever named after a physical affliction,” according to their radio ads), where I danced to the Go-Go’s and other new wave bands as they played live on stage. But the gay dance clubs still called me back. And — wouldn’t you know it? — on my first foray into a gay dance club in Austin, I ran across a copy editor from the city paper where we both worked. Still in the closet, I explained over the din that I was just there looking for someone. He arched a knowing eyebrow and replied smiling, “Aren’t we all?”


By the time I moved to LA as the ‘80s gave way to the ‘90s, I was hooked on dancing, but also partnered to a guy who hated the club scene in general and dancing in particular. So instead, we spent nights in front of the television and weekends playing card game marathons with friends. But sometimes after work, I’d slip into Oil Can Harry’s at happy hour and marvel at the permed blond boy in white patent leather go-go boots and short-shorts twirling a baton on the floor to “Vogue” — entirely by himself.

I let dancing go, telling myself it was a pastime for the young, until I moved to New Orleans with a new partner. I found myself on a dance floor again at Oz, a mainstay of Bourbon Street’s gay nightlife.  As we wandered in — knocked sideways by the heat, humidity, and pheromones in the air — I realized  I’d been wrong about being too old to dance. The shirtless guys in the sweaty mass included men in their 50s and beyond. I remade myself in the image of the guys there: I got myself a little swagger, something friends described as my “panther walk ”— half-speed with rolling shoulders, as I claimed my ground and surveyed the revelers. Ultimately, my guy came to hate it and the attention it generated.

When I fell in love again, it was with somebody who loved to dance to Britney and Icona Pop. We’d rush to the floor to dance with and for each other, our conduct causing a stir of envy, lust or disgust from onlookers. I wouldn’t dance any other way now. I’m not the best out there, but I’m the scandal of many a wedding reception in the way I always let the music have its way with me.

I have a favorite photo; one that may foretell my future. It’s a snapshot that captures the great conductor Leonard Bernstein (who was gay and married to a woman) on the dance floor at Studio 54. The 70-something-year-old maestro’s tux shirt is open to the navel and he’s sweating profusely — with an expression on his face that could only be called beatific. In one hand is a martini; in the other, a cigarette. Opposite him wearing next to nothing is a boy with a face right out of a Botticelli painting, his eyes locked on Bernstein as if he were gazing upon the face of God. I don’t need the cigarette, but the rest looks like paradise to me. 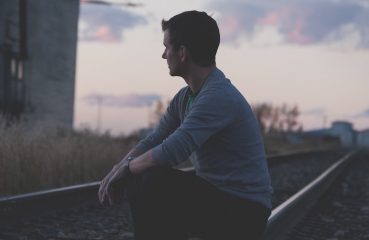 One Gay Man Says: Sometimes it’s Okay Not to Forgive and Forget Your Ex

Should there be a statute of limitations when it comes to forgiving and forgetting with an ex-boyfriend, partner or husband? One day, I accidentally discovered that my ex had... 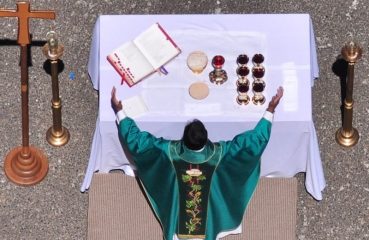 One Catholic Remembers the Verbal Abuse He Took — From a Priest

We are bombarded almost daily by instances of sexual abuse perpetrated by religious leaders, and rightly so. However, another kind of abuse, which can be equally pernicious, gets...