This Is How Margaret Cho Really Likes to Party 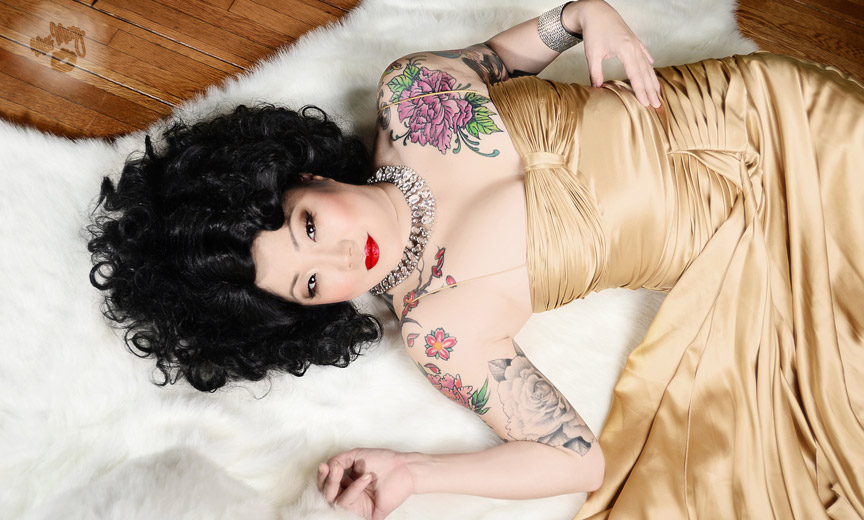 Margaret Cho talks about hosting (as in throwing parties) overlaps with hosting (part of her job as an entertainer). “For me, my shows are often a grand party, where I get to host it and be there for everyone,”Cho says. “That’s what a comedian is, essentially.”

In many ways, being an entertainer doesn’t stop when Cho steps off the stage. “It’s my social life and my base as a person because I hang out with comics pretty exclusively,” she explains. “It’s where my friends are.”

That’s one reason she continued to make stand-up a priority, even as her schedule became crowded with other commitments. “It’s just something that I couldn’t imagine living without,” Cho says. “I think that it’s weird when people pull away from doing comedy because I think it’s the most exciting.”

As Cho continues to provide love to her fans, she’s graduated to a new level of loving her friends. “Mother” has become Cho’s nickname among her many gay friends — whether they’re older or younger. “I’ve gotten to the age where, in my fag-hag-ism, at this point in my life, I’m the ‘maternal’ fag hag.”

Cho is also no stranger to hosting when out of the spotlight. “I think my favorite is a really intimate dinner, where it’s just a few people,” she says.

Though Cho enjoys the holidays, she’s not one to craft a cookie-cutter holiday event . When it comes to more formal holidays like Thanksgiving, she says, “it’s more about the food than it is about any sort of ‘following in the tradition of giving thanks’ or whatever is considered the trappings of the holiday.”

What she ends up with is a celebration that’s light on ceremony but heavy on cultural fusion. “Usually I’ll host something at my home in Los Angeles with my family and my friends. And we just do a potluck,” she says. “We have sort of a traditional Thanksgiving, turkey-and-trimmings kind of thing, but also we have a lot of Korean food, too.”

This idea of not conforming to traditional holiday expectations carries over into the winter holidays, as well. “I give gifts generally throughout the year as opposed to [being] a Christmas gift giver,” she explains. “But it is a nice reason to get together.” 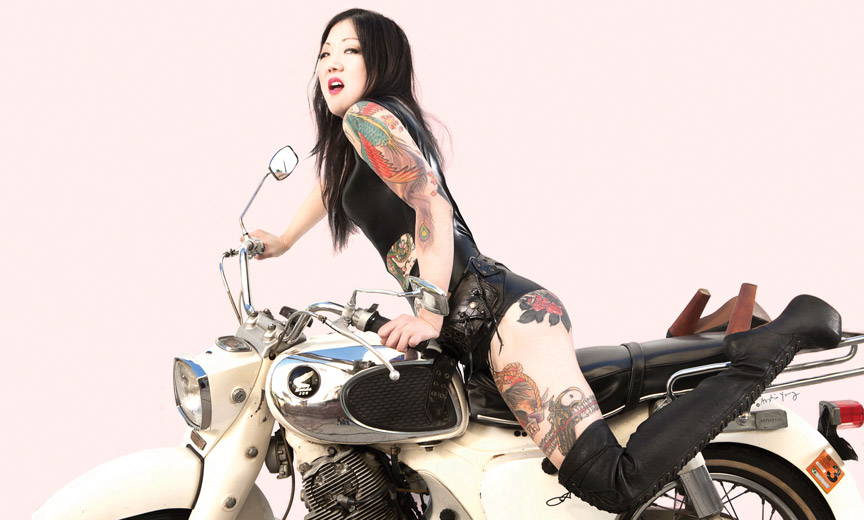 Cho says she has scaled back on inviting huge groups of people to her home due to one of her own greatest party pet peeves. She doesn’t like when people who use her parties as a chance to go souvenir hunting. “I have a lot of little beautiful sacred art and art pieces that I’ve collected over the years, and, unfortunately, things have gotten stolen from my house,” she says.

As for Halloween, Cho got her fill of it growing up. “Traditionally, where I’m from – San Francisco – Halloween has always been such a huge deal. I think maybe because of that, I sort of reject it a little bit,” she says.

When she does dress for the occasion, Cho says her go-to costume is Björk. “I’m such a dead ringer. I’m a few different Björks: Dancer in the Dark Björk. And I’m also — what’s the one where she’s on the flatbed truck: ‘Big Time Sensuality’? I’d do ‘Big Time Sensuality’ Björk with all the weird, knot-like hair things. And then I’ve done a swan kind of thing before. I took a stuffed-animal swan and then I just kind of wrapped the neck and put it on my body.”

Her upbringing aside, a life full of acting, performing in burlesque and belly-dancing has also provided Cho no shortage of wearing costumes. “When you do enough of that, then you get a little bit … low-vibe about it all.”

Cho Remembers Dancing with the Stars

Some of the glitziest costumes of Cho’s career were worn during her appearances on Dancing with the Stars. Cho tells me that she doesn’t attend too many parties that call on her to break out the ballroom skills she learned on the show, but she reveals that some Dancing with the Stars cast members host events with that in mind.

“There are actually parties where all those people go; you get on an email list and you get invited with, like, Susan Lucci and everybody,” she says, with a laugh.

According to Cho, hunky Maksim Chmerkovskiy has at least one huge party annually at the Waldorf Astoria or an equally swanky space. She’s also received personalized video invites from dancer Tony Dovolani. “You can tell he has to make hundreds of them because they invite hundreds and hundreds of people.”

Though she’s fascinated, she’s been reluctant to join — in part, she jokes, because the dancers “get drunk really fast because they have no body fat.”

However, there’s another kind of star-studded party Cho never wants to miss.

“My other favorite kind of gathering is late-night after a rock show,” she says. “My friend has these amazing rock shows, where everybody comes in town to play with him, and then you have a party in his loft after the show, and it’ll start around two in the morning and end around six or seven. And it’s like: Everybody there is a famous rock star. Everybody is somebody from Led Zeppelin or Fiona Apple,” she says.

“That’s my favorite thing — where it’s just people that are normally performers, who just let all of that go and hang out for a moment and just be together,” Cho says.

Sometimes these evenings also break out into impromptu jam sessions. “You’ll see people start to play around, and you find these little tiny pockets of performance happening just because people haven’t seen each other for a long time, they want to get there and play a little bit of music.”

Cho says that she and these fellow artists relish this chance to bond, especially considering how their careers can keep them isolated. “Usually we’re on tour and on our own,” she explains. So, she says, they value, “this moment where we can actually be together and enjoy each other [and] each other’s art.”

When the conversation turns to upcoming parties, Cho tells me that she’s excited to attend more gay weddings. “I have performed a number of them,” Cho says. She got herself authorized to do so when gay marriage first became legal in California. “It’s really cool.”

Read Next | How Karl Lagerfeld Helped Reinvent a City

Anna Nicole Gets So Outrageous

One of Cho’s most bizarre Hollywood party memories is a holiday gathering thrown by the famously hard-partying Anna Nicole Smith. “I actually wrote a song about it,” Cho mentions. “I had just gone there specifically to steal all of her pills, but I didn’t find any.”

The party was not quite the blowout she’d expected. “It was a really weird time because the only guests were myself, Kathy Griffin, the wrestler Chyna and then [Anna’s] cousin, who was doing karaoke by herself in a downstairs bedroom.”

“I had actually been, a little bit, trying to get sober before then, and then it sort of all went to shit,” Cho says, when they started doing shots. “[Anna Nicole] had a huge ice sculpture of herself and you would pour Jägermeister in the top and the Jägermeister would work its way down through the body and then you would drink it at the bottom.”

Cho noticed that only a few of the guests were catching shots after they slalomed down the statue’s icy curves. “Kathy has just never had a drink of alcohol in her entire life. And Chyna was not participating; so it was [Smith’s lawyer] Howard K. Stern and myself and Anna, who were drinking out of this thing,” Cho remembers.

When the party appeared on Smith’s eponymous reality show, it prominently featured the statue and the shot-taking. There was also the impromptu make-out session Cho and Smith shared.

“She was the most beautiful woman I’d ever seen in my life, but also just a casual kind of person. You know, like one of those girls in LA you see wearing a Juicy jumpsuit,” Cho recalls. “Not a bad person, not a crazy person really. Maybe a little bit lost, but she was really an angel.”

Read Next | How Do I Prepare My Home for Holiday Entertaining?

For more information on all of Margaret Cho’s projects, visit margaretcho.com. 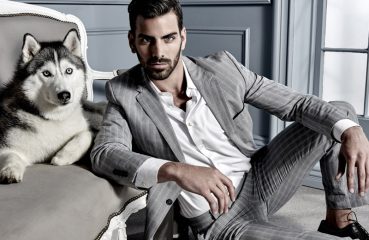 With his striking eyes, toned physique and touching personal story about succeeding as a deaf man in a hearing world, Nyle DiMarco was an early fan favorite and ultimately the... 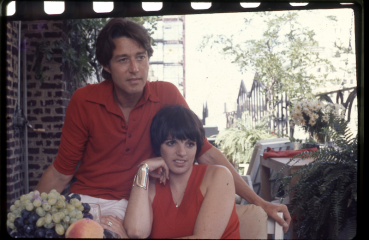 The Halston name blazed across the 1970s like a comet on a cloudless night. After designing Jackie Kennedy’s signature pillbox hat for JFK’s inaugural, his innovative...