This Is Why You Will Love Gay Helsinki 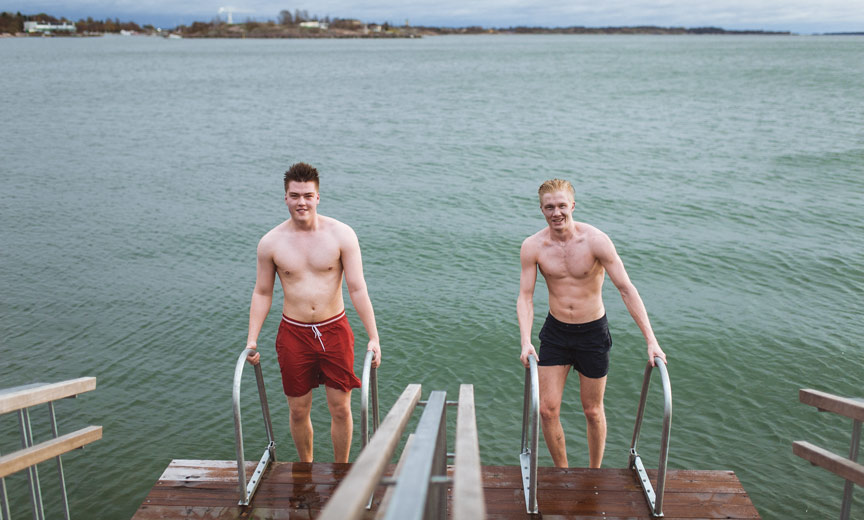 It’s possible that the single most indulgent course I’ve ever eaten was on a tasting menu at a restaurant in Helsinki; that says a great deal about what you can expect from the EU’s northernmost capital.

My preconceptions about Helsinki have always been subconsciously fueled by Tom of Finland, the Finnish artist whose tributes to homoerotic sexuality have fueled fantasies for decades. Originally employed in the Helsinki office of international advertising firm McCann-Erickson, the artist (who was born Touko Laaksonen, 1920–1991) evinced a sex-positive sensibility interwoven with a military masculinity left over from his service in the Finnish army during World War II.

In the same way they take pride in Tom, Helsinki wears its design savvy with a confident insouciance. Imagine a kind of Scandinavian Twin Peaks where Nordic sensibility mixes with Slavic exoticism. Designated a European Capital of Culture in 2000 and a World Design Capital in 2012, Helsinki prides itself on freedom and style. As Päivi Balomenos, PR Director of Design Museum (designmuseum.fi/en) says, “Democracy and design have always walked hand in hand in Finland.”

The Design Museum’s exhibition Utopia Now illuminated the central role of design in the development of the Finnish Republic, which has been celebrating its centenary throughout 2017. Founded in 1550, Helsinki has been Finland’s capital since 1917 when the nation became independent following the Russian revolution.

Read Next | Are These Hollywood’s Worst LGBTQ Portrayals Ever? Balomenos pointed out a dress worn by Jacqueline Kennedy in 1960 on the cover of Sports Illustrated from Finnish design force Marimekko. According to Balomenos, Jackie purchased the dress to assuage mounting criticism about the costs of her haute couture, thereby sanctioning Finnish design as indulgent enough for a glamorous First Lady while also highlighting its affordability. Certainly the First Lady would have appreciated the way Finnair (finnair.com) incorporates Marimekko into their textiles and tableware —not to mention that the airline’s lounges showcase local designers and design firms such as Arabia, Iittala, Marimekko, Alvar Aalto, Eero Aarnio, Eero Saarinen and Yrjö Kukkapuro.

Impressive Finnish design is also on display in the illustrious dining room of the Savoy (ravintolasavoy.fi/en). Opened in 1937 by Finnish designer Alvar Aalto in cooperation with textile artist Dora Jung and the newly-established Artek, the historic restaurant atop the Industrial Palace remains a paragon of perfect proportions. Birch veneers and club chairs are complemented by sleek lighting fixtures and such design details as the Savoy’s signature vases.

Overlooking the esplanade, the Savoy’s eighth-floor dining balcony offers a bird’s eye view of Helsinki and its beautiful cathedral. With the setting sun, the maritime city is suffused with a lambent glow. Few perspectives are more romantic. The restaurant’s dinner menu is a celebration of Savoy classics from its previous eight decades, with a focus on seasonal dishes that are plated with an elegance befitting its environment.

In keeping with Finland’s democratic ethos, Helsinki hosts Restaurant Day (restaurantday.org/en) four times a year during which pop-up restaurants burst into bloom throughout the city. Since the first Restaurant Day in 2011, nearly 40,000 restaurateurs have served a million customers and the celebration has become the world’s largest food festival. With all that going on, perhaps it’s no surprise to learn that Finland is the most caffeinated nation on earth with an annual per capita consumption of 26 pounds of coffee. What do they do with all that energy? Apparently, they walk and they forage. Fortunately they’ve got plenty of room. Helsinki is one of the greenest cities in the world with more than 60 miles of shoreline and over 300 islands. A third of Helsinki’s area consists of parks and green areas.

Finland’s forests are a smorgasbord of superfoods: blueberries, lingonberries, cloudberries, and chanterelles abound alongside wild herbs and root vegetables, all of which are cherished by the staffs of Helsinki’s four Michelin-starred restaurants.

Under Chef Jari Vesivalo, dinner at Olo (olo-ravintola.fi/en) becomes a three-hour gustatory adventure. A tasting menu might include rainbow trout from Kotka, emmer semolina from Malmgård, pike perch from Porvoo, cod from the Barents Sea, and birch, spruce, and pine from Kuivalahti — providing a gastronomic safari through the indigenous bounty of Finland. For Vesivalo and his staff, who plate produce in ways that preserve its purity, the kitchen at Olo serves as a conduit for Finnish nature. Amidst a tangle of evergreen boughs and pine cones rests a malt cracker spread with a dollop of infused butter and sprinkled with spruce salt. Bambi never ate so well. The emmer semolina porridge (the “most indulgent course” mentioned earlier) is whipped with cream and conceals a pool of chanterelle consommé; the semolina is speckled with puffed quinoa and malt. Rich and creamy and delicious with hints of umami, this porridge exemplifies the various concepts of Nordic hygge (roughly translated as “coziness”) served in a single bowl. By meal’s end, this Michelin-starred waterfront restaurant feels like home.

Given Finland’s specific longitude and latitude, its gastronomic culture is influenced by both East and West, a fact that holds true for Finnish design as well. The restraint and simplicity of Scandinavia is often complemented by vibrant color and a walk through Design District Helsinki (designdistrict.fi/en) reveals the innovative breadth of Finnish design. A neighborhood of 25 streets and more than 200 curated boutiques and showrooms, this dedicated area serves as a hub for artists as well as a state of mind for Helsinki’s creative class. As the district’s executive director Minna Särelä has said, the neighborhood provides a brilliant canvas to witness “the bravery and creativity of Helsinki’s designers.” Housed in an Art Nouveau building from 1909, Hotel Lilla Roberts (lillaroberts.com/en)opened in 2015 on a charming side street where its corner restaurant Krog Roba and lobby bar “Lilla e.” serve as the unofficial commissary for denizens of the Design District. A member of SLH (Small Leading Hotels of the World), the 130-room design hotel is a part of the Kämp Collection, which also operates Hotel Haven (hotelhaven.fi/en) a few blocks away. The stylish rooms at Lilla Roberts are marked by dramatic Art Deco furnishings in black velvet and velour with leather and chrome accents. Walk-in rain forest showers are large enough for two, as is the case at Hotel Haven where the luxurious rooms are furnished in tones of aubergine and gunmetal with dark wood accents. If Lilla Roberts is for one’s inner movie starlet, Hotel Haven is for its ever-elegant older sister.

Breakfast at Hotel Haven is served in a stunning enfilade in the historic Sundman House, which overlooks Old Market Hall and the Helsinki waterfront. As the sun rises, the waterfront comes alive with locals who frequent the historic market hall, which has been serving customers since 1889. The restaurant Story’s salmon soup evokes ancient narratives of Finnish fishermen.

Equally delicious, the Design District’s Grön (restaurantgron.com) seats about 20 lucky patrons in a small dining room that opens into the kitchen where the amiable staff work the tight quarters as smoothly as a choreographed corps. The four-course, plant-based “Grön Menu” is based on seasonal Scandinavian produce supplied by foragers, fishermen and “forest men” whose nettles, beetroots, mushrooms, berries and fresh catches are rendered with delicacy into stunning starters and mains. Biodynamic wines are perfectly paired by a knowledgeable sommelie, and the overall atmosphere is akin to eating in the kitchen of a dear friend who happens to be an exemplary chef.

One of the most frequently cited statistics about Finland is that there are 3.3 million saunas in a land of 5.4 million people — which works out to about one sauna for every two Finns. In recent years, the nation has seen a resurgence in public saunas to foster a sense of community — without body shame. 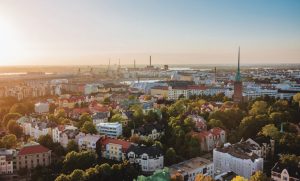 Situated on a peninsula along the Helsinki seashore, Löyly (named for the steam that rises from hot rocks doused with water) is less than a mile from the city center and yet the coastal atmosphere is akin to being in Helsinki’s outer archipelago. What was once an industrial area is now a toney residential neighborhood with a stunning architectural statement at water’s edge.

With two wood-heated saunas and a smoke sauna, Löyly offers breathtaking panoramic views over the sea from within the public saunas and its convivial restaurant and bar. An expansive wooden terrace built over the water brings the sound of the waves to your table. Should the weather prove inclement, both the sauna and the restaurant are heated with massive fireplaces. For those with the DNA of polar bears, there’s also a hole in the ice for winter swimming.

Throughout its yearlong centenary celebrations, Finland has focused on equality and democracy, which was made manifest for numerous LGBTQ couples when same-sex marriage took effect here in March 2017. For those seeking a taste of Tom of Finland’s world, the exhibition Helsexinki transforms the fourth floor of Helsinki City Museum (helsinginkaupunginmuseo.fi/en) into a red light district — complete with a comfort stop well known amongst gays as a trysting spot. Throughout the exhibition, visitors learn how the city’s landscape hosted public sex throughout the decades. At the National Museum of Finland (kansallismuseo.fi/en), I spotted a vintage poster depicting a lady sipping champagne on a terrace in the city center with a Helsinki tram in the background. The inherent glamour of that scene is replicated at Nokka (ravintolanokka.fi/en), the harborfront restaurant that opens out onto the Baltic Sea. Voted Best Helsinki Restaurant numerous times, Nokka works with a curated collection of small producers and purveyors located throughout Lapland and Finland. Should you wish to picnic with champagne along the water, Nokka makes gift bags of produce and handmade products available at its restaurant’s café and shop. Sip along the Baltic and toast, ‘Hell Yeah to Helsinki’ — a cosmopolitan wonderland at the top of the world.

If you’re planning a trip visit Helsinki, perhaps a pop over to Norway might be in order. 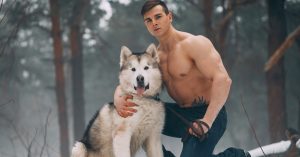 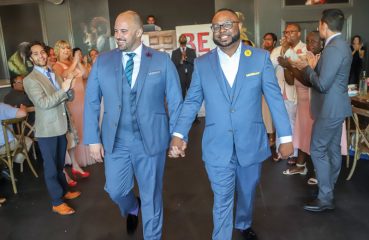 Jeffrey has been writing about weddings for Metrosource for years. Now he describes how he finally had one of his own at a beautiful beach venue in Asbury Park, New Jersey! Why... 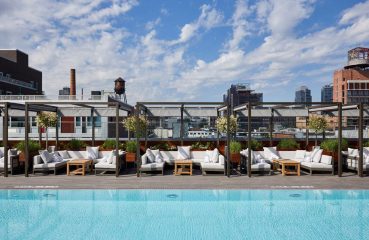 These Are the Best Gay-Friendly Hotels in NYC

Simply seeking shelter, or looking to live in the lap of luxury? Either way, if you’re gay and looking for a Manhattan or Brooklyn hotel that is LGBT-Friendly we have...