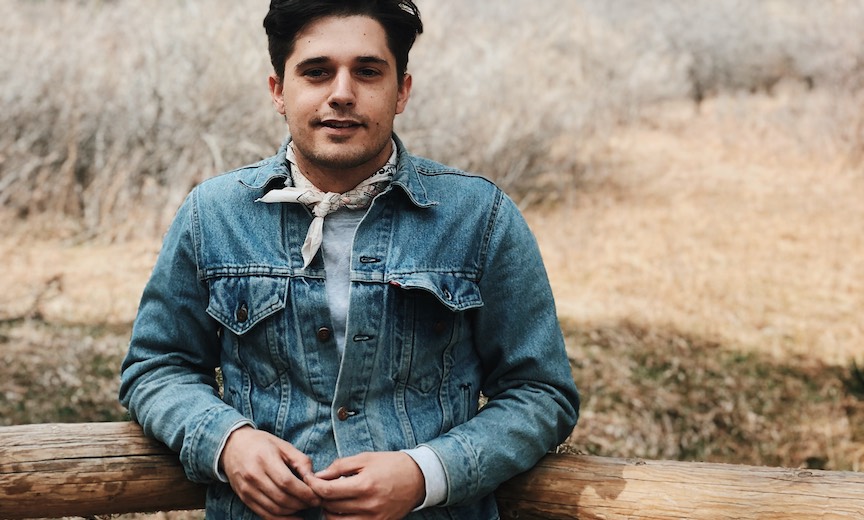 Joni Mitchell is experiencing a resurgence of appreciation these days without singing a single note. In the wake of her Grammy-nominated 75th birthday tribute concert, Andy Mientus was one of two queer artists paying homage to Mitchell. Each performed one of her albums in its entirety in Los Angeles on the same day.

Brandi Carlisle led her audience through Mitchell’s Blue at Walt Disney Concert Hall, just as Andy Mientus was hosting a more intimate affair at the Hotel Café, a mere seven miles away. Since I couldn’t be two places at once, I chose to spend the night with Andy. Andy covered Mitchell’s third studio album Ladies of the Canyon. Even his stage clothes offered a subtle nod to the ‘70s. He entered in honey-colored flared corduroys, paired with a band-collared black shirt and vest.

Shame on me for not being more well-versed in Mientus’ body of work. I was completely bowled over by his mellifluous voice, charming manner and engaging performance. Many would agree that Mitchell has earned her place among music royalty, although some might consider her voice an acquired taste. It became clear from the first song that Mientus’ passion for the material and his ability to convey the emotions behind Mitchell’s lyrics brought the material to life anew.

Andy explained the impetus for his decision to devote an entire concert to one of Mitchell’s albums, rather than perform a cabaret-style pastiche of disparate shows he’s already done. The album holds a special place in his heart, since he grew up listening to his mother sing along to the album. Mientus also felt taking the time to explore an entire album was something his generation — weaned in the digital age of downloadable songs — missed out on.

A Little Help From His Friends

Mientus was joined onstage by a handful of guests from the Great White Way, including Shoshana Bean, Carrie Manolakos and … wait for it: Darren Criss. (Tramp Stamp Granny, the piano bar owned by Criss’ wife, is just up the street.) Andy remained a personable ringmaster throughout, and provided the connective tissue about the album and the singer/songwriter era of the early ’70s in which Mitchell rose to prominence.

One of the more poignant moments of the night connected the past to the present. Mientus cleverly used the speech heard around the world by Greta Thunberg, the 16-year-old Swedish activist who rebuked the world leaders who’ve failed to address climate change.

Thunberg’s words prefaced Mientus’ rendition of Mitchell’s ecology-awareness warning, “Big Yellow Taxi,” with its dire refrain: “Don’t it always seem to go, that you don’t know what you’ve got till it’s gone. They paved paradise; put up a parking lot.” Mientus not only did his mother proud. Ms. Mitchell would have endorsed the evening as well, since her songs got the VIP treatment they richly deserve, with Mientus sharing her songcraft with a whole new audience.