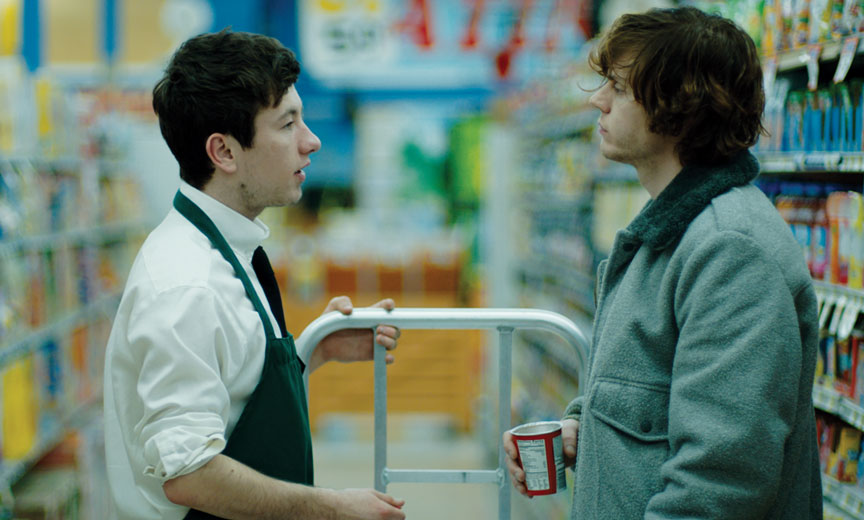 A talented cast of young actors and real-life participants reenact this real-life tale of a daring art heist. Following his documentary The Imposter (a true story that nearly defies belief), Bart Layton offers another stranger-than-fiction narrative as his first feature film. Did the idea of stealing $12 million dollars in rare books from Kentucky University first come from Spencer (Barry Keoghan – The Killing of a Sacred Deer) or his friend Warren (Evan Peters – American Horror Story)? As these up-and-coming stars act out the crime, and Layton frequently cuts to the real Spencer and Warren — who provide commentary on what they recall, although they don’t always agree. This mix of performance and documentary is a clever conceit, and at times even playful enough to have the actors and their real life counterparts interact. As the idea for the heist slowly grows from whimsy to plan, Spencer and Warren recruit two other students — Eric (Jared Abrahamson – The Travelers) and Chas (Blake Jenner – The Edge of Seventeen) — to their crew, and director Layton brings in the real Eric and the real Chas right on cue. It’s fascinating to watch the group wade steadily deeper into the quagmire of their crime, especially since all hail from middle class homes and were at the time receiving the kinds of education that should have led to good jobs and bright futures. Perhaps it’s a reminder that sometimes people do things because they wonder if they can — and then end up stuck dealing with the likes of the film’s librarian (Ann Dowd – The Leftovers, The Handmaid’s Tale). THE WORD: You’ll be charmed and disarmed by cast and convicts alike in this exceptionally well-crafted and exciting genre hybrid. COMING TO: Theaters