Famous Floorplans: What TV Characters’ Homes Would Really Look Like 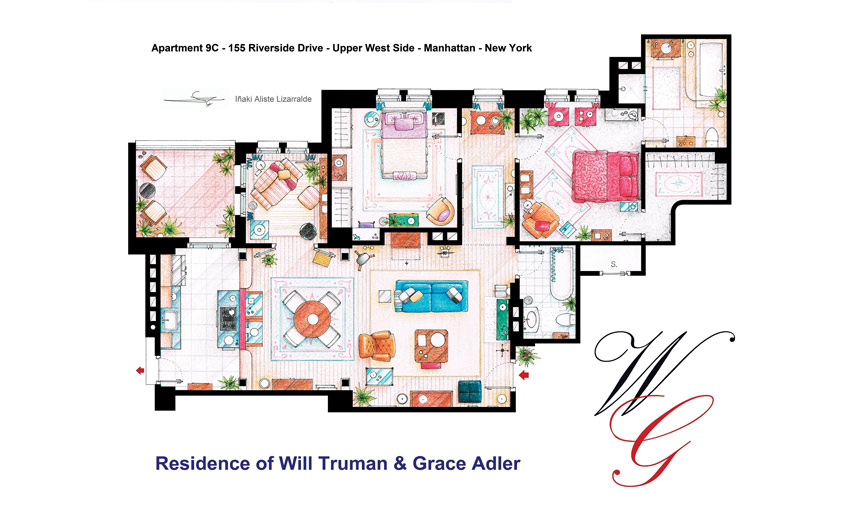 What would your favorite famous TV homes look like if they were actual houses or apartments?

“There are places I’ll remember all my life,” the Beatles once sang. Strangely enough, some of those places you’ll recall as if it was your first apartment or childhood home — even though you’ve never stepped foot inside them. And that’s where Iñaki Aliste comes in.

From his studio in Azpeitia, Spain, artist Iñaki Aliste patiently sits hour after hour with one hand on the remote control and another with his sketch pad at the ready. The mission: to create fancifully colored floor plans of places that only exist on the screen, from the late Mary Tyler Moore’s Minneapolis flat to the cartoon home of the Simpsons, Aliste has found both a market — and oftentimes a real challenge — in turning what were often never meant to be real dwellings into frame-worthy artistic renderings of the homes of beloved characters from film and television.

Aliste began half a decade ago by recreating the Seattle apartment Frasier shared with his father, Daphne and their Jack Russell terrier Eddie. “It was just something I did as a treat for myself,” the artist shrugs. “And a few years later, a friend who is a huge Carrie Bradshaw fan asked me if I could make a floor plan of her apartment in Sex and the City, and the whole idea just sort of took off from there.” 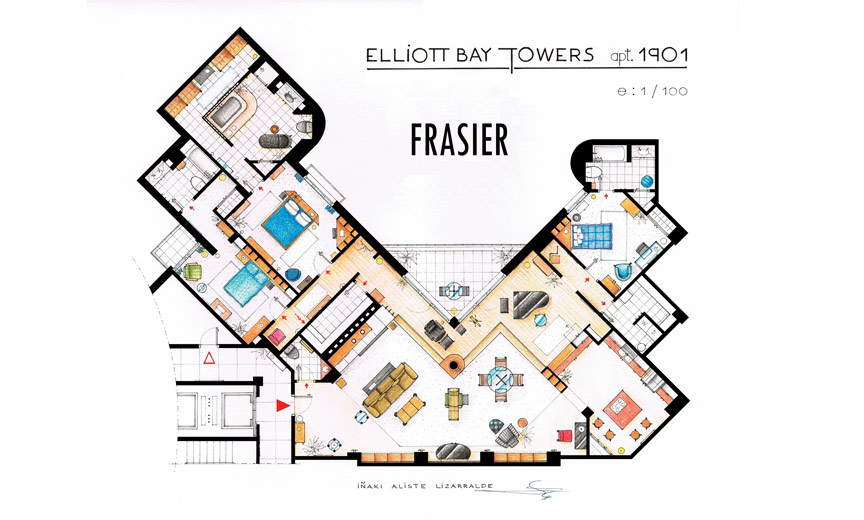 These are by necessity “imaginary” floor plans, which approximate what a home might look like — if the actual spaces weren’t designed to allow multiple cameras, lights, cables and boom mikes to clutter up the space — not to mention the mysteriously absent “fourth wall” which allows viewers to peer inside each dwelling. After hours of laborious research, Aliste sets to work, filling in the missing details with what he calls — with a wink and a smile —“artistic license.”

Has he considered trying to start with the blueprints of the actual sets to get a head start? “Well,” Aliste explains, “they’re not available online and may have only been in the office and workshops of the designers, builders and decorators behind the series, many of which have been off the air for more than a decade.” Besides, he emphasizes, that would miss the point:

“I want to depict these spaces as floor plans of the real houses where the characters live. I don’t want to draw some set where Jennifer Aniston and Courtney Cox played two characters from Friends; I want to draw the apartment where Rachel Green and Monica Geller lived. So we are talking about two different languages: scenography and interior design.”

Each floor plan requires multiple hours that include Aliste downloading a film or an entire series and seeking out online screen captures and photographs. That’s just for the first pass. On the second, he finalizes dimensions and proportions and attempts to put each piece of furniture precisely where the characters interacted with it. Finally, he carefully replicates “the timber, the tones, the colors of the materials, the fabrics and all the details needed to make an accurate floor plan.”

Like many an Old World artisan before him, Aliste does it all by hand. Though for other kinds of projects, he uses every modern advantage afforded by technology, he says, “For these floor plans I was looking for something more artistic and less technical to transmit the personality of the houses with the warmth and imperfections of a handmade drawing.” 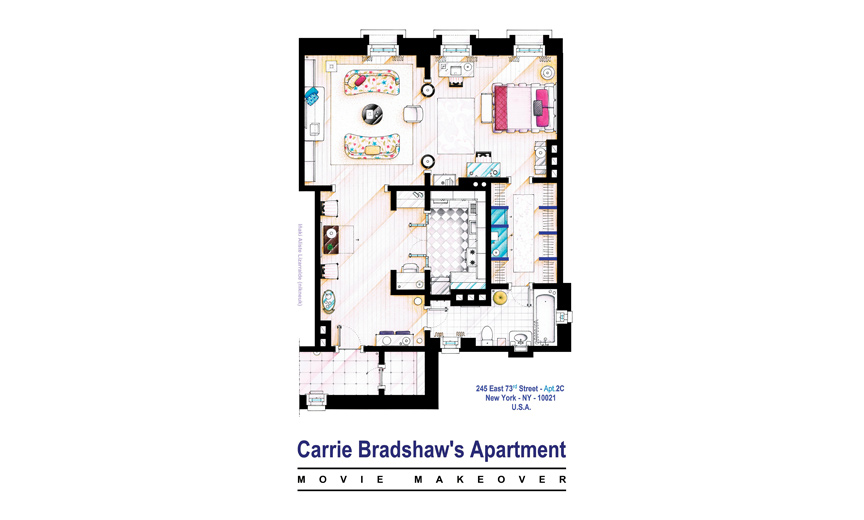 Even with liberties taken, some shows and films have proven impossible to replicate. “I remember working on the houses from Full House and Family Matters. They were narrow up front, but absurdly wide inside. You can’t work on something that defies the rules of logic.” Take for example the house from The Golden Girls. “In the pilot, Blanche’s bedroom appears left of the living room and the other three bedrooms and the bathroom are off a corridor to the right, Aliste offers. “But in the next episodes her bedroom of is situated in the hallway alongside the rest of the bedrooms, so I guess producers and screenwriters thought it would be easiest for the audience to have all the bedrooms along the same hallway.”

Ultimately, it’s a labor of love that helps keep Aliste busy with a hobby that’s developed its own fervent fan base. “I suppose my customers have some kind of emotional tie with a series or movie,” he muses. “Some love the characters and feel identified with them or dream of being like them, including living where they did. A lot of women love the idea of living in New York with a Carrie Bradshaw lifestyle and all her friends. And also they love the idea of living in a New York apartment with a huge walk-in closet. I have actually had people contact me for all the original measurements … with plans to build an actual home. Um . . . to them, I say: Good luck with that.”

Iñaki Aliste’s floorplans can be found on etsy.com at his shop, TVFLOORPLANSandMORE 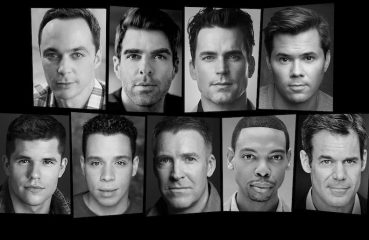 A-List and Gay List: Take a First Look at the New Boys in the Band

If it was a rock band, you’d call it a supergroup: Zachary Quinto, Jim Parsons, Matt Bomer, Andrew Rannells and more are rebooting The Boys In the Band.... 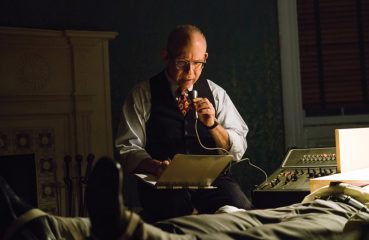 The defining image of documentarian Errol Morris’ Wormwood is Peter Sarsgaard falling out an 11th-story window, over and over. It’d be hard to count the number of times...