Written by Jeffrey James Keyes| October 30, 2019| Things to Do, Travel 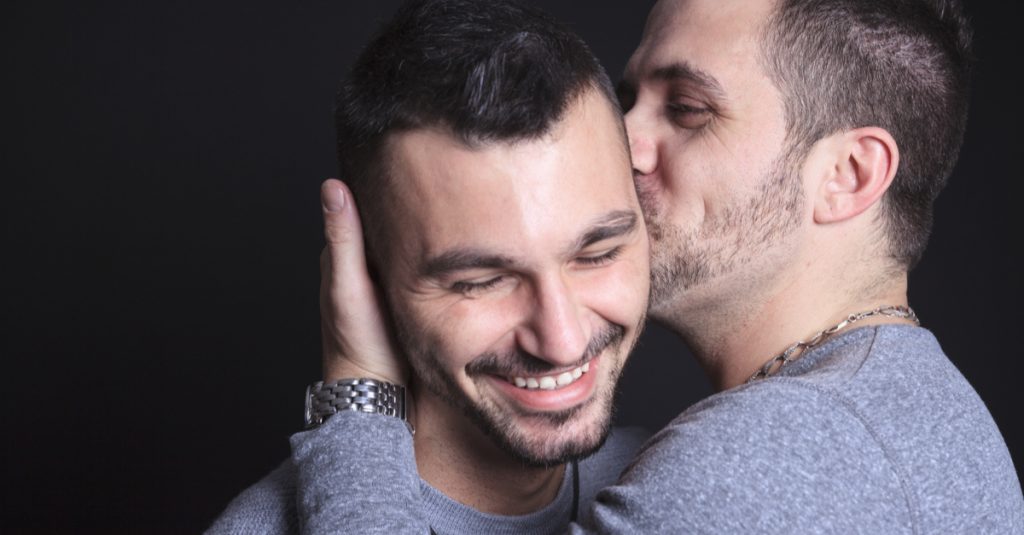 Boston, with its blend of colonial history, cutting-edge innovation, and relaxed style welcomes over 20 million visitors every year. Tourists flock to events that include the Boston Marathon, Pride Week, First Night First Day, Dine Out Boston and Harborfest.

What to Do in Boston

However, Beantown can also prove an optimal city for same-sex couples in search of some historic honeymooning. After all, it’s the capital city of the first state in the nation to legalize same-sex marriage. What’s more Boston is – without a doubt – proud, accessible and welcoming. If you haven’t been before, definitely plan to spend a little time on the Freedom Trail, a 2.5 mile-long path through downtown, featuring sixteen locations considered significant to U.S. History. These sites include the Boston Commons, the Massachusetts State House, Old Corner Bookstore, the Paul Revere House, the USS Constitution, the Bunker Hill Monument and more.

In addition to the Freedom Trail, there’s also the Boston Equality Trail, a walking tour that follows the route of Boston’s first Gay March in 1971 and also includes homosexually historic sites like Jacques Cabaret, Park Square, the South End, the Boston Public Garden and the Massachusetts State House – where state licenses were issued to same-sex couples beginning May 17, 2004. 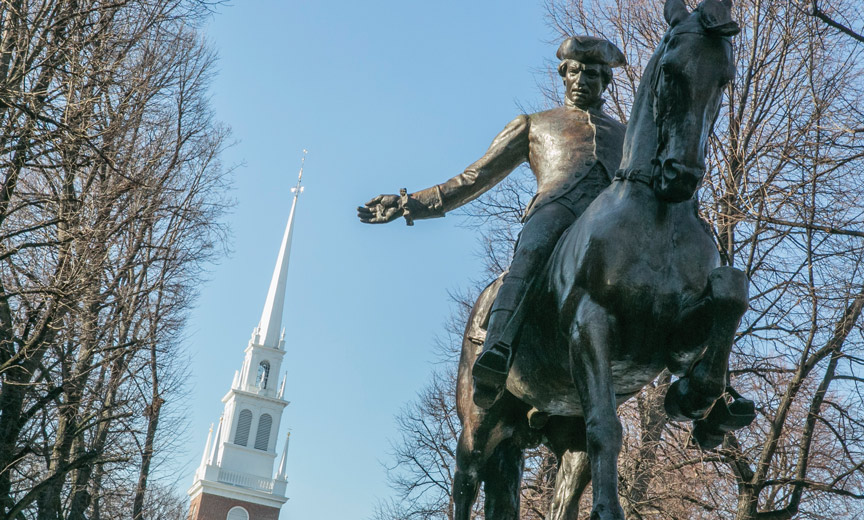 Art lovers can get up close and personal with John Singer Sargent’s paintings at The Museum of Fine Arts Boston. The museum holds the world’s most complete collection of his paintings, murals, watercolors, drawings, sculptures and photographs. Meanwhile, the Isabella Stewart Gardner Museum is modeled after a 15th-century Venetian palazzo surrounding an indoor courtyard garden (prime for Instagram snaps). It features some of the world’s most incredible art collections, including works by Rembrandt, Michelangelo, Raphael, Degas and further pieces by John Singer Sargent (he did consider the city his American hometown, after all).

Looking for a good way to take in more culture without breaking the bank? Pick up a Boston CityPASS in order to gain admission to popular attractions like the New England Aquarium, Museum of Science, Skywalk Observatory, Harvard Museum of Natural History, and take in the city view from the water through Boston Harbor Cruises. If you want to get out on the harbor and explore more of New England’s marine wildlife, Boston Whale Watching Cruise offers a three-hour cruise around the Stellwagen Bank of National Marine Sanctuary where you hop on a high-speed catamaran to spot humpback, fin, and Right whales – plus Atlantic white-sided dolphins and other porpoises. 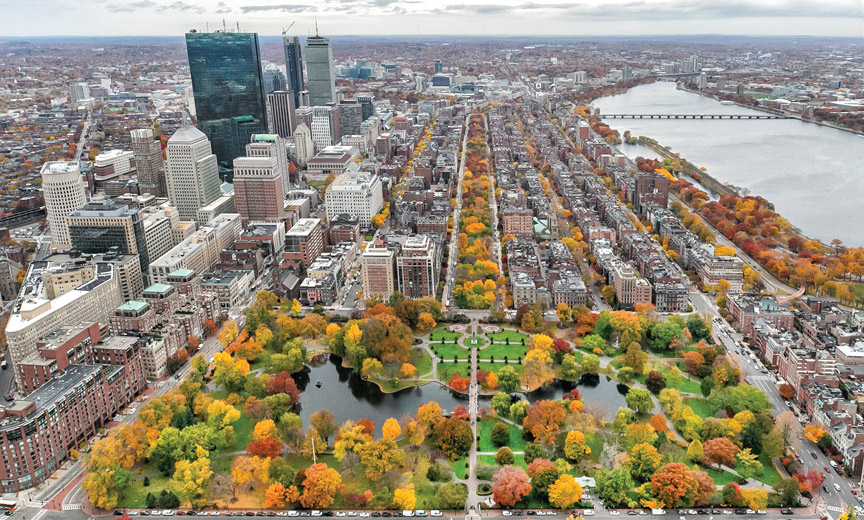 Read Next | This is Why Tourists Adore Gay Amsterdam

Is Cambridge on your mind? Make sure to plan some quality time to take in the Ivy League grandeur of Harvard Square. Take the T to Harvard Square and make sure to build your day around lunch at Mr. Bartley’s Burgers (where they offer what is possibly the best burger in the world). Try to get in on a Crimson Key Tour, where you can gain a comprehensive perspective of Harvard life and don’t miss the opportunity to peruse one of Harvard’s museums. Cambridge is much more than just Harvard, though, seriously. There’s Massachusetts Institute of Technology (with its MIT Museum), Longfellow House (Washington’s Headquarters), Peabody Museum of Archaeology & Ethnology and American Repertory Theater. In on a Saturday night? Plan on checking out The Donkey Show — the disco retelling of A Midsummer Night’s Dream.

Where to Stay in Boston

Looking for the perfect place to stay? We’ve got three to consider: The Envoy is Autograph Collection Hotels’ first Boston property and conveniently located in the Seaport District. It offers a modern design-forward aesthetic and a comfortable easy-going vibe. The 136 hotel rooms are spacious, bright and rich with harbor views. Guests have access to two on-site dining options: Outlook Kitchen & Bar and Lookout Rooftop & Bar where Chef Tatiana Pairot Rosana offers American cuisine with local seasonal inspirations. Rosana was recently featured on Food Network’s series Chopped and won her battle on the episode “Under the Cuban Sun” which featured Cuban chefs using Cuban ingredients. 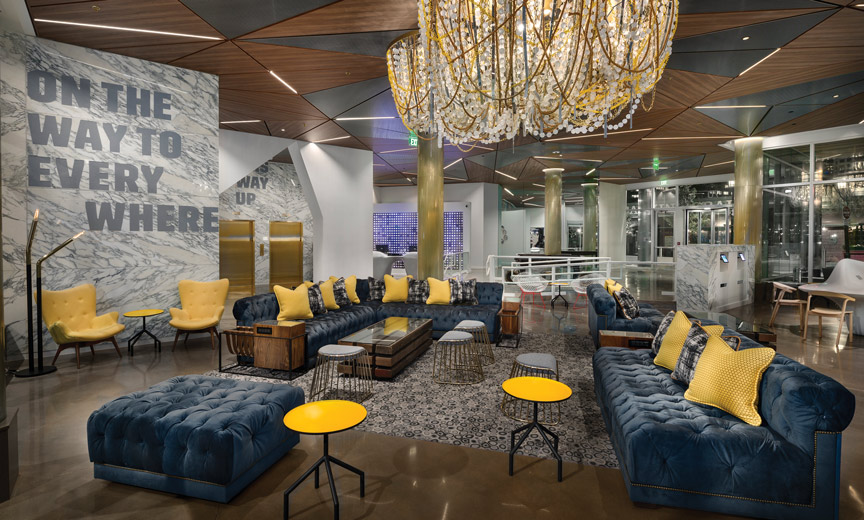 Lookout’s skyline and harbor views make it a perfect spot for an afternoon or after-dinner cocktail on cozy outdoor couches. Want to explore the neighborhood? The Boston Tea Party Ships & Museum is practically in the Envoy Hotel’s backyard. You can’t get more Beantown touristy than getting into a reenactment of the watershed event that changed American history, but why not? History buffs will get a kick out of exploring 18th Century sailing vessels, historic artifacts and the multi-sensory documentary Let it Begin Here. After your walk through history, go ahead and have a cup of tea (never mind the irony) at Abigail’s Tea Room & Terrace, an adorable location to enjoy a few scones, a cup of something warm, or sip Dark and Stormy.

Four Seasons Hotel Boston is one of the more decadent ways you can spend a few nights. This Back Bay oasis is nestled in a neighborhood rich with Victorian brownstones and just a stone’s throw from the Freedom Trail. Take in views of the storied Public Garden, Beacon Hill and the gilded dome of the State House. Be sure to touch base with their wedding specialist to learn more about honeymoon offers, including activities like a couple’s massage and a romantic boat cruise in the Boston Harbor. Nibble on bites and sip luxurious martinis at The Bristol Lounge Bar, known as a meeting spot for “power dining” among Boston’s elite. Or book a treatment through the hotel spa where you can extend your experience with a dip in the heated pool and whirlpool or have a relaxing steam in one of the saunas. 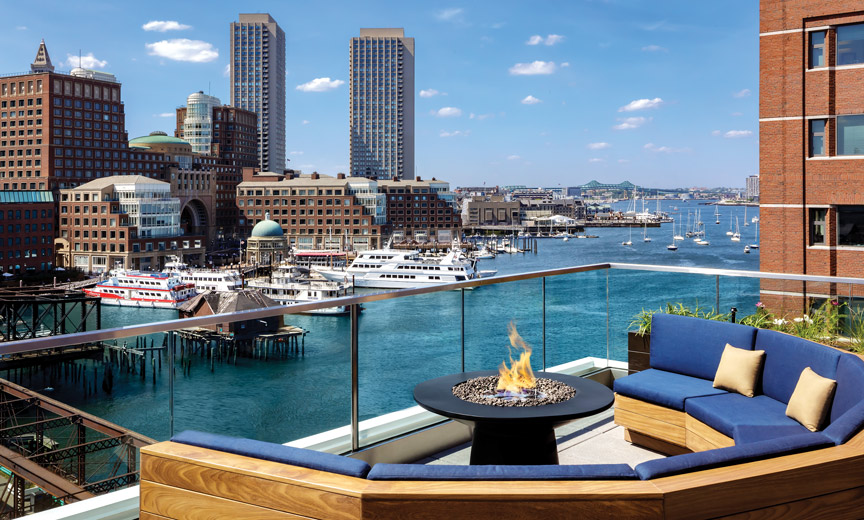 Beacon Hill is synonymous with federal-style row houses and picturesque gaslit streets. It’s home to the incredible XV Beacon, a stunning member of Preferred Hotels & Resorts – in an impressive turn-of-the-century landmark Beaux-Arts building. Book any one of the 63 luxury rooms at this ultraluxe property, and relax with your new spouse in an ambiance that features gas fireplaces, cashmere throws, a pillow menu (yes, they have an actual pillow menu), and rainforest showerheads. Really live it up by booking one of the 475-square foot Boston Common Studios, which feature a sun-filled sitting area and corner views of historic Beacon Street and the Boston Common. Or live even larger in The Bromfield Suite, an enormous luxury, one-bedroom suite that also features a Parlor Room and an imported marble bathroom with a whirlpool tub. Head up to the private Roof Deck to have a glass of champagne and catch the sunset over the “Shining City Upon a Hill.” If you don’t want to stray too far from your suite – you’re honeymooning after all – be sure to check out XV Beacon’s premier steakhouse “Mooo….” (yes, that’s three o’s and four….) for a menu that varies from pancakes to smoothies to a scrumptious Wagyu A5 sirloin dinner. Want to head out and explore the area? Utilize the hotel’s in-town Lexus service to travel in style. XV Beacon is especially welcoming to the LGBTQ community, offering a Preferred Pride Package as part of the Preferred Hotel Group’s Preferred Pride collection, a distinctive group of independently owned and operated hotels. All hotels in this group are either TAG-approved (part of worldwide collection of  LGBTQ welcoming hotels) or members of IGLTA. The package includes a bottle of chilled house champagne and chocolate covered strawberries to sweeten your stay. Enjoy your Beantown honeymoon!