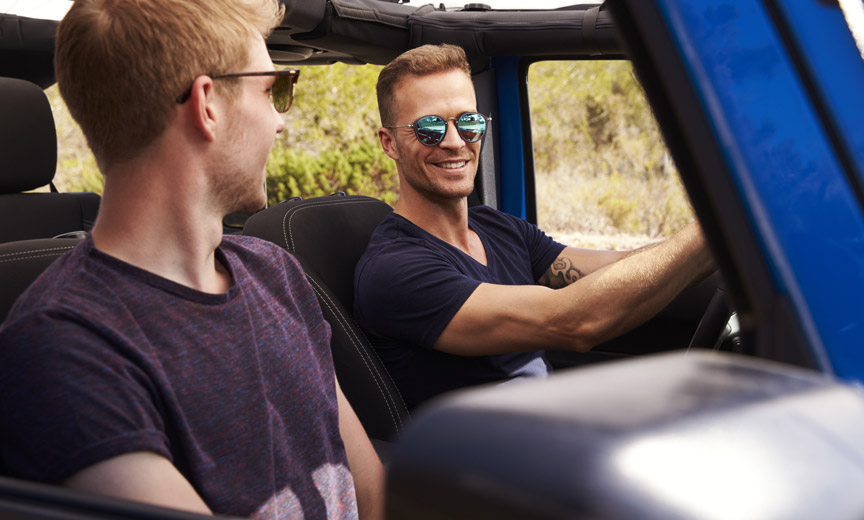 When the world is your office and your spouse is your co-worker, it can be a challenge to finding balance. But it can also lead to some very special moments.

I yanked our SUV hard to the right, sending Gary, our two dogs, 10 suitcases, a package of Twizzlers and my well-stocked cosmetics bag flying. Gary rubbed his head as he popped a Twizzler into his mouth. “That was very Keanu Reeves of you,” he remarked.

At the time, we were driving through the Rockies, and I was struggling with a combination of exhaustion, a sinus infection, writing deadlines and a packed schedule. Nevertheless, we were still attempting to mix some pleasure in with our business travel.

Soon, we were rolling into the little town. Although there were no tumbleweeds, tornadoes of snow made the streets look especially empty. “It does seem like a ghost town,” I said to Gary. “Maybe I should leave you here, so you can get to know the ghosts?”

“Remember Lucy and Desi,” Gary reminded me, and I smiled. One of my favorite movies of all time is The Long, Long Trailer, in which Lucille Ball and Desi Arnaz play newlyweds on a hilariously disaster-ridden road trip. I had first watched it when I was single, hoping I might one day have somebody with whom I could share such adventures. When I finally met Gary, I was thrilled to learn that it was also one of his favorites, and we would both watch it, dreaming of one day leaving our desk jobs behind to explore the country together like they had.

Read Next | Living in a Tourist Destination? Careful What You Wish For

Back then, I don’t think we really thought it could happen. However, it turns out that as an author, a large part of my job requires me to hit the road on a regular basis — for book tours, to lecture, or to teach writing workshops. So Gary and I end up driving across significant stretches of America several times a year. We’ve followed old Route 66, flown over the desert in an open-air biplane, sipped rosé on Rodeo Drive, paddle boarded the Pacific.

But while it’s a dream come true that the world has become our office, this comes with challenges. How do you nurture a relationship when your husband is also your business partner, best friend and (frankly) the better driver? We squabble over hotels (I prefer economical; Gary likes to splurge), meals (I refuse fast food; Gary thinks curly fries are a food group), and even sightseeing (I go for unique, picturesque towns; Gary wants the world’s largest ball of yarn or gas station where “aliens landed”).

In the old mining town, we put the dogs on their leashes and headed out for a walk. We discovered a coffeehouse in a centuries-old building. Then headed over to a frozen lake where a few ice fishermen were sitting around shanties. From the lake’s edge, we watched. The ice glowed blue. Fire lit the shanties. The sun moved across the mountains, illuminating cracks and crevices.

“It’s Monday,” Gary said. “And we’re here.” It’s something we never could have pictured back in our days of offices and cubicles. I grabbed his hand, and we watched an eagle soar around the peaks. Eventually we headed back to the car. “I’ll drive,” Gary said. “You write.”

Read Next | Binge-Watch Guilt: When Must See TV Becomes Too Much

On the Road Again

As the SUV lurched back onto the highway, I tried to focus on my laptop. Gary sensed me fighting a wave of illness. “We won’t stop again,” Gary said. “I promise.”

“OK,” he said with a smile, “only if we can spend tomorrow in Vegas. I want to catch Britney at a buffet.”

As I laughed in agreement, I took a moment to glance around the SUV at my family, my office, my world — and then out my window at the grandeur of the mountains. Once, the idea of living and working all over the country together seemed as impossible as moving a mountain. Instead, we just kept on moving, and eventually found more mountains than we could have dreamed of.