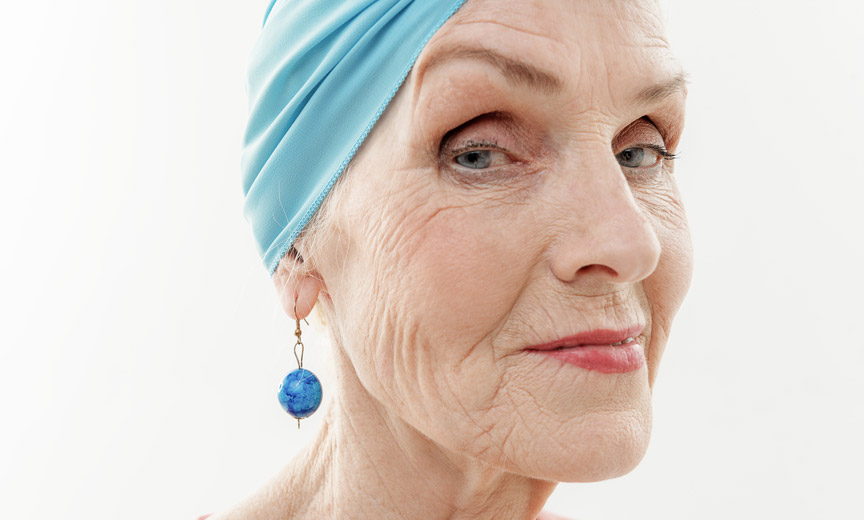 Wade’s visits from his eccentric Great Aunt Blanche gave him some of the happiest moments of his childhood — and the promise of a beautiful future.

Great Aunt Blanche blew into my rural childhood world every summer. In looks and personality, she was a mix of the salty comedienne Phyllis Diller and the actress Brett Somers (who famously traded barbs with Charles Nelson Reilly on Match Game). But, essentially, Blanche was my Auntie Mame before I even knew who that was.

Blanche wore makeup not to enhance her features but to transform herself into someone new on a daily basis. One day, she’d wear a turban and arch her eyebrows like Cleopatra; the next, she would sport glittery eyeshadow and fake eyelashes big as butterflies.

Blanche and her husband Bill annually swooped into my grandparents’ log cabin from LA. They had a multitude of suitcases in hand – some of them dedicated specifically to cocktail fixings. And they would launch into stories about attending BBQs with cousins of Lana Turner or having drinks in Vegas with Mel Torme.

How Dumb Is She?

Blanche and Bill often visited friends and took me along to parties. Blanche taught me how to mix a proper cocktail and tell a good story. When I was with her, I drank Shirley Temples out of glasses decorated with gold-leaf flowers. I also transformed her friends’ straws into “microphones” to do my best impression of Match Game Host Gene Rayburn.

“How dumb is she?” the partiers would answer.

“She was so dumb that when her mechanic told her to turn on her headlights, she lifted up her BLANK.”

The well-served crowd would roar with laughter.

Around this time of year, afternoon storms tended to pop up in our little hometown in the Ozarks. Concerned about tornadoes, Blanche would lead me by the hand to a nearby cave where we’d take shelter. We would sit in near-darkness. The cave walls shimmered like a disco ball, reflecting the light from Blanche’s gold lamé and sequins.

It was there that she taught me her most important lessons. “You listen to me, Wade,” she would say urgently — her face illuminated occasionally by lightning. “You’re different, honey. You’ll have to leave here one day. It won’t be easy, but you’ll have to leave. Go to the city, and then you can start your life — your real life. Promise me you will. Promise me!”

The urgency of her tone would sometimes scare me, but then she would soften her voice and pat my chubby knees, the backs of her big rings cool on my skin. “You may not be my child, but you are more to me than you will ever know.”

“Everyone here just sees black and white, but you see a hundred different shades. I can see it; feel it in my bones,” Blanche explained. “That’s a gift, Wade. But it can also be a curse because it’s always easier to go through life trying to settle, fit in, be numb.” Blanche would pause and look at me thoughtfully. “But then you’d never see the beauty. And Wade, the world is beautiful.”

I listened intently to every word. And then she would go back to telling me stories of run-ins with B and C-List celebrities from what she called old Vegas, the real Vegas, when Vegas was Vegas.”

After I finished graduate school and started working as a writer in Chicago, I wrote to Blanche (who lived well into her 90s) and described my new life in the big city. I received a postcard from her in return featuring a picture of an old woman in a bikini dancing and drinking a martini. “You listened!” it read. “Ain’t life beautiful?”

So nowadays when I’m in Palm Springs and happy hour rolls around, I put on some Frank Sinatra or Dean Martin, mix myself a cocktail and lift a glass in the direction of Vegas to salute the memory of my very own Auntie Mame — and all of the Auntie Mames out there. They showed us that they accepted us unconditionally, celebrated our differences and reassured us that if we were willing to look for it, someday, somewhere there would be a different kind of life waiting for us. And that it was going to be beautiful.

As we’ve spent recent weeks finishing up this issue about 2016’s “People We Love,” it occurs to me that this was also the year I very nearly married the person I love....

When I was a kid, the newspaper was delivered to our door every day; my parents would unfold it at the table and make their way through it, section by section....