Kevin Phinney Finds A Meaning for Christmas All His Own

After a childhood of unhappy holidays, Kevin wasn’t sure why people people said that Christmas was for kids — until one child brought out the kid in him again.

“Christmas is for kids” is a saying that gets a lot of lip service this time of year. I was well into adulthood before I could unpack that idea, however — especially after decades of hearing Nat “King” Cole wishing Merry Christmas “to kids from one to ninety-two.”

My childhood Christmases looked like outtakes from Bad Santa. There was always some sort of drama: My Mom, ripped to the gills, would craft an egg nog with the whites so poorly mixed that you could feel it jump from your mouth to your stomach like a spring-loaded Slinky.

My parents also had a penchant for dragging home friends for a nightcap, and waking us from slumber to play welcome wagon. Our rogue’s gallery included “Aunt Judy” — a 60-something spinster given to fishnet hose and skirts so short you could see clear to New Year’s whenever she poured herself out of her ‘67 Mustang. One sister recalls another sibling shaking her out of a sound sleep to this: “Come quick! It’s snowing and Dad is fighting Fernie and Joe in the front yard!”

While the ‘rents were busy boozing, we got into our own fair share of trouble. One joyous yuletide my younger sister rollerskated through the living room into the Christmas tree and set our curtains on fire. Fun for young and old. 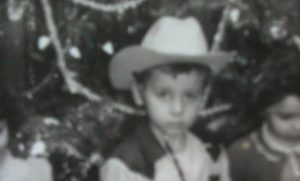 Kevin Phinney, wearing the saddest face ever recorded in front of a Christmas tree.

Later when my mother ran off with another man, my stepfather swiftly remarried and sent my two youngest sisters (of the six of us, the only ones who were biologically his) to a children’s home to spare his new wife’s “nerves.” He brought them home on Christmas Eve but decided to take them back by the end of the day — although we all wailed and begged him not to. When I left for college ­­— leaving my five younger sisters behind — I assumed I was done with kids and Christmas forever.

Flash forward to my partner David, who I met in the eerie dawn of Ronald Reagan’s “Morning in America.” MTV still ran music videos, Drew Barrymore’s only arm candy was E.T. and Bruce Willis had hair he grew, not bought. Our lives revolved around our jobs, playing Pictionary and perfecting the watermelon margarita. Then about five years in, I met an eight-year-old named Ben while babysitting for a group of telemarketers when their regular volunteer fell through. Ben attached himself to my ankle so I had to move through the room like a car booted for parking violations. When his Mom came to retrieve him, she explained Ben didn’t have a dad because his father abandoned them while she was pregnant. I began bringing Ben to the movies with us or to swim in our apartment’s huge pool. His Mom had a gay brother, so she felt at ease with Ben staying over with David and me. She may actually have had an easier time of it than David, who wasn’t sure what to make of our newest family member.

Ben and I were often mistaken for biological father and son — to our mutual delight. Ben had my walk, did impressions of me and shared my sense of mischief. Because his favorite cereal was Cracklin’ Oat Bran, he’d point to it on the supermarket shelf and tug on my sleeve. “Daddy, Daddy! More Crack!” — leaving the other shoppers in mute horror.

Before long we rededicated a room in our home for Ben, who began spending every other weekend with us. Then he asked if he could stay over on Christmas Eve. Initially, his Mom seemed a bit hurt, but since she could see Ben was feasting after a lifetime of being Daddy-deprived, she agreed.

I bought us all matching nightshirts and got Ben his own stocking for the mantle. David and I delayed decorating our tree so that Benjamin could take part. We had the requisite egg nog, cookies and Christmas music, and every few minutes Ben would shake a present marked for him and plead to open it early. I think I smiled so much that night my face hurt the next day. These memories are among my most cherished because they finally provided the holiday magic that eluded me in my own childhood.

Now that my sister’s children have children of their own, I get pictures of them opening presents and holiday memories — good and bad — come flooding back. Disparate as they are, there’s a common theme that unifies them for me: Christmas is for kids — not just children, but anyone “from one to ninety-two” seeking to celebrate the holidays. These days, I tend to get up Christmas morning, call my family, take in a movie and find a quaint restaurant serving Christmas dinner. I’ve replaced the chaos of Christmas past with something close to serenity, and the kid in me thinks that’s just awesome.

Wade is convinced Gary has gone too far with an unexpected holiday gift for his parents, but their reaction turns out to be the real surprise. “No!” I said to Gary and the dog...