Remembering the Beginning of AIDS

Though it tackles difficult subject matter, this gripping book offers an important, transporting journey back to a troubled time.

Visions and Revisions: Coming of Age in the Age of AIDS — by novelist and critic Dale Peck — is a thought-provoking read. The book is both a memoir and an essay that describes Peck’s personal account of his younger years, during which the AIDS epidemic reached its height and activists were marching forward with intense purpose. 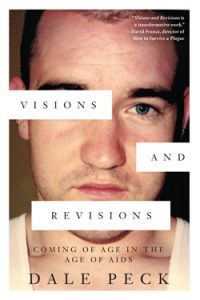 The book moves from 1987 to 1996. At first, we follow the author’s exploration of the efforts of the AIDS Coalition to Unleash Power (ACT UP), a group Larry Kramer formed to fight for people living with AIDS. That time in gay history was incredibly bleak — with no effective treatment available for HIV and young gay men dying in unbelievable numbers. ACT UP was intended to force governmental agencies to create and make available medications that could help. The anger and sadness is palpable as Peck recounts how he walked alongside the body of deceased activist Mark Fisher — “up Sixth Avenue at rush hour for more than 50 blocks and watched thousands of people look at his face through the clear top of his coffin, and those people had not cared.”

Peck creates such real, emotional scenes that the reader is transported right back into that troubled time in our history. In one captivating chapter, the author recounts meeting activist Derek Link. “He was the first person I slept with who told me he was HIV positive,” Peck remembers. This is especially powerful when you recall that during this time HIV was, for all intents and purposes, a death sentence.

At times engrossingly easy to read and at times extremely emotionally difficult, Visions and Revisions is so intimate that it feels almost like reading someone’s diary. It is a powerful reminder of how far we’ve come in our treatment of and attitudes regarding HIV and AIDS. In addition, Peck’s smart, compassionate, insightful book reminds us that, though that journey has been long and hard, it is something to be remembered and to be proud of.

He won our hearts in Mean Girls and made TV history playing Eddie Bear on Looking. That show may have seen its last season, but Daniel Franzese’s awareness-raising mission goes...

What Goes on at an AIDS Conference?