This Is What Gay Travelers Love about Zagreb for the Holidays 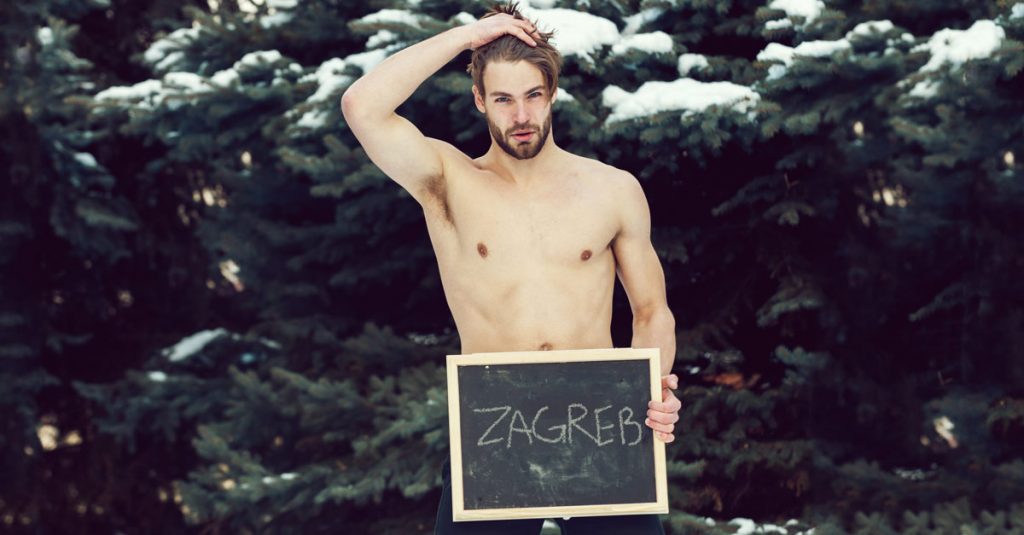 They call it the city with a million hearts. At the holidays, it just might steal yours.

Christmas can unleash your inner child and all the holiday trappings that go with it. They’re an easy bunch to identify, with their Santa hats, gingerbread houses, peppermint stick cocktails, and decorations designed to outshine Rockefeller Center. If this describes you or someone you know, consider Christmas in Croatia.

The City with a Million Hearts

Island-hoppers know Croatia is actually 1,244 little land masses — strung like emeralds along the Adriatic coast. It’s familiar terrain to fans of Game of Thrones and Star Wars. Dubrovnik has served as locations for both, securing its reputation as one of the most beautiful destinations in Westeros and the glories of a galaxy far, far away. 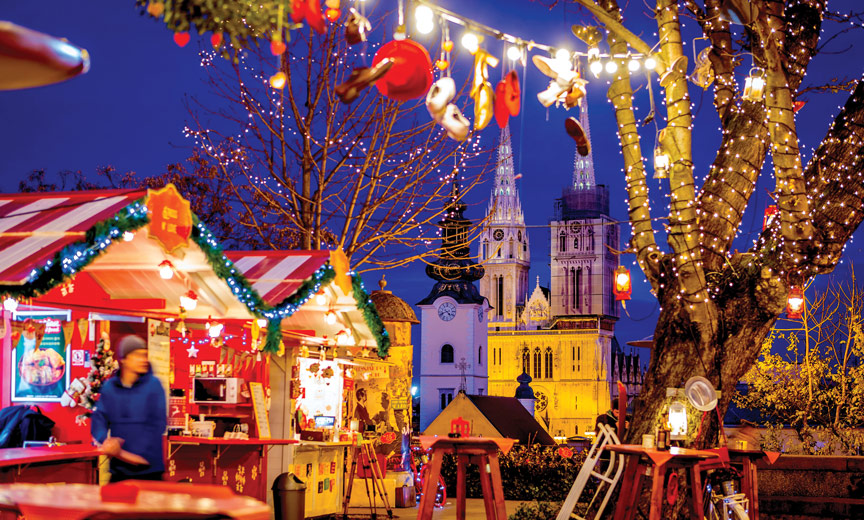 Croatia also claims ten UNESCO Heritage Sites and eight national parks. But, at Christmastime, it’s all about Advent in Zagreb.

Some years ago, my father spent an academic sabbatical in Zagreb. Then, in a move that initially confounded the rest of the family, he returned there for another year-long sabbatical a short time later. Clearly he had fallen under the city’s spell. That certainly includes the winter holiday season when Zagreb celebrates Christmas in ways that evokes my father’s own childhood.

Anyone who wanders the Croatian capital during winter will recall Zagreb’s signature Licitar hearts. The omnipresent sweet honey dough confections adorn Christmas trees and provide the sobriquet “city with a million hearts.” 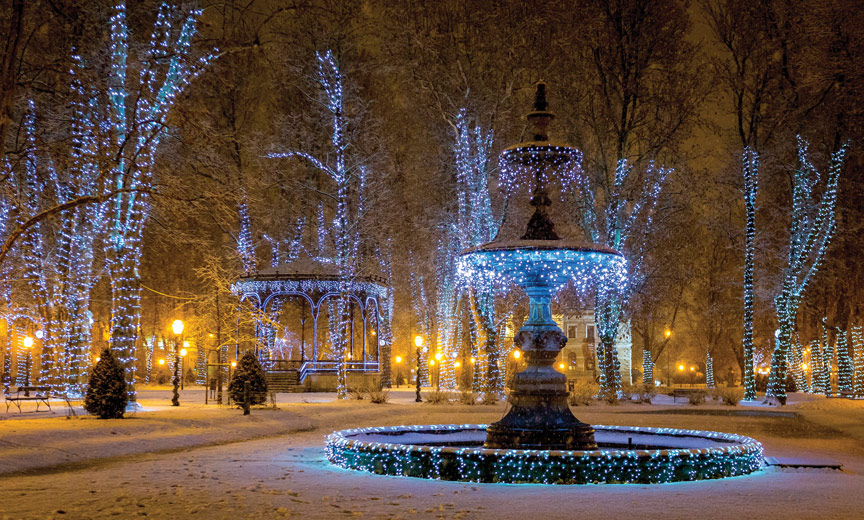 Situated in the northwest of Croatia, Zagreb is notable for its 18th- and 19th-century architecture from the Austro-Hungarian Empire. Its medieval center, known as Upper Town, perches atop a hill overlooking Lower Town. During the height of the Yuletide, Upper Town resembles an enchanted Christmas village, not unlike the one depicted in Dylan Thomas’s A Child’s Christmas in Wales.

More than a Market

Every year of the last three, Zagreb has won the title as Europe’s Best Christmas Market. The appellation is something of a misnomer for a citywide celebration that transforms Zagreb into a six-week street party.

Consider, for example, what the locals refer to as Fooling Around (Fuliranje), a music and culinary festival held in the heart of the city that attracts international DJs, performers and bands complemented by food from top Croatian chefs and restaurants. 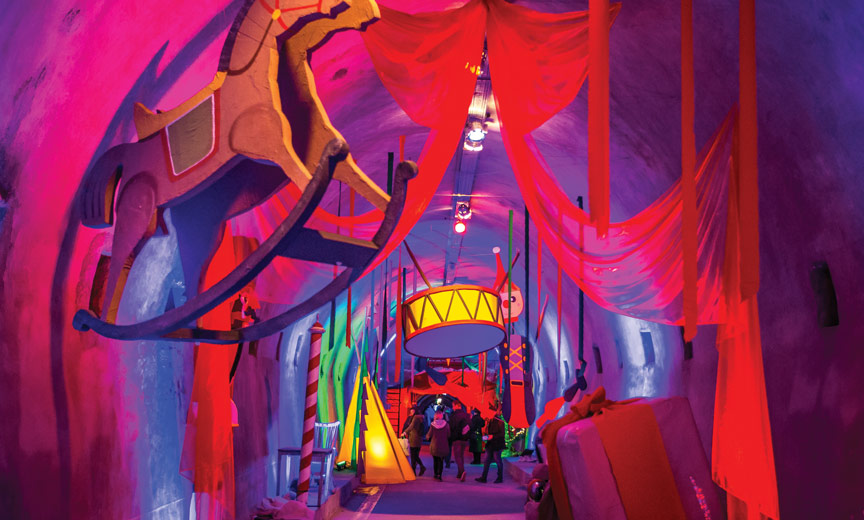 Then consider that this is but one part of the city’s annual Advent festival. Commencing on the last day of November and continuing through the first week of the New Year, Zagreb transforms itself during Advent into a winter wonderland that shimmers in the glow of illuminated trees and twinkling lights — all thrumming with their own distinctive Croatian beat.

Each year, nearly a quarter of a million LGBTQ travelers visit Croatia, which has been designated as one of the EU’s more progressive societies in its regard for equality. Homosexuality was removed from the list of medical disorders in 1973 — nearly 20 years before the World Health Organization followed suit.

Comprehensive anti-discrimination laws have been on the books in Croatia for more than 15 years and LGBTQ+ people serve openly in the military. As the Croatian Minister of Tourism asserted in 2012, all LGBTQ+ visitors are welcomed in Croatia. 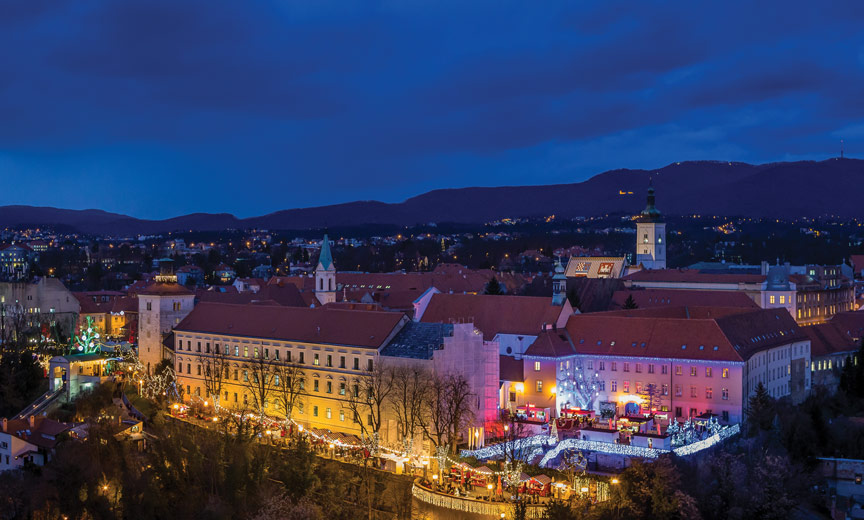 In 2002, Zagreb hosted its first Pride festival in Zrinjevac Park, one of the city’s most romantic retreats — complete with a music pavilion, numerous fountains and monuments, and an allée of more than two hundred plane trees.

Throughout the holiday season, the park’s plane trees are illuminated with thousands of white lights, while the 19th-century music pavilion rings with Christmas standards and waltzes. On the nearby King Tomislav Square, a massive ice park fronts the city’s majestic Art Pavilion that becomes a winter palace in the crystalline night.

Regardless of where you roam during the holidays in Zagreb, it’s best to follow your nose. The city’s numerous cafés and coffeehouses serve peppery gingerbread cookies, vanilla crescents, walnut and poppy seed rolls — delicious with coffee, perhaps even better when consumed with mulled wine with ginger, herbal schnapps and hot mulled gin. 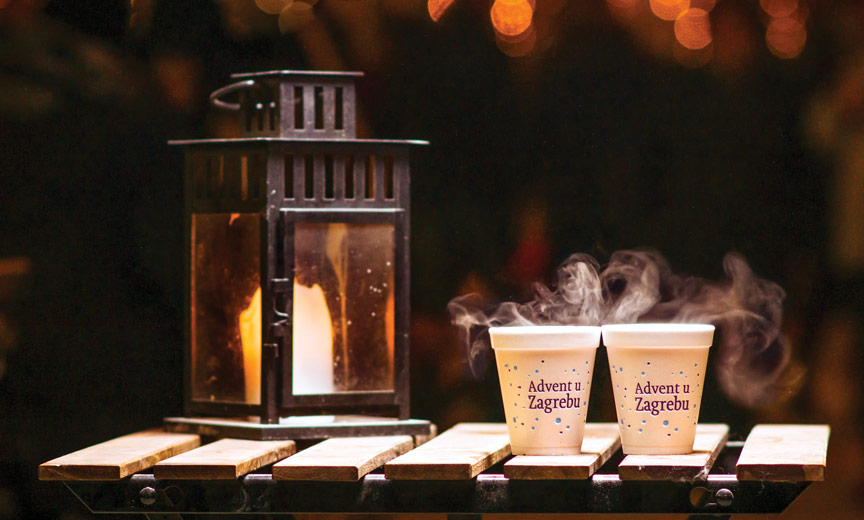 Since 1926, Dolac Market has been Zagreb’s major marketplace for farmers from surrounding villages. Adjacent to the city’s bustling Ban Jelačić Square, the market offers a covered food hall for butchers, fishmongers and florists.

According to Zagreb local Nena Komarica, one of the best ways to enjoy a winter’s day in Advent is to “mingle with the locals at the Dolac farmers’ market fragrant with spices and mulled wine and music.” When you’re ready to warm up, duck into Palace Hotel Zagreb for a cappuccino and croissant amidst the Art Nouveau splendor, which dates back to 1891.

Weary after walking? From Zagreb’s central square, take the Merry Christmas Tram for a 25-minute jaunt through the city’s Yuletide pleasures. Or try Zagreb’s funicular, which started service 1890 and is one of the world’s shortest at 220 feet.

Although Zagreb attracts nearly a million visitors annually, Advent in Zagreb maintains civility. Martina Bienenfeld, CEO of Zagreb Tourist Board attests, “While many European capitals are overcrowded and overpriced in the run-up to Christmas, Advent in Zagreb offers room to move as well as value for money.”

The icing on the Christmas cookie? Zagreb is home to a vibrant LGBTQ+ scene that includes cafés, clubs, and bars. Queer Zagreb also sponsors such cultural events as the documentary film festival ZagrebDox in February and a Festival of Lights in March.  “In winter, the city of Zagreb becomes a glittering, magical place.” Bienenfeld promises.

* All internal photos courtesy of the Zagreb Board of Tourism