Our “Legendary NYC Drag Queen We Love” Vote is Closed! 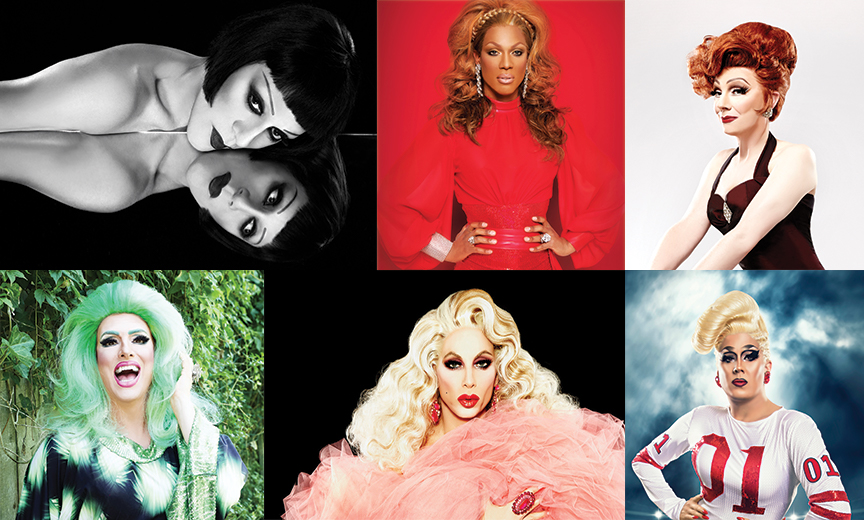 An Election We Can All Get Behind!

In the city that never sleeps, drag culture rules.

Bow down to the queens who have paved the way and survived decades of change in NYC.  We love all of these queens, but only one of them will win the title of “Legendary NYC Drag Queen We Love!”

Voting is now closed!  Check back on January 16th to see which queen took the title!

Congratulations to Svetlana Stoli and their guest who will help us honor the winner at our gala event on January 15, 2019!

Who’s on the ballot: 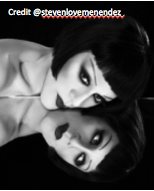 A fixture of New York City’s vibrant downtown performance scene for 30-plus years, Joey Arias is a bona fide NYC icon. Arias has performed worldwide at venues including Carnegie Hall, The Freedom Theatre in London and on a transatlantic world tour into the cabaret clubs of Paris, Tokyo, Moscow, Germany, Finland, Estonia, Canada and England.

On film, he has appeared in Mondo New York, Big Top Pee Wee, Elvira, Mistress of the Dark, Wigstock – The Movie, Flawless and To Wong Foo, Thanks for Everything! Julie Newmar. Television credits include the infamous Saturday Night Live episode with David Bowie and Klaus Nomi, Ann Magnuson’s Vandemonium (Cinemax), Elvira’s MTV Halloween Special, HBOs Dragtime, HBO’s Real Sexand Gayer Than Gay on VH1, along with numerous appearances on a wide variety of talk shows and programs.

Additionally, Arias has produced several of his own recordings including Arias on Holiday, Strange Fruit, Jazzo Lozo, God Shave the Queen and live recordings of StarLust in Berlin, Arias with a Twist and Bar D’o in New York. 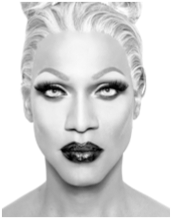 Shequida, is a classically trained opera singer, songwriter, playwright, and drag artist, from Jamaica. An attendee of Juilliard, Shequida studied with noted bass-baritone Simon Estes. Shequida has been the USA Network’s spokesperson for Latin America.

From 1997 to 1998, Shequida played Wendi Mercury on the daytime television show One Life to Live and played the title role in Daron Hagen’s opera, Vera of Las Vegas for its world premier in 2003. Shequida’s Off-Broadway show, Opera for Dummies, was nominated for a GLAAD Media Award.  In 2008, Shequida appeared on the TV reality competition America’s Got Talent, getting into the Top 40 for the third season. Shequida has performed all over the world and speaks 5 differently languages.

As (People We Love Honoree) Michael Musto said “with that voice, Shequida brings together the unwashed masses and bourgeoisie with applause.” Shequida currently performs and hosts events weekly all over NYC. 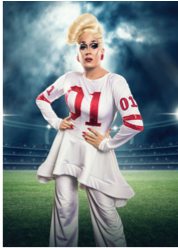 Tina Burner is a New York City based drag entertainer/producer.

Today she is a staple in the New York drag scene with her one of a kind comedy, wit, costumes, and new shows. Tina has used her drag platform to skewer sensitive subjects and political matters for the past eight years.  A winner of numerous titles and crowns, she most recently won Miss Fire Island 2018 and Overall Presentation and 2nd Runner Up at Nationals for the Miss Comedy Queen 2018 pageant in Orlando, FL. Tina’s polished, sharp, witty and loves to make everyone’s day a little brighter.

Catch her most nights throughout NYC. Check out her calendar on www.tinaburner.com or on any social media platform (@thetinaburner) to catch this entertaining queen in action at one of her live shows. 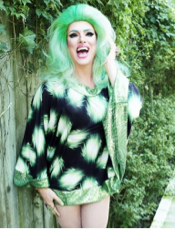 Hedda has performed with the likes of Sarah Jessica Parker, Tyra Banks, Vanessa Williams and Madonna on such television shows as Project Runway, Sex and the City and the MTV Movie Awards. She has also appeared on such networks as Logo TV, the Sundance Channel, and Bravo. Hedda contributes to the GLAAD Award-winning Derek and Romaine Show and was cast in Musical Chairs (2011), Go Go Crazy (2011, from the producers of The Big Gay Musical), Violet Tendencies (2010), The Look (2003) and To Wong Foo Thanks for Everything, Julie Newmar (1995).

Locally, Hedda hosts the regularly sold-out shows, Lettuce Rejoice and Hedda Presents the Classics. Her artistic works are on permanent display at East of Eighth in Chelsea. Miss Lettuce has had the pleasure of working with charity and community events of notoriety. She is also an ordained reverend performing weddings for all couples. 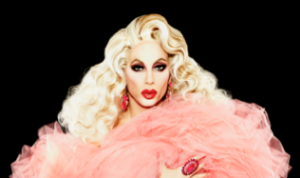 Sherry Vine recently celebrated 25 years of performing and was named Drag Legend by The Glam Awards.

She was born in 1992 in Los Angeles but soon after packed her RV and headed East to form Theatre Couture with Douglas Sanders, Joey Gross, Joshua Rosenzweig and Erik Jackson.  As co-Artistic Director, Sherry co-produced and starred in all of their productions including; The Bad Weed ’73, e.s.p., The Final Feast of Lucrezia Borgia, Kitty Killer, Charlie, Tell-Tale (off Broadway), Doll and Carrie.

Sherry’s first club show in NYC was in Linda Simpson’s Channel 69 at the Pyramid Club.  She quickly became a sought after club persona and showgirl performing regularly at Boy Bar, Squeezebox, Jackie 60, Tunnel, Limelight, Wigstock and every truck stop in-between.  In 1993, Joey Arias happened to be in the audience as Sherry was singing La Vie En Rose for Florent’s Bastille Day event.  Miss Arias invited Miss Vine to join her and Raven O at the legendary Bar d’O and it was here where Sherry honed her comedic skills and wrote her first parody, Corn.

Throughout the late 1990’s, Sherry became known as The Queen of Broadway (given to her by her drag mother Raven O) for her character portrayals and over-the-top dramatic torch songs.  The union of Joey Arias and Sherry Vine has yielded 5 World tours;  Ladies Sing The Blues, StarLust, SINsation, Looking Back At The Future and Cherchez La Femme. Sherry also travels the globe with her solo shows and has been seen all over North America, Europe, Japan, Israel and Australia,  Sherry can be seen in numerous films; JUST FOR ONE DAY, WELCOME TO NY, WIGSTOCK, THE RASPBERRY REICH, STONEWALL, CHARLIE, SCREAM TEEN SCREAM and FRANCESCA PAGE.

Miss Vine appeared on TV strutting her stuff on Project Runway, “doing Madonna” on the MTV Awards and “playing Jo” from The Facts Of Life on Transparent. In 2009, she became a “YouTube sensation” with her video parodies which have received almost 18,000,000 hits. 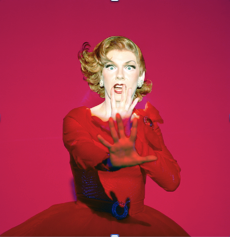 Lypsinka (John Epperson) is an American drag artist, actor, pianist, vocalist and writer. He was born in Hazlehurst, Mississippi.  Lypsinka first appeared in 1982, and for the first time Off-Broadway in September 1988 when Epperson’s performance I Could Go On Lip-Synching! was a late-night addition to the bill of Charles Busch’s Vampire Lesbians of Sodom at the Provincetown Playhouse in New York.

She has appeared in several evening-length solo shows Off-Broadway since, including Lypsinka! The Boxed Set (Drama Desk nomination for Best Sound Design) and Lypsinka! As I Lay Lip-Synching, Lypsinka! A Day in the Life (Drama Desk nomination for Most Unique Theatrical Experience), The Passion of the Crawford and Lypsinka! The Trilogy. For his show Lypsinka! The Boxed Set, Epperson won the Los Angeles Drama Critics Circle Award for Best Sound Design, the LA Weekly Theater Award for Best Solo Performance, and the Helen Hayes Award (Washington, DC) for Best Non-Resident Production in 2003.

His original musicals Ballet of the Dolls  and Dial ‘M” For Model played at The Pyramid Club and La Mama in the 1980s.  A Medea parody My Deah was an Obie Award-winning production in 2006.  Epperson appears in the 2010 film Black Swan as a rehearsal pianist. In 2015, he played Queen Aggravain in the Off Broadway revival of Once Upon a Mattress. During 2016, he appeared at Feinstein’s/54 Below and Joe’s Pub in his cabaret show John Epperson: The Artist Principally Known As Lypsinka. In early 2017, he acted a male role in a play by Wallace Shawn, Evening at the Talk House, which was performed with Shawn, Matthew Broderick, Larry Pine and Jill Eikenberry.  Also in 2017-18, he was the guest curator of the Club 57 film series “You Are Now One Of Us” at the Museum of Modern Art and Cross-Dressing On Film at Anthology Film Archives.

Lady Bunny has asked to be removed from the vote. Because we love her so, we still want to give her a shout out. <3 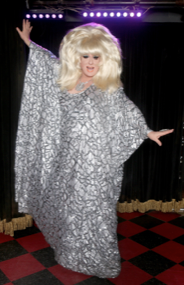 Her glitzy outfits, sky-high wigs and false eyelashes are long enough to embarrass Tammy Faye Baker, but multi-talented drag artist Lady Bunny can turn heads even if looking glamorous was her only talent.

But “she” isn’t just another man in a dress: Bunny is a successful comedienne, DJ, actress, singer/songwriter and most famously, the emcee and creator of Wigstock, the outrageous drag festival of drag and music which electrified New Yorkers every Labor Day for over 20 years.

Invited guests to our gala on January 15th, 2019 include: